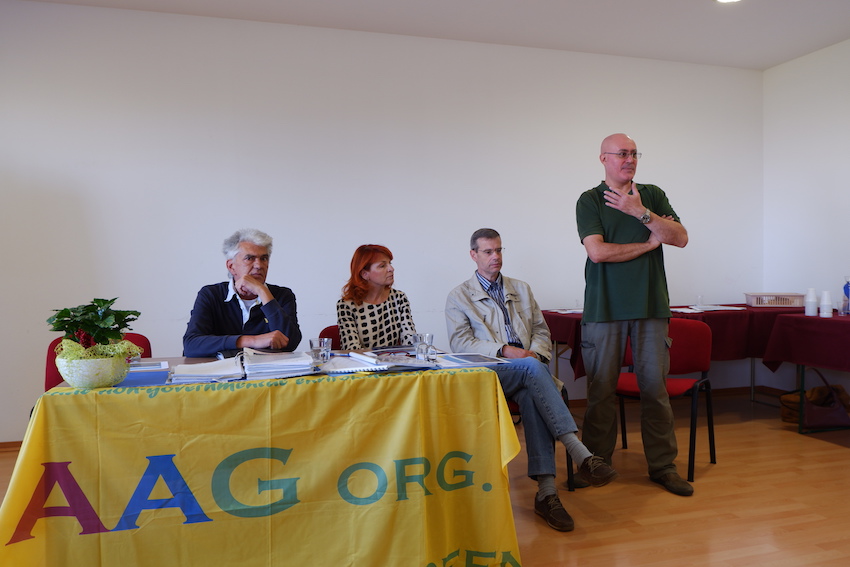 Alpe Adria Green awards merit certificates to the activists who distinguished themselves in the legal battle against LNG terminals in Trieste after Spanish multinational company Gas Natural withdrew the project (13 October 2018).

I have recently received the Regional Administrative Court for Lazio’s decision ending the long stand against Gas Natural. The Spanish company planned to put LNG terminals in Trieste’s ports.

It’s been a harsh battle: it lasted from 2005 to November 2018. Now the Spanish multinational company has ultimately given up.

This victory is decisive for the fate of Trieste’s international Free Port of Trieste.

Indeed, Italian politicians would have gladly sacrificed it to Italian interest. The plan was simple: turning Trieste’s port into the Mediterranean’s main energy hub and getting rid of its free zones.

Starting from the Northern sector (the so-called “old port”). As for the Southern (New) Free Port, the plan was turning it into an oil and gas terminal, and “empowering” the industrial facilities nearby (the Ferriera – Ironworks and the incineration plant).

As for the valuable trade routes, they were to be diverted on Italian port: Venice, Ancona, Bari, Taranto, Genoa, Gioia Tauro.

Trieste’s future was arbitrarily cast accordingly to Italian interests. All of this in breach of its legal status: Trieste is a State, and its international Free Port only exists as its State Corporation.

In the Italian plan, Trieste would be suffocated with high-risk industrial activities: the handling of fuels (a gas and an oil terminal cannot coexist with other trades) and other invasive, polluting activities (again, the Ironworks and the incineration plant).

I told the story of this stand against the LNG terminal in my investigative book “Tracks of Legality”. It is the story of a battle fought by few against many.

It all changed because of the early oppositions and effective reactions of two environmental organizations. Alpe Adria Green on one site, Greenaction Transnational on the other. Side by side, they kept standing, never to give up. The European Commission took action: Gas Natural’s supporters started to shift away.

In the end, as always (in the midst of the elections, no less) Italian politics predictably switched sides. Suddenly, all parties were against Gas Natural’s “dead” project. An easy turn, just to collect a couple of votes. And make the citizens forget that this was the same politicians who endorsed Gas Natural.

Still, it worked smoothly. The mayor, once the LNG terminal’s supporter, remained in office opposing to it. All thanks to the local press, of course. The same press responsible of minimizing the environmental organization’s legal battle against the Gas Natural’s project.

Indeed, the press presented any opposition to the project as meaningless, dismissing Alpe Adria Green and Greenaction Transnational’s best efforts.

Alpe Adria Green is an environmentalist federation based in Slovenia. Greenactions Transnational joined it. In 2011, Greenaction Transnational has also re-opened Question Trieste in the present era, right before the European Parliament.

The Italian Ministry for the Environment’s own documentation provides a valuable insight about the two environmentalist organizations in the question of LNG terminals in the Gulf and in the Port of Trieste. Alpe Adria Green and Greenaction presented 20 of the 29 oppositions to Gas Natural’s project as part of the public E.I.A. (Environmental Impact Assessment).

In 2009, after the Italian Ministry for the Environment’s shocking favorable opinion to Gas Natural’s project, it was again those two organizations to denounce the scandal to public opinion. The environmental impact study contained scandalous falsifications.

The two organizations sought and obtained the Slovenian Government’s intervention. Slovenia declared to be agains the LNG terminals.

Brussel took the complaints seriously, opened investigations, and infringement proceedings against Italy. Even Slovenia, like the two organizations, opened a dispute against Italy before the E.U.

This was a first time in E.U. history. Never before two Member States opened a dispute following a failure to implement a crossborder E.I.A. (LINK). Alpe Adria Green and Greenaction’s complaints are pilot procedures to improve E.U. legislation on this subject.

On January 22nd, 2013, the European Parliament’s Committee on Petitions openly discussed the LNG terminal project in Trieste’s port. For the first time, the appellant (Roberto Giurastante) raised the question of the international Free Port of Trieste. Legally, the area is a State Corporation of the present-day Free Territory of Trieste.

At the same time, Greenaction impugned theItalian Ministry for the Environment’s decree that ruled the project compatible with the environment. The Regional Administrative Court for Lazio ruled the case admissible. And Slovenia joined the legal action.

This is the actions that effectively froze the project of a LNG terminal in Trieste’s port. As years passed, the project faced more and more difficulties.

This is the same years during which Alpe Adria Green and Greenaction’s indomitable environmentalists withstood repeated intimidation attempts. Their “crime” was “daring” to resist the lobbies of energy.

Those environmentalists are the “unknown” heroes in this long struggle for legality.

Image: the E.I.A. Commission of the Italian Ministry for the Environment’s the favorable opinion to the LNG terminals. After the Ministry itself approved the project (Alpe Adria Green and Greenaction presented 20 of the 29 opinions against it), and regardless multiple breaches of the crossborder E.I.A. procedure, finally, the European Commission and the Committee on Petitions were informed of the case. 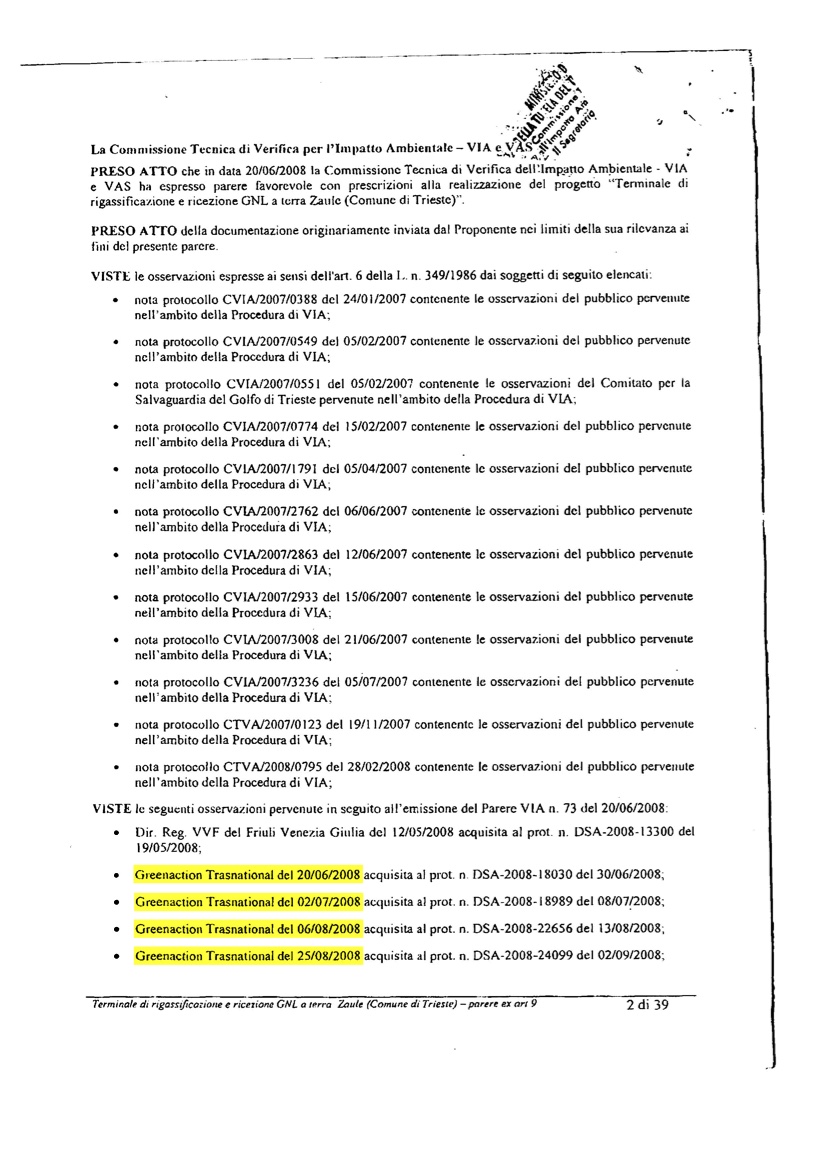