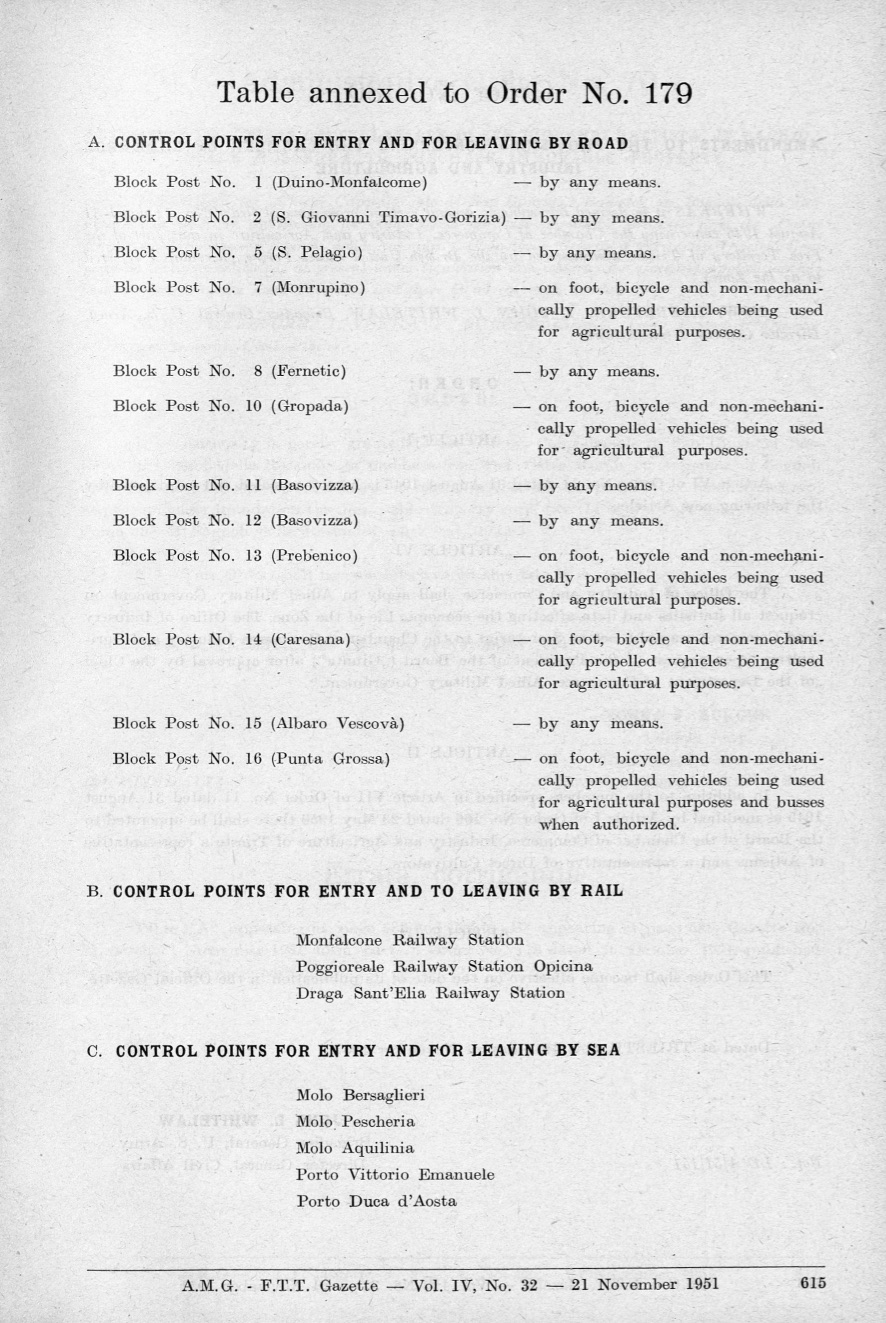 The current health emergency caused by the COVID-19 (Coronavirus) pandemic has proven the relevance of the lack of the necessary health checks on the State border of the present-day Free Territory of Trieste with the Italian Republic.

The question was addressed to the Italian Government, in its role of provisional Government of the Free Territory of Trieste, by the I.P.R. F.T.T. when, on March 9th, a Decree declared the state health emergency and established quarantine to face the pandemic outbreak of the Covid-19 virus (LINK).

The I.P.R. F.T.T. (which has already summoned before Court the Italian Government for its defaults in the administration of the Free Territory of Trieste, which is forced to pay the illegitimate taxes of the Italian Republic) has officially requested that, given the seriousness of the situation, with Italy being the European country affected the most by the epidemic, the appropriate health checks be established on the Free Territory of Trieste – Italy State Border. The same way as did its other bordering (Slovenia) and neighbor States (Austria, Croatia).

Also, it is since 2016 that the Free Trieste Movement requests the the terrestrial and maritime border crossings (including those of the international Free Port of Trieste), which are established by art. 4 and art. 21 of the 1947 Treaty of Peace with Italy, are correctly marked by the Italian Government in compliance with its obligations under the 1954 Memorandum of Understanding signed in London, under which the Governments of the United States of America and of the United Kingdom of Great Britain and Northern Ireland, the primary administering Governments of the present-day Free Territory of Trieste, have sub-entrusted to the responsibility of the Italian Government the temporary civil administration of the FTT.

The border between Trieste and Italy was traces precisely by the British-US Government of the Free Territory of Trieste, the A.M.G. F.T.T. so by the first Government of State of Trieste, which has correctly exercised its administration in compliance with the 1947 Treaty of Peace (find out more HERE).

But this border is also subject to the international agreements in force on health-related matters, as in inter-State relations. And, of course, in accordance with the special procedures established by the World Health Organization in case of quarantine (a procedure applicable also to the international Free Port of Trieste, which is the only of its kind and is open, without discriminations, to the ships, vessels, and freight of all other States).

The border-crossing points to enter the Free Territory of Trieste are the one listed in 1951 with Order No. 179 of the A.M.G. F.T.T. amended in 1952 with Order 29 (which regards the Port), where they are called block posts. It is 12 block posts on the road, 3 on railways, and 6 maritime posts. Those on the border with Italy are at Duino and at S. Giovanni di Duino-Medeazza, to which it is important adding the tollgate at the exit of the A4 Trieste-Lisert highway.

The control point for railroads should take place in Monfalcone, the last Italian station before entry in the Free Territory of Trieste, while traffics by sea should be controlled in 6 places: Molo Bersaglieri, Molo Pescheria, Molo Aquilinia, Punto Franco Vecchio (Old Free Zone), Punto Franco Nuovo (New Free Zone), and the Muggia Harbour.

It is clear that those measures cannot be postponed, for they constitute the bases to legitimately and correctly administer the present-day Free Territory of Trieste. 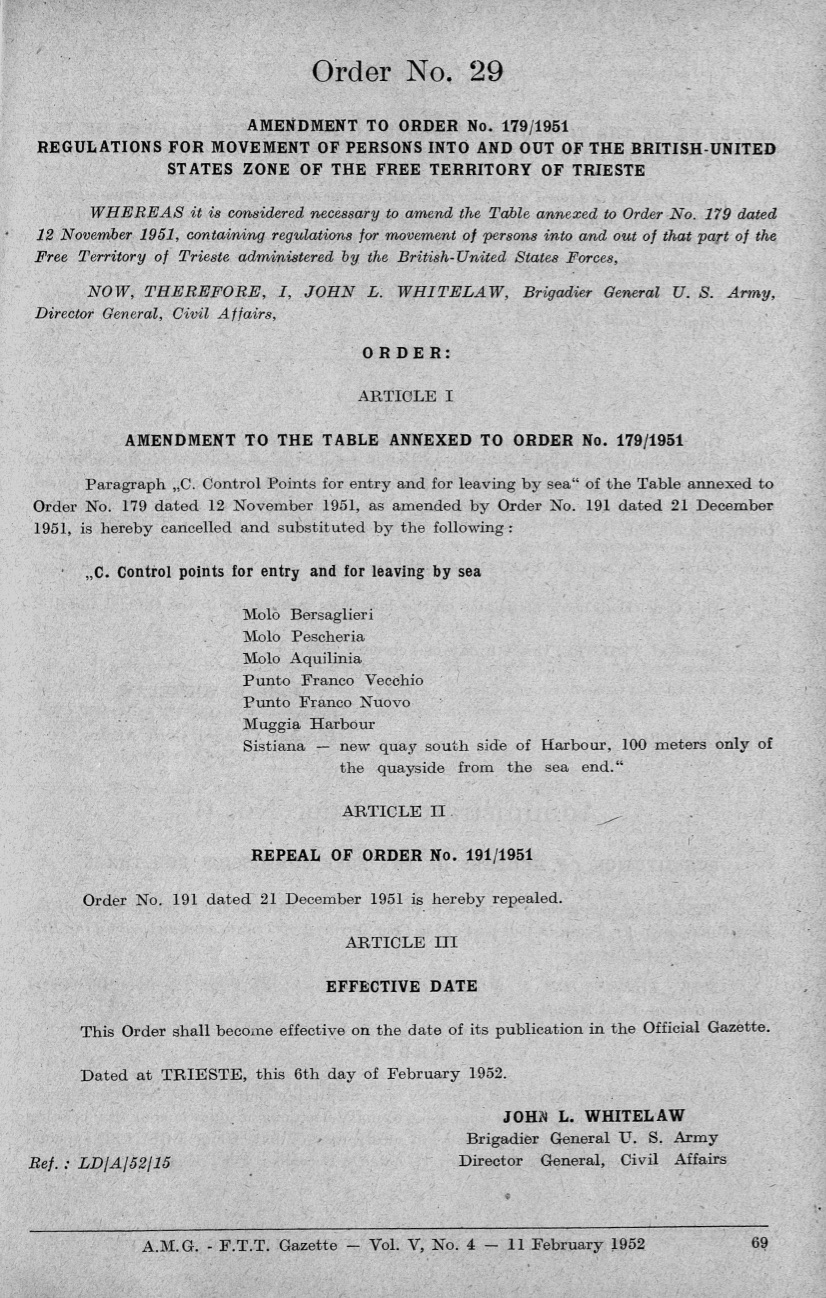