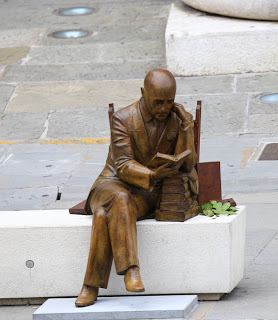 Statue of Gabriele D’Annunzio, placed in Piazza della Borsa by the Municipality of Trieste. The warrior-poet hailed by Italian nationalists is one of the precursors of Fascism and of the racial persecutions that hit Trieste. The provocative inauguration ceremony of this statue, on the 100th anniversary of the Impresa di Fiume (Venture of Fiume) resulted in Croatia’s official diplomatic protests.

Since 1918, Trieste has to suffer the cancellation of its identity, first due to the annexation to the Kingdom of Italy (1920-1943) and then, after the beginning of the Italian Government’s administration (1954) due to the nationalistic propagandas “of the border region”.

To Italy, Trieste was a foreign city to redeem, converting it to the “superior” Italian and then Fascist culture through an absolute subjection, enforced by the traditional means of a totalitarian regime.

Trieste, a city deeply connected to Mitteleuropa, multiethnic, multi-religious, and Most Faithful city of Austria, had to become the most Italian of all. So, during the first “forced Italianization” enforced between 1919 and 1943, the names and family names of Trieste’s inhabitants were changed, and so were the names of the places they were familiar with, including streets and squares, renamed to honour the “heroic” Italian liberators.

The Trieste mosque (LINK) was shut down, the ancient synagogues were destroyed (LINK) and speaking or teaching any language other than Italian was forbidden. The ethnic cleansing culminated in 1938, when Italy proclaimed its shameful, racial laws against the Jews: LINK

History was re-written by the winners and, ever since, generations of Triestines are indoctrinated with the false myths forged by Italian propaganda. It was an attempt to conceal, with a fake patriotism made of fake myths, the corruption of the misgovernment and the uncomfortable truths (LINK) of Italian politics and history. Just like the one of the heroic poet-warrior D’Annunzio, enemy and oppressor of Trieste: sure not a “liberator”.

The Municipality of Trieste, with further disregard for the true identity and history of Trieste, has now decided to dedicate a monument to the poet-warrior, no less than in Piazza della Borsa, the core of the city; it is a sculpture that depicts him with a book, open on a page titles “Trieste d’Italia, maggio 1917” (Italy’s Trieste, May 1917).

It is to remember the presence of D’Annunzio on the southern Isonzo front during the bloodshed May 1917, during the 10th Isonzo Battle, when the people of Trieste fought against the Italian aggressors, and against the poet himself.

The disaster of the Lupi di Toscana on the Timavo river

“May 26 saw minor skirmishes, but no attacks larger than battalion-sized, and by dawn of May 27 the fighting on the Carso had ebbed away. Both armies needed time to recuperate before entering battle again.

Even so, the embers of the 3rd Army’s offensive remained dangerously hot for the thousands of fantiin the front lines, and soldiers continued to die in futile attacks. One such was the failed May 26 assault of a battalion of the 45th Division across the narrow Timavo river on the Adriatic coast.

The battalion commander, Major Giovanni Randaccio, led his unit in a suicidal charge against the Austrian trenches on the river’s east bank. The plan of attack was devised by Randaccio and his assistant, the warrior-poet Gabriele D’Annunzio, who showed up on the Carso in time for the Tenth Battle and persuaded the major, his friend, to let him take part in the effort.

The attack called for the whole battalion to cross the river on a single gangplank and rush the Austrian trenches head-on, a corpse-producingscheme if there ever was one. When the battalion’s soldiers learned of the plan, they mutinied, shouting “We no longer want to be brought to the slaughterhouse”.

The reckless D’ Annunzio, outraged by the battalion’s rebellion, ordered the unit decimated. The survivors were then led over the gangplank into Austrian machine gun fire, with the disastrous result the fanti had foreseen. Although the initial assault took several Austrian positions, it succeeded at great cost, and was soon nullified by the inevitable Austrian counterattack. Hence the battalion’s assault gained nothing. Among the many Italian casualties was Major Randaccio, who fell mortally wounded while crossing the Timavo.”

“Giovanni Randaccio died an agonizing death in a Monfalcone field hospital, D’Annunzio at his side. The warrior-poet managed to turn his friend’s meaningless end into a gruesomely patriotic and romantic tale. The Duke of Aosta liked D’Annunzio’s speech so much that he had it reprinted and distributed to the men on the 3rd Army, to assist the ‘moral preparation of the combatants’.”

From book “Isonzo: The Forgotten Sacrifice of the Great War” by John R. Schindler