Administration does not mean sovereignty.

Laws in force in the Free Territory of Trieste

On 5 October 1954 the “Memorandum of Understanding regarding the Free Territory of Trieste” is signed.

Under the MoU, the primary administering Governments of the US and of the UK have sub-entrusted the temporary civil administration of the present-day Free Territory of Trieste to the Italian Government.

We wrote a lot about it on our “International Treaties” section, it’s worth paying it a visit: LINK

But let us return to the MoU: international law is only one side of Question Trieste.

Many sources claim that the Free Territory ceased to exist in 1954, or that the MoU gave Italy sovereignty over it. Apparently they have never read it carefully.

Let us take a look at domestic Italian laws. Did Italy extend its sovereignty over Trieste? Of course not.

What the Italian Government did is implementing the new special trusteeship mandate vested on it. How?

Let us read the first decree of the officer in charge of it: the Commissario Generale per il Territorio di Trieste, Mr. Giovanni Palamara:

Decree No. 1 – PROVISIONS REGARDING LAWS IN FORCE

In view of the Decree of the President of the Italian Republic issued on 27 October 1954, and in view of the authority vested on him:

The Commissioner General of the Government
Dr. GIOVANNI PALAMARA

This is a fundamental decree: the Free Territory of Trieste did not disappear in 1954, all. As Commissioner General Palamara confirms the standing of its individual corpus juris. Trieste maintains a legislation separate and independent from that of bordering Italy.

TRIESTE IS A STATE: THE FREE TERRITORY OF TRIESTE! 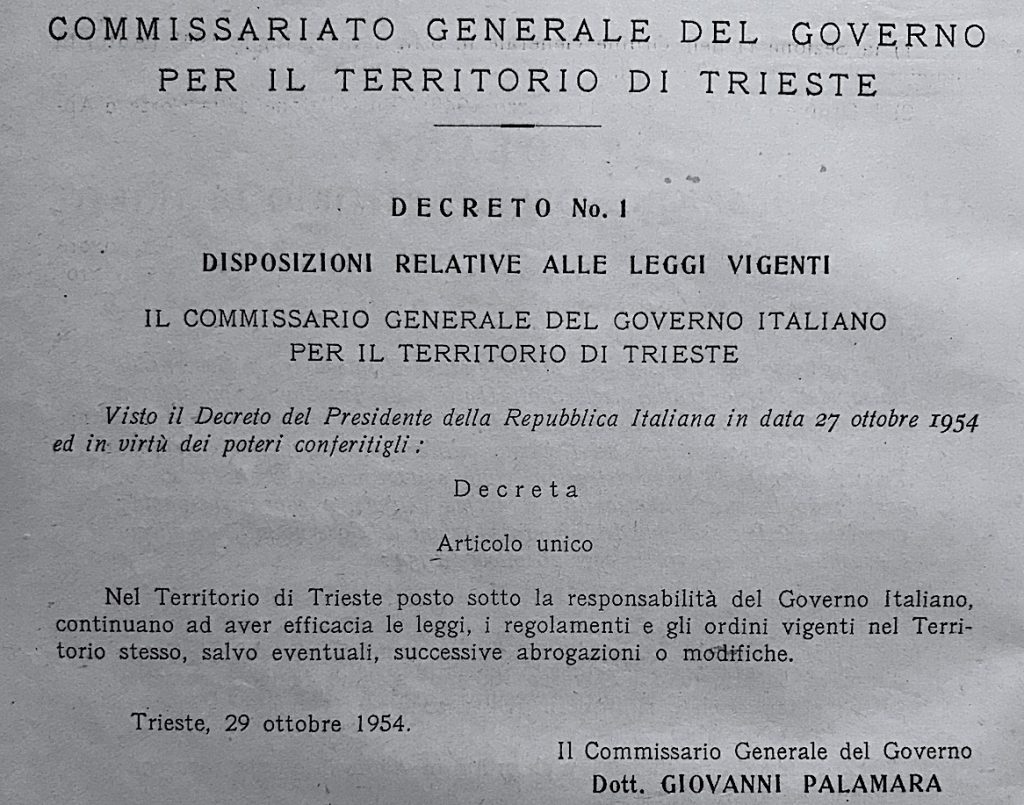