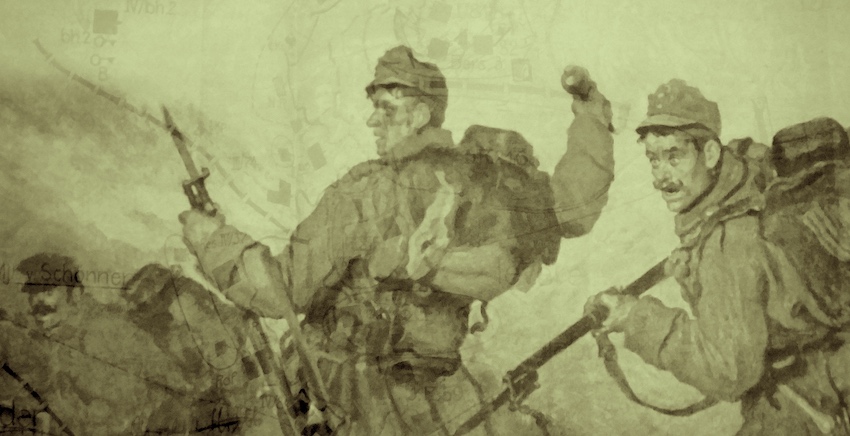 The 11th battle of the Isonzo is Cadorna’s last push on the southern Isonzofront before Caporetto. And it is the bloodiest all Great War battles on the southern front. The two sides lose a total of 280.000 men: it is carnage.

The goal of the Italian army is always the same: conquering Trieste circumventing the firm Austro-Hungarian defense. The attack comes from the north, with a march on the Bainsizza plateau (LINK), and from the south, with a news frontal attack against the Hermada.

Here, Italian troops attempt a last pounce to get back the positions they had occupied during the 10th battle of the Isonzo, when they had reached the Flondar. This means, only 2km away from Mt. Hermada. But the distance is a hell made of traps, chevaux de Frise, caves hiding machine guns, trenches build on many levels and with different depths. And, least but not last, there is the deadly artillery of the Hermada stronghold itself, which hits every inch of land in front of it.

The only way for the attack to have a slight chance of success is to destroy the Austro-Hungarian defense with a hammering artillery bombing. And so they do. The Italian artillery shakes the Hermada with uninterrupted bombings, to the point it looks like an erupting volcano. Austro-Hungarian troops await the inevitable attack of Italian infantrymen hidden in the shelters within the caves, but nevertheless they lose many men.

On 21 August, the divisions of the 3rd Italian Army attack: two Armies against three Austro-Hungarian divisions. The battle is harsh, often fought hand-to-hand. But the waves of the Italian infantrymen are once again massacred by the Austrian Schwarzlose and Mannlicher.

On the Flondar, the last surviving men of the 12th Austro-Hungarian division are saved from complete annihilation by the Czech infantrymen of the 9th division.

Another Austro-Hungarian division the had fought hard in the Flondar sector in the past three days was the 35th, Transylvanian, and the 63rd Regiment, mostly consisting of Rumanian soldiers, played a decisive role in stopping the Italian attack to the Hermada.

26-year old Franek, Viennese, was a well-trained, experienced officer. He was fighting since the beginning of the war with the 63rd Regiment, he had been wounded to the head twice, in Galizien and on the Carpathians, being awarded numerous decorations for his heroism. After a long convalescence, he and his division are reassigned to the southern Isonzofront. And, once again, Franek earns great glory.

On 21 August, Franek’s 17th Company is in the shelter-caves to shield itself from the Italians’ annihilation bombing. For three days, together with the whole 63rd I.R., the Rumanian infantrymen resisted the uninterrupted and heavy Italian attacks in the area between Altitude 146 and the Flondar, but in the end they had to draw back, suffering severe losses.

Now, on the fourth day of attacks, the companies of the 63rd I.R. are exhausted, the men isolated from one another, and they have no way to contact the heads of the regiment, or any superior officer. All they know, it is necessary standing to the last, awaiting reinforcements. Exploiting the bombing, the Italian infantrymen are drawing near the two caves that shelter part of Franek’s company: the Rumanians are trapped.

Franek, with one platoon, is in another cave-shelter that has not been reached yet by the outnumbering Italian troops: he reorganizes his men, and decides to attack the enemy. Not men, but ghosts come out of the bowels of the Karst: they are men who have fought without rest for four days, and, for four days, are suffering the hammering bombings of Italian artillery in their underground “dens”.

The walls and ceilings of the soldiers’ shelter-caves are hammered by the heavy Italian artillery. It seems they are about to fall, the men are afraid to be trapped under there in case the entrance of the cave is hit. Surviving in fear, awaiting a horrible death.

Until the artillery fire ends, which means, the Italian infantry is about to attack, follows the order to the riflemen, machine-gun fire, exploding hand-bombs and a battle-cry: “Savoia”. Finally, the Austro-Hungarian men can leave their coffins and fight with the sky up above their heads, finally human, although broken by the was: it is still a liberation, even if it means dying.

Franek and the only 30 men left by his side attack firmly the Italians, and overwhelm them. The Rumanians are unstoppable, and their “Hurra!” multiplies their number and strength, as they launch hand-grenades and fight with the bayonets. The Italians, despite being numerically superior, withdraw quickly, surprised by the powerful reaction of the Austro-Hungarians.

Franek won’t waste time, he attacks the Italian divisions that trapped the other men of this company in the two caves under Altitude 146 from behind. Once again, they fight with bayonets, daggers, shovels, hand-grenade: the counterattack is deadly for the Italians who, trapped between two fires, are forced to run away.

This is how Franek reunited his company, saving it from annihilation. Yet, he won’t stop. Taking advantage of the Italian fall in his sector, and to prevent them from reorganizing, continues his attack, gun in hand and leading his men, he frees other Austro-Hungarian divisions of the 63rd I.R. who were trapped in caves that otherwise would have become their graves.

At dawn, thanks to the powerful reaction of Oberleutnant Friedrich Franek, the whole Sektor Altitude 146 – Flondar is once again firm in the hands of the defending Austro-Hungarians.