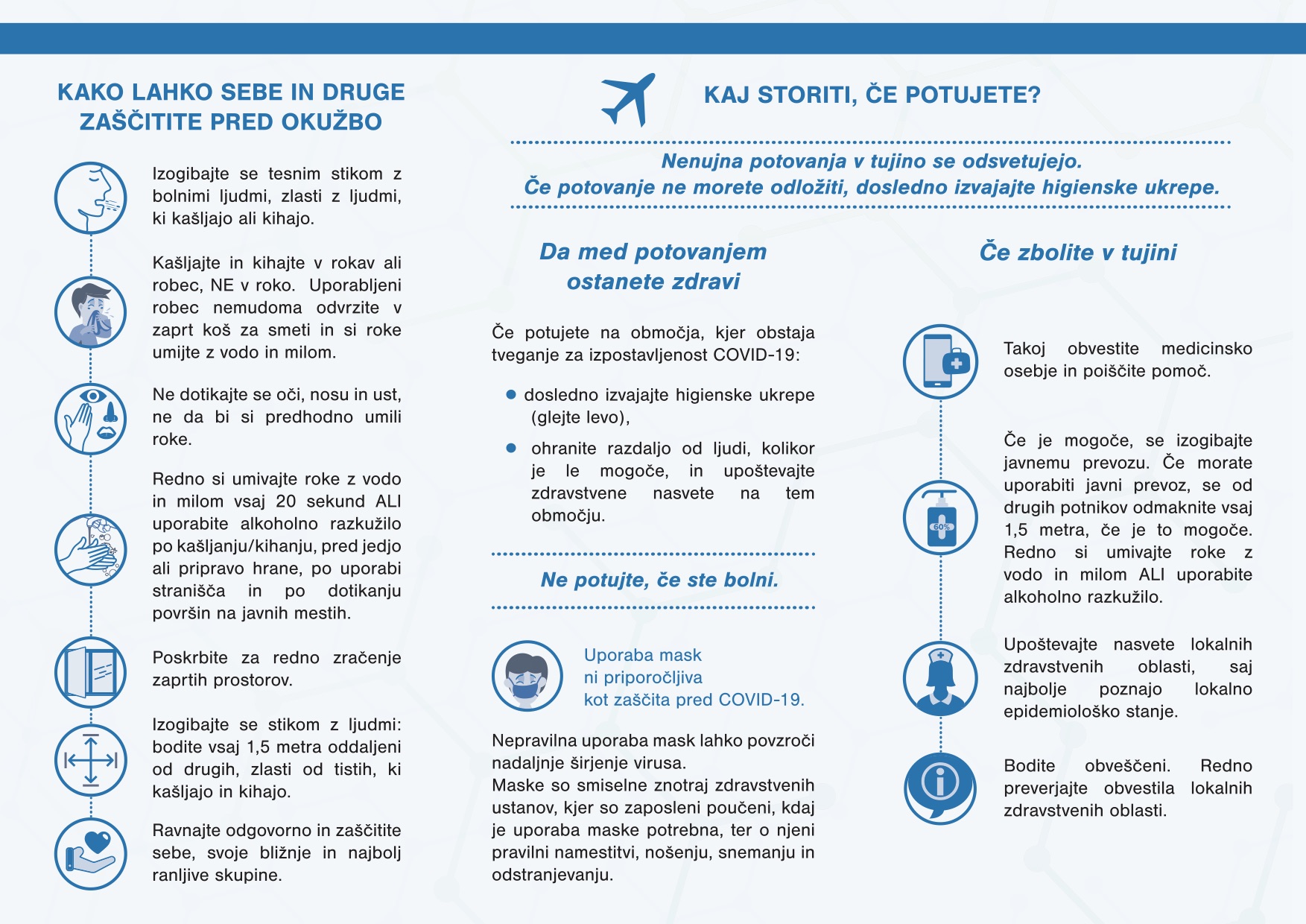 The brochure about the COVID-19 emergency (in Slovenian, but there is also an Italian version) received in the mail by all Slovenian citizens. This document is clear and essential, and it is also free to download from Slovenia’s institutional websites. This is a great example of public information on health matters provided during a serious crisis.

There is a standard procedure for all health emergencies. It is prevention, so preparation to face the emergency. For any serious health threat, from epidemics to radiological emergencies, to the emergencies in industrial plants, and natural disasters, there must be an emergency plant, and that must include prevention, a fundamental, mandatory element.

Without prevention, the consequences of an accident to industrial plants, nuclear plants, or of epidemics, earthquakes, a volcanic eruption, would be much worse. There would be more people contaminated, infected, poisoned by chemicals, hurt, affected by the catastrophe. Many more people would need medical care, and in the end more people would die.

That’s the point: prevention reduces the number of people affected, reducing the negative consequences of the emergency. This is why prevention is so important that it is included in all international, European, and domestic protocols on major hazards.

Prevention is the core of any serious emergency plan. Because prevention comes before the emergency, it is necessary to face them at best, reducing also panic among the people. Prevention is planning, it is serious organization: the very opposite of improvisation.

It is during prevention that the structures needed to face the emergency are established and built. For instance, that there are enough bed places in hospitals, that all Departments have the equipment they need to face a crisis (isolation rooms, intensive care beds, decontamination units). And also, that stocks of medicines and equipment to protect first responders and the people potentially exposed (face masks, gloves, protective suits) are enough for all of them.

And, as the emergency is declared, the State must inform all citizens about the correct behavior to take, and this cannot be deferred to the media or to official Government websites (not all citizens have access to the internet): the information must be mailed to each citizen. As did, for example, Slovenia, which faced the current coronavirus pandemic: not only the website of the National Institute of Public Health published the guidelines, it did also print and mail them to the citizens (see picture above).

If this is the needed premise to face any serious health hazard, then more than one factor did go wrong in the current Italian management of the Covid-19 pandemic. Because it seems that it was exactly this first step – prevention – to be missed, resulting in a whole Country trapped in a dramatic emergency that at this point resembles a long curfew, as business are gradually closed.

And, even three weeks after the beginning of the quarantine, the citizens are waiting to receive the needed face masks, which are impossible to find because, simply enough, there were not enough stocks.

How many citizens were aware that there is an emergency plant for pandemics? And who was supposed to provide this information? By law, it is the State, through the Government, that must inform the citizens about potential risks. And it must do it before the emergency is declared, after that it is too late. So what did go wrong? Because prevention is expensive, informing the citizens about potential risk and teaching them how to react is extensive… and so emergency plant remain on paper, in some drawer, and is the epidemic, accident, earthquake really happens, improvisation is all that is left.

Prompt information on international emergencies does certainly depend from the first Country hit by the crisis, in this case it is China: the earliest the information is shared, the earliest others are aware that it is time to activate proper defenses.

Delays in providing information be the first Country hit by the epidemic are ultimately going to affect all other Countries that are later affected as well. This is why, lacking an efficient, quick, and complete exchange of information on the international level, it is absolutely necessary that emergency plans are well established and can be immediately activated in case of need.

Unfortunately, on the international level, this goal is far from reached. And Italy, the European Country currently most affected by the epidemic, the enforcement of a serious policy to prevent serious hazards is still subject to delays.

An interesting case study, because it regards a problem that is certainly much better known, since 1945 and also for military reasons, is that of radiological emergencies. The accidents to the civilian nuclear power plants in Chernobyl and in Fukushima both had global consequences. International protocols in case of emergency are updated since 1986, resulting in a regulation that stresses prevention very much.

However, even when it comes to radiological emergencies, for instance, Italy has not enforced the framework legislation, the E.U. Directives that envision a mandatory information campaign on prevention of the risk and, due to this, Italy was deferred to the European Court of Justice by the E.U. Commission. It was 2006, and the reason was a complaint regarding the failure to prepare external emergency plants in case of an accident in the nearby nuclear power plant of Krško (Slovenia).

To better understand the failure of the Italian prevention mechanism, it is worth reading the dossier published by Greenaction Transnational on Italy’s failure to comply with the Euratom Directives (in Italian: LINK). It is still a relevant document, because it explains how the Italian administration is negatively affected by bureaucracy, how complex it is, and how ultimately ineffective it is, ending up preventing itself the enforcement of the laws on prevention of risks (this does also apply to the Seveso directive regarding industrial plants).

After the accident that occurred on 4 June 2008 at the Krško nuclear power plant, on 22 March 2020 a big earthquake has hit Zagreb: the epicenter was only 35 KM away from Europe’s most dangerous NPP. Well, it is 20 years that Italy fails to prepare emergency plants for radiological emergencies, both when it comes to the measures to enforce and to the information for the citizens, of both Italy and the present-day Free Territory of Trieste, the temporary civil administration of which is sub-entrusted to the Italian Government since 1954, resulting in it being bind to protect the people of the administered State through its own bodies and officers (LINK).

In the meantime, on 25 July 2019, Italy was once again deferred to the European Court of Justice for failing to comply with the newest Euratom directive (No. 2013/59) which establishes fundamental security protocols in case of exposure to ionizing radiation.

The emergency of the new Coronavirus proves once again that it is time for a mentality change. To tackle complex cases of emergency it is necessary to have a State that works perfectly in both its public and private sector. And it is necessary investing in prevention, teaching each citizen what they can do, starting from schools. Emergency plans must not remain in some drawer, they must be available to all citizens. And healthcare must be improved, not lose funds one year after another.

One last thought about the discussions in during this difficult time. Understandable, given the complex situation, the complains of citizens, who are tired after years of economic crisis: they risk to love all, because the heath crisis is causing also the collapse of their businesses. They are the powerless victims of an ineffective, corrupt State.

Less understandable, and in very poor taste, the complains of the Italian political establishment, because each of its members is responsible of the misgovernment that, in the past 40 years, has caused the under-evaluation of great risks and at the failure to comply with many provisions that defend the people (again, the case study of radiological emergencies says it all).

2 thoughts on “EMERGENCIES WITHOUT PREVENTION: FROM THE NEW CORONAVIRUS TO NUCLEAR RISK”