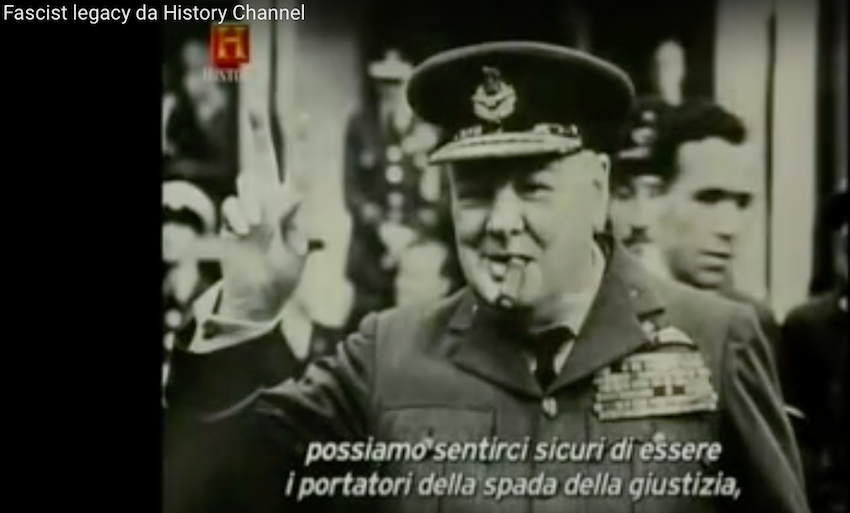 …we may feel sure that we bear the sword of justice…

They wore black shirts, and Winston Churchill was fond of them. Because they had the natural ruthlessness of colonialists. The one with which inferior people were subjugated, exterminated. And at the time the British Empire was the most powerful colonial power in Europe. The same colonial powers that, with their persecutions, had given raise to the greatest of democracies: the United States of America.

Those last wave colonialists that colonialist Winston Churchill “liked” were the Italian fascists who, along with the Nazis, granted the defence of Europe from the reading of hated Communism. Miscalculations of course, because once in power, the ferocious anti-communists and anti-Semites went out of control, and triggered a new World War (LINK).

A war that Nazi Germany fought until the very end, falling to the Allies. On the contrary, Italy surrendered as soon as things turned for the worse, siding with the winning side and betraying, once again, their German allies, the same way as it had done in 1915.

And this is why, after WWII, no Italian was criminal was put on trial. It was the reward for the new betrayal of Italy against Germany. This is Realpolitik, a philosophical concept of Bismarck’s, the Chancellor of German unification.

A cynical political philosophy, which translated in the annihilation of the rights of the individual in the name of the State and, essentially, the fuel of all injustices and devastation occurred in the XX Century to grant the superior, prevailing rights of States at the expenses of the rights of the people.

“The future victims were faced by the Carbineiri commander of the nearby town of Jelenje, Luigi Menaldo, who pulled out of his service back the papers, and started reading the names of the men that would die, as they were considered close relatives of the “rebellious bandits” and, therefore, had been sentenced to death. They were picked out, and five in a row.”

“… they came in the early morning, with tanks… they looted everything, sat ablaze everything… they took my husband, I asked where were they taking him… they said he would come back soon. But he has never returned. They would catch five, six men at a time… they slaughtered them, and then returned to take more.”

“All men were brought on this meadow… using flamethrowers, they sat fire to all that was behind us… the order was to shoot all men from 16 to 60 yeas of age… I survived because I looked younger than my 16 years… they placed the machine guns on the tanks, then they killed the men, one group after the other. They accidentally killed a boy of age 15. They killed a first group of 15 men, and the others had to bury them in a pit on the base of a hill before facing the same fate. It all happened in front of women and children. When it all ended, barely any of us was still alive”.

“We were defenceless, Italian soldiers and Carabinieri slaughtered us. You cannot imagine how it feels being there, at the executions… you are there and can do nothing… you are forced to watch, to see horrible things. When I became a Partisan, a rifle in hand, I would say: now I have an arm, nobody can do a thing to me… I was confident in myself. But there… being there and unable to do a thing while they were slaughtering my people was terrible.”

“The Italians believed that, by terror, they would have broken the Resistance of the Yugoslavs, but they were wrong, the greater the oppression, the strongest the resistance.”

The whole village was burned down, and the surviving inhabitants were imprisoned in Italian concentration camps, where 49 more people died, including 12 children.

“The massacre of Podhum is only one of hundred of war crimes committed by Italian occupants in Yugoslavia remaining, unfortunately, unpunished.”

Podhum, monument to the victims of the 17 July 1942 killing 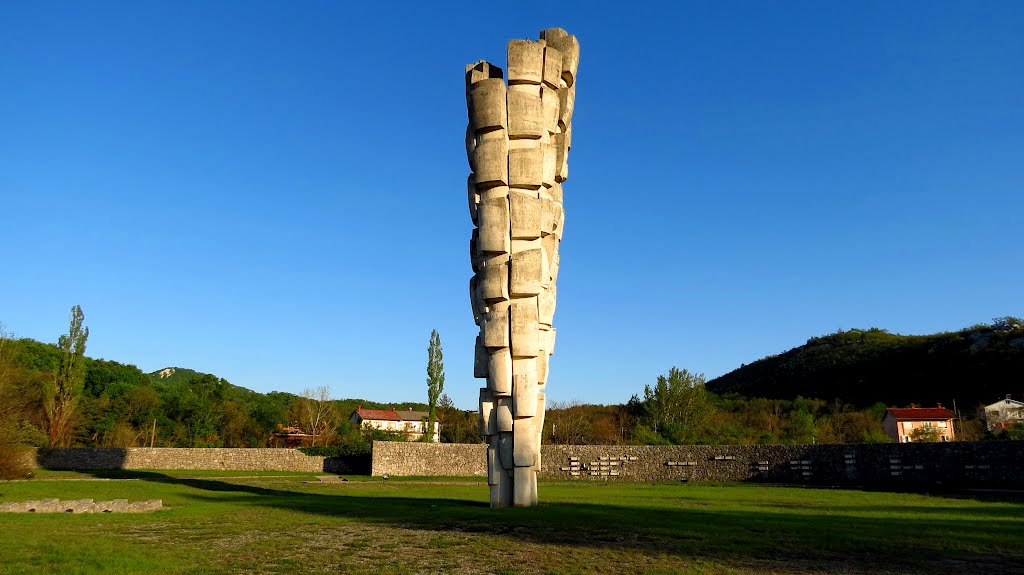