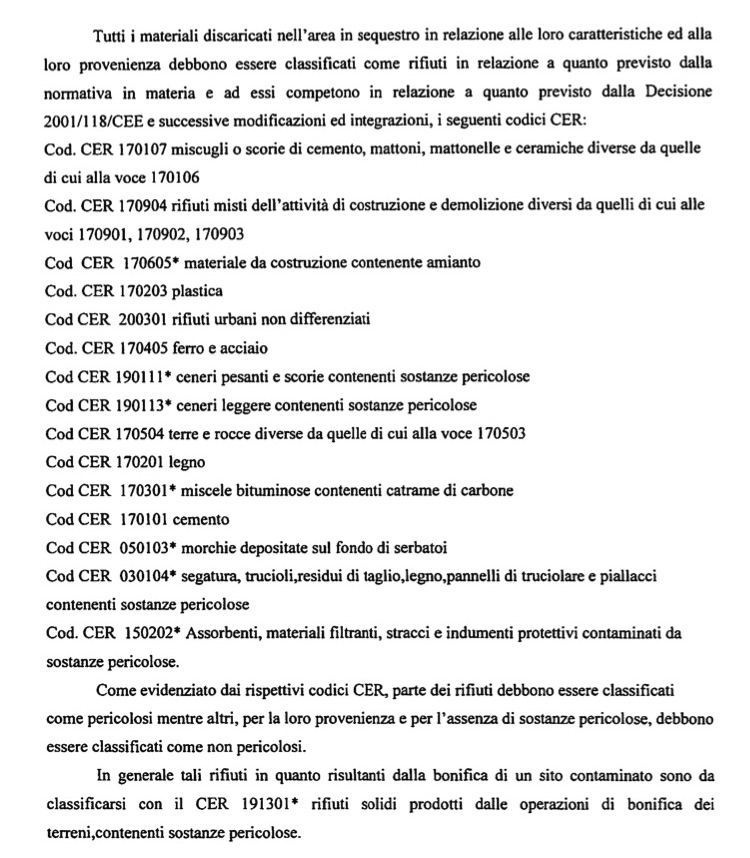 The waste found in the Barcola embankment (assessment of the experts appointed by the Prosecution Office of the Republic in Trieste).

THE EMBANKMENT OF BARCOLA: A DIOXIN LANDFILL IN A SEASIDE RESORT.

The local public administrators, and the Italian Government itself, are always trying to avoid discussing the unresolved problem of pollution in Trieste, so in the present-day Free Territory of Trieste and in its international Free Port. It is one of the major problems for Trieste and for its citizens. It is a problem that affects the quality of life, with negative effects on the environment, public health, and economic development. The pollution that has always been concealed is in facts an environmental disaster, caused by the authorities and the mafias, together.

A lot has already been done to fight back pollution: my battles in defense of the environment and of public health are documented both in my investigative book “Tracks of Legality – how Italian corruptions and mafias pollute the Free Territory of Trieste” and on my blog, “Ambiente e Legalità” (translated here as “Environment and Legality”), for example, there is my complaint before European authorities, leading to the construction of a new sewage plant, or the joint stand with Alpe Adria Green to save the Gulf of Trieste from the LNG terminalproject promoted by Gas Natural and very much supported by local politicians – and even Italian ones.

Yet, there is still a lot to do: for example, I wrote about it in the series of posts that tell the story “Behind the dumping grounds of the Free Territory of Trieste” where I introduce the questionand explain the problem of the Ferriera di Servola (steelworks), but also the role of the mediaand the liabilities of the authorities, and the severe pollution of the Noghere Valley.

How many landfills were made in the Free Territory of Trieste since 1945, so since the beginning of the sub-administration of the Italian Government? What is disposed there, and what about the “special” waste, the one managed by the institutionalized eco-mafias, the one hidden in the Trieste landfills during the past 60 years? What are the consequences of this much pollution?

To answer the first question, I think it is enough recalling the map of the main polluted sites within the Free Territory of Trieste (including the Port) published in mu book “Tracce di legalità”. They are 20 macro-areas that include different kinds of pollution (for example, one of the macro-areas includes more than 150 polluted caves of Trieste’s Karst Plateau). 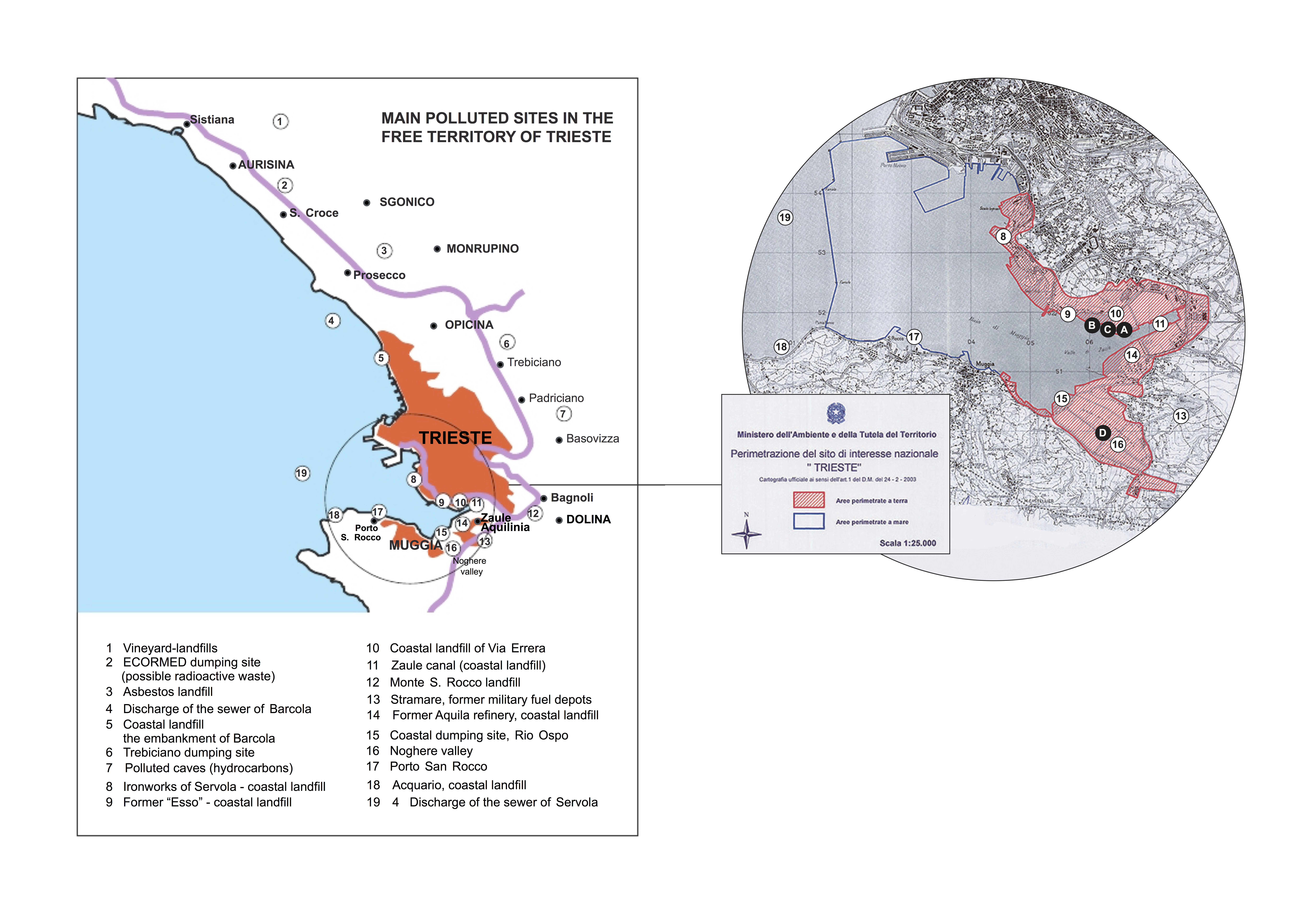 To answer the second question, I rely on the wide documentation preserved in the archives of Greenaction Transnational, assembled through years of investigations about waste and pollution. One of the most useful and interesting documents regarding the content of a “typical” landfill of System Trieste is the documentation regarding the embankment of Barcola.

This wide landfall by the sea, within a seaside resort, has been investigated by both Italian authorities and the European Commission, so it is one of the most analyzed when it coms to our Territory.

So, what is in the Barcola embankment’s bowels? Here is a list (the area covers about 90,000mq and it contains more than 300,000 cubic meters of waste) of what was identified so far:

It is important noticing that the embankment of Barcola, like other landfills by the sea or on the Karst Plateau were used also to dispose the ashes and slag from the incineration plants of various Italian regions (see post: The silence on the mafia’s waste in Trieste).

To answer the third question, I’d like to directly report an abstract from an expert study written by the technical advisors appointed by the Prosecution Office of the Republic in Trieste during the 2005 investigations (which lead to the seizure of the area):

“The analyses conduced so far, as written before, demonstrate that the area under seizure contains levels of contaminated material above the limits set under Italian Ministerial Decree – D.M. 471/99 regarding areas to be reclaimed, indeed, the levels of metals, of Polychlorinated biphenyl, of Polycyclic aromatic hydrocarbon (PAHs), and of hydrocarbons are far above the legal limits established under Italian Ministerial Decree D.M. 471/99 as the limit to assess the contamination of soils…

This result does therefore constitute further evidence that the waste dumped in the embankment consisted in pollutants that are unsuitable for embanking the sea, and are harmful for the environment. The dumping of hazardous materials did therefore lead to an environment that used to be healthy and uncontaminated, destined to activities that require high quality standards as are bathing and mussel farming or leisure activities, was in facts not only contaminated, but outright destroyed.

Since this contaminating material was dumped without using any sealing or barrier to prevent it from coming into contact with the environment, in particular with the seawaterin front of it and above it, with time, that material was – and is going to be – washed away by rainwater, by percolating water, and by tidal water, ending up in the sea.

The possibility of this event is clear upon analyzing the data obtained by the lixiviation of the samples, in order to assess the occurring of this phenomenon that leads to the leaking of pollution from the materials embanked, ultimately destined to reach the sea in front of them.

The fact that incineration slag is indeed a material that leaks pollution was indeed common knowledge at the time of the embanking of the Barcola area, as proved by the 1981 investigation of the Trieste Prophylaxis and Hygienes Lab –Laboratorio di Igiene e Profilassi”.

The consequences of this situation on the health of the citizens who are exposed to hazard waste (the exact chemical and physical characteristics of which are unknown, as they are all labeled as generic “dangerous substances”) were never assessed. All that is sure is that the landfill-embankment of Barcola is in the main seaside resort of Trieste, and this means that, every year, dozens of thousand of unaware people are exposed to this severe pollution made of dioxins, hydrocarbons, heavy metals, asbestos, and other waste labeled as “dangerous substances”.

And, unfortunately, also due to the lack of serious epidemiological investigations, there is another unfortunate fact: due to severe environmental pollution, Trieste is one of the most affected places in Europe when it comes to the incidence of cancers.