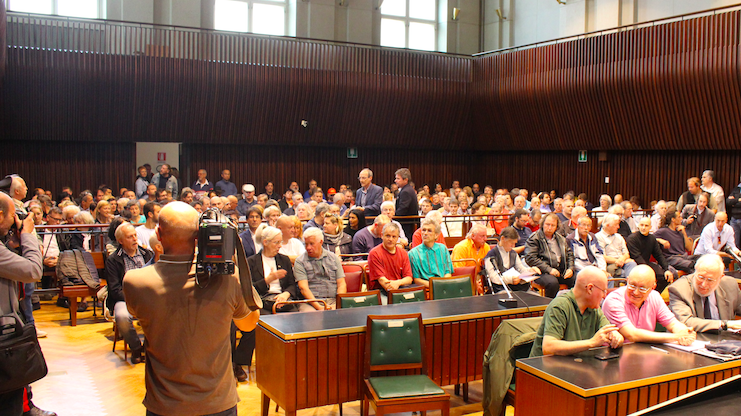 The Court of Assizes of Trieste during the second, crowded hearing (15 May 2018) of the civil lawsuit for determination on taxation in the Free Territory of Trieste.

On 29 September [2018], judge Anna Fanelli lodged her decision in the civil legal action for determination regarding taxation promoted by the I.P.R. F.T.T. and supported by no less than 600 other appellants. It is a judgment set to make waves.

Because the judge of the Italian Republic serving in Trieste declared to be incompetent to decide in a lawsuit in which the appellants requested no less than compliance with the Italian laws in force, which do implement and enforce the provisions of the 1947 Treaty of Peace with Italy and of the 1954 Memorandum of Understanding of London, which are both international legal instruments in force.

How else can we interpret the claims of judge Anna Fanelli who, to “break free” from such a difficult lawsuit, claims:

“Indeed, the nature of the requests brought before Court makes it difficult conceiving an admissible, concrete and legally possible power of intervention of the Court addressed”.

But who else should secure the rule of justice enforcing the law, it not the judge who must be above all political influences, and subject only to the law?

In her paradoxical decision, judge Anna Fanelli goes as far as claiming that it is unclear why the Free Territory of Trieste’s citizens seek not to pay Italy’s taxes:

“Now, it appears hard identifying a specific right of the F.T.T. and or citizens or supporters of the same to be relieved from the taxes of the Italian State, rather than a right of the F.T.T. itself, if possible when it comes to the matter, to have certain acts and actions with which Public Authorities exercise their potestas on the matter to be carried out in accordance with the law of the State, and possibly also with international law”.

But enforcing the law in accordance with the domestic and international legal order is no less that the request brought before Court.

This is what sovereignty is all about, Ms. judge, that principle under which citizens of a State shall pay taxes to their own State, not to another one, that attempts to substitute there own in breach of both international law and its own, domestic legal order.

And there is no doubt that the Law, thus international law and the domestic legislation of the Italian Republic, establishes no less than this for Trieste and for its Free Port. It is the law that you, Ms. judge, should respect and make respect. Because it is also the law of your own State, the Italian Republic that, by deciding to take no decision, you have essentially failed to apply.

Because a judge who does not apply the law abandons the citizens and enterprises of Trieste and of other States to the mercy of politicians who trample on legality, shielded by no less than the absence of magistrates willing to enforce it, as happened here, or by the presence of other magistrates who mystify the law, as seen in the past.

But the judges failing to enforce the law are those the Italian Republic has sent in Trieste to administer justice as part of the exercise of the temporary civil administration of the Free Territory that is entrusted to the Italian Government by the Governments of the United States and of the United Kingdom as primary administering Governments on behalf of the U.N. Security Council.

This means, when Italian judges serving their duties in Trieste fail to enforce or outright breach laws regarding the rights of the administered Free Territory, of its citizens, or of its enterprises, they are damaging also the credibility, the domestic, and the international interests of the Italian Government itself as of the Italian Republic.

And the denial of justice cemented in this elusive judge paves the way to not just the obvious, immediate appeal before the Court of second instance, but also to the activation of all superior instances of justice, especially on the international level.

This judgment is most certainly remaining in history; it won’t remain unnoticed, because it triggers an avalanche of consequences, domestically and internationally.

Is it possible remaining silence as the present-day Free Territory of Trieste, the State with the only international Free Port in the world, is relinquished to a provisional administration that forces citizens, local enterprises, and even international investors to live a situation of absolute legal uncertainty?

And is it tolerable that the same administration that denies justice to the people is sub-entrusted with the exercises of the trusteeship mandate of the Allied and Associated Powers that established the Free Territory of Trieste and its international Free Port with the Italian Peace Treaty?