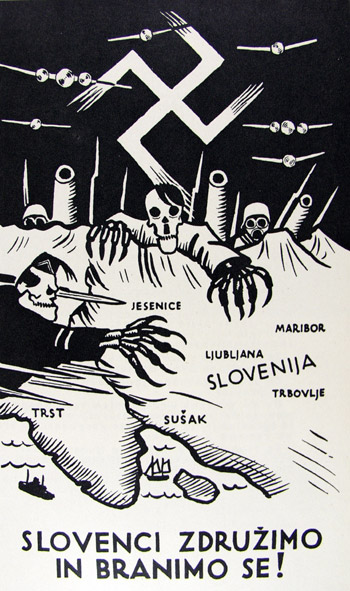 The history of the past century has lead to the end of Mitteleuropa, swept away by rising nationalisms resulting in two World Wars, even better, to a long war that lasted thirty years (1914-1945). The second Thirty Years’ War, the most cruel, because in its last phase, during the Second World War (1939-1945), as humanity degenerated to its lowest, the ridge of racial hatred ended with genocide.

Trieste was overwhelmed by this madness that turned men in bloodthirsty beasts. Trieste, paragon of centuries of the multi-ethnic coexistence of the people of the Austrian-Hungarian Empire, after being annexed by Italy (1920) was catapulted in appalling nationalisms, in which it sinks once again since 1954, this time as Italy’s “last colony” (LINK). Once the greatest port of Mitteleuropa as well as melting pot and source of stability for the Balkan States that identified with the House of Habsbourg, after 1920 it became the gateway for Italy’s expansionism at the expenses of the “hated” southern Slavs many regarded as an “inferior race”.

Even Nazi Germany was dragged on the Balkan Front in 1940 to support Mussolini, Hitler’s friend, to fulfill the greatness the Fascist dictator dreamt: bringing Italy back to the glory of the ancient Roman Empire. But, in order to call the the Mediterranean “mare nostrum” again, he needed the fundamental help of those who, 2,000 years before, were the hated, feared Germanic barbarians.

Italy could only obtain fulfill its ambition relying Nazi Germany since, without its powerful ally, it could not even defeat the little, weak Greece it had treacherously attacked.

Also, since Italy’s sphere of influence was on the South, it did not interfere with Hitler’s plans, as he envisioned Germany holding power over the whole Central-Eastern Europe. It was an unholy, blood-stained dream deriving from an “imperfect” union between Hitler’s Nazis, sons of the doctrine of the superiority of the Arian race, and the fascists, sons of the theory of the supremacy of Rome’s bloodline: an union born from the crazy revolutions of racial hatred.

In other words, the union of two folks that suffered the racist revolution that resulted from the collapse of the Central Empires, a miscalculation of the Triple Entente (United Kingdom, France, USA) and ultimate degeneration of nationalisms in Europe.

Italy, which had been used in WWI to destroy the Austrian-Hungarian Empire, was itself a victim of greater powers: a pawn, used by France and the United Kingdom in their game against the Central Empires. A State considered useful as long as it would fight Germany and Austria but after the war, once it was brought back to its role of regional power, tried to rebel to its fate and go back to being a world “Power”.

And Italy did it by allying to Hitler’s post-war Germany, which as rising again. This means, betraying its new allies to side with old enemies. Old enemies, which were also the former allies it had betrayed in World War I. Only to betray the “newly found” former allies (Germany) again once World War II turned sour.

On the other side, these treacherous Italians did not defeat in combat the proud Slavs they regarded as inferior (going as far as to surround the city of Ljubljana with barbed wire, turning it into a concentration camp: LINK) and this is why they massacred them with the needed help of the Germanic allies instead.

However, contrarily to Germany and to Japan, Italy never had to respond for its war crimes. And this is why, to date, Italians believe they played a fundamental role in World War I, won it reuniting a “fatherland” that, in facts, had never existed, and were the “victims” of the Allies Powers in World War II, to the point they claim to have saved themselves from Fascism.

Long story short, Italy claims to have always fought right wars to either free “oppressed folks” or to save itself from oppressors. Under this light, Fascism is a mere consequence of foreign interventions aiming at damaging the new State established with the wars of he Risorgimento. Furthermore, Italy had already been “betrayed” by its new allies after WWI, because they did not second its expansionism at the expenses of the new Kingdom of Yugoslavia. It is the infamous “vittoria mutilata” (Mutilated victory) as they always teach it in Italian schools.

Unfortunately, this portrayal is a falsification of history, consolidated by the school curriculums that have shaped generations of post-WWII Italians. Who are themselves victims of Fascist-like propaganda, masked with the laws of the new Repubblic.

The very same Republic that proclaimed 10 February, the anniversary of the coming into force of the Treaty of Peace that ended WWII and proclaimed Trieste independent (LINK) a day of national mourning under the name of “Giorno del Ricordo” (which translates as “Remembrance Day” for no other reason than resembling that of the International Shoah Remembrance Day, which in Italian is called Giornata della Memoria) to make it seem it was Italy to be unfairly persecuted by the victorious Powers of WWII.

In truth, it was Italy to cause the war siding with Germany and attacking Countries it regarded as “weak” and thus “easy” to conquer – like Libya, Ethiopia, Albania, Greece, Yugoslavia – or Countries that had already been defeated by others – like France (despite it being the Country that had offered Italy the most support in the establishment of the national State) all of this, of course, without forgetting to betray its own allies (from the “Guerre d’Indipendenza” of the Risorgimento to the World Wars). And let us not forget Italy’s persecution and racial laws against the Jews. It is not honor, but betrayal to constitute the foundation of Italy’s existence: it is a hidden truth that Italians prefer to keep ignoring.