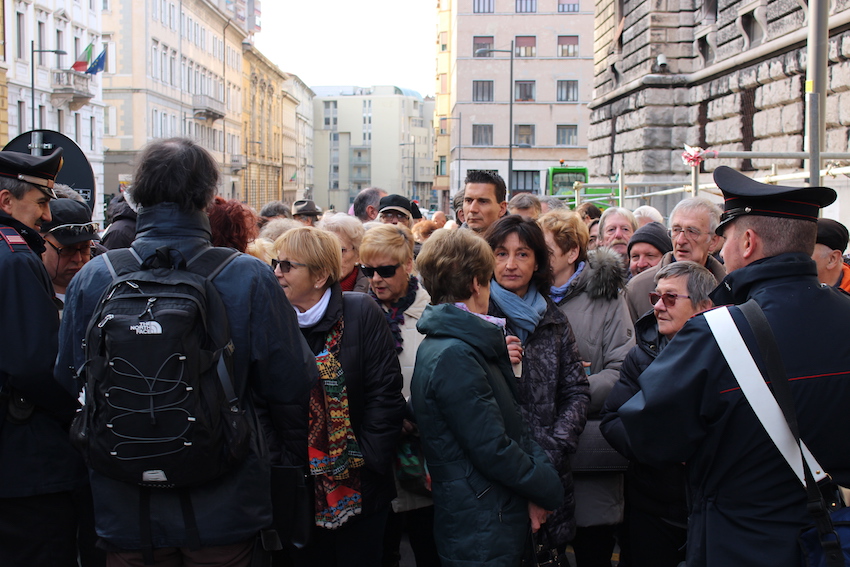 Tuesday, November 2017: the supporters of the fiscal lawsuit promoted by the I.P.R. F.T.T. are in line to enter the Courthouse of Trieste and partecipate to the first hearing (the only media to publish the news were online newspapers “La Voce di Trieste” and “Il Corriere di Trieste“).

“Nature – for thus does any current or stream the line of least resistance, finding a way past an obstacle and then flowing on, while the back eddies wash away the now isolated object”.

On November 28th, before the Court of Trieste, took place the first hearing of the awaited civil lawsuit of verification on taxation, promoted by the I.P.R. F.T.T. (International Provisional Representative of the Free Territory of Trieste) versus the Italian Government, which is entrusted with the temporary civil administration of the present-day Free Territory of Trieste – FTT.

Hundreds of citizens and enterprises (also from other Countries, which have economic rights over the Free Territory and its international Free Port, an unicum in the world) have already joined the legal action, as well as delegating the I.P.R. F.T.T. to represent them in this important legal dispute to decide the future of the economy of Trieste and of its citizens.

Because if the requests of the I.P.R. F.T.T. and of the citizens are accepted, the whole fiscal regime of Trieste and of its Port changes: no more Italian taxes, and legal certainty as for the right to manage its Free Zones, which can also be extended outside the Free Port.

This is what the 1947 Treaty of Peace rules for the Free Territory of Trieste, and it is exactly what the Italian administration has denied to Trieste until now. So, instead of becoming the European Singapore, Trieste and its territory were treated like the marginalized, downgraded periphery of an highly corrupted Country, which means Italy.

This awakening of the citizens of the Free Territory of Trieste is not coincidental, nor sudden, rather, it is the logical conclusion of years of legal battles that now culminate in the decisive action to re-establish the correct, separate management of taxation in the FTT. The citizens of Trieste want to pay the taxes of their own State, which are not the huge taxes of the Italian Republic, but those, twice to trice lower, of the Free Territory of Trieste.

This is the fiscal liberation the people are asking for: contributing to the welter of their State instead of seeing their money swallowed in the bottomless pit that is the Italian public debt.

No fiscal “riot”, no “rebellion”, instead, the enforcement of the law by the force of law alone: here, this is that happened on Tuesday, November 28th, in this epoch-marching, first hearing before the Court of the Free Territory of Trieste: a truly masterful lesson of democracy through law.