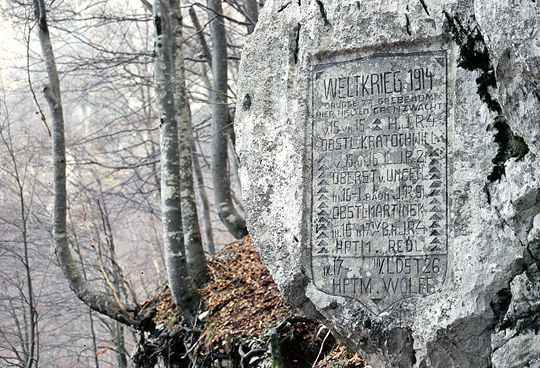 On the 100th anniversary of the 12th battle of the Isonzo, historiography highlighted very much the relevant role of the German troops, called to support the Austrian-Hungarian allies, in the breach of Caporetto.

And it certainly cannot be denied that the presence of 7 elite German division, well equipped and trained, proved very important for the final outcome of a carefully planned attack.

It was legendary Erwin Rommel to become the symbol of this victory, at the time he was a young lieutenant decorated with the most prestigious Prussian order of merit, the Pour le Mérite, for conquering Mount Matajur, which represented one of the main bastions of Italian defense line in the central part of the Isonzo.

But the other Caporetto, that of Austrian-Hungarians, who contributed equally to their German allies to the success, is often forgotten.

The eight Austrian-Hungarian divisions within the 14th Army fought bravely and, often, the Imperial-Royal troops moved ahead the Germans to the point that the decisive action of that attack, the crossing of river Tagliamento and the establishment of the first bridgehead in Cornino, happened thanks to the valorous Bosnians of the 4th Regiment from Bosnia-Herzegovina: the “Bosniaken” of Captain Emil Redl were faster than the Bavarian Alpenkorps of Lieutenant Erwin Rommel.

And it was right thanks to the heroic action of the Bosnian troops, those who never stopped, and always remained behind the retreating enemy, overcoming tiredness and hunger, supported by the enthusiasm of victory, that the Italian army could never build a new defense line behind the Tagliamento again, and had to retreat back to river Piave.

Captain Redl was decorated with the Knight’s Cross of the Maria Theresia Order for the exceptional action of his 4th battalion of the 14th Army which, after four day of battles, successfully crossed river Tagliamento becoming the first bridgehead that overwhelmed the second Italian defense line behind river Isonzo. Emperor Karl himself wanted to congratulate Redl saying: “You gave new drive to our attack”.

The fighting spirit and the loyalty of those legendary troops, among the most decorated of the Imperial-Royal Army, is well described in the witness of under-lieutenant Hans Fritz, who commanded a platoon in a Bosniak battalion, about the time he was wounded during the 8th battle of the Isonzo: «My head hurt, and in my mouth I felt a disgusting flavor. Blood! I raised my hand and felt my face, it was covered in blood, and my head was covered with gauze. It was drizzling with rain. Outside it was much more calm, only the isolated blasts of a small caliber Shrapnel whose impudent bullets were hitting stones. On one as on the other side it was quiet, the calm of an ending battle. “Thanks be to Allah, he is alive! Momci (boys), he is alive!”. The unwashed, mated face of sergeant Piljević was on me. Now I could see them, my loyal boys, they were all around me. Jozo moistened my lips with the last water in his dented drinking bottle. Franjo did carefully put his lice ridden coat under my head. Suddenly I felt safe, and filled with gratitude I received their loyalty. Later on, two slightly wounded Bosniaks took me with them, and took me back. I turned once again. They were all here, and their gaze was on us, and Piljević, his fist clenched, pointed to the sky, shouted: “Look, Momci, they nearly killed our under-lieutenant! Damn it, they’ll pay for this!”, and a resounds Serbo-Croatian curse enforced this oath of loyalty.» (I Bosniaci sul fronte italiano 1915-1918 – The Bosniaks on the Italian Front 1915-1918, Werner Scachinger).

The rough Bosniak mountain men: the best fighters in the Imperial-Royal Austrian-Hungarian army. Trieste owes a lot to the valorous Bosniaks who, with the 4th regiment, were the garrison of the first Port of the Empire, and defended it from Italian attacks from 1915 to 1917, fighting also on the Karst front. As testified also by the many Austrian-Hungarian military cemeteries that, often forgotten, constellate our territory.