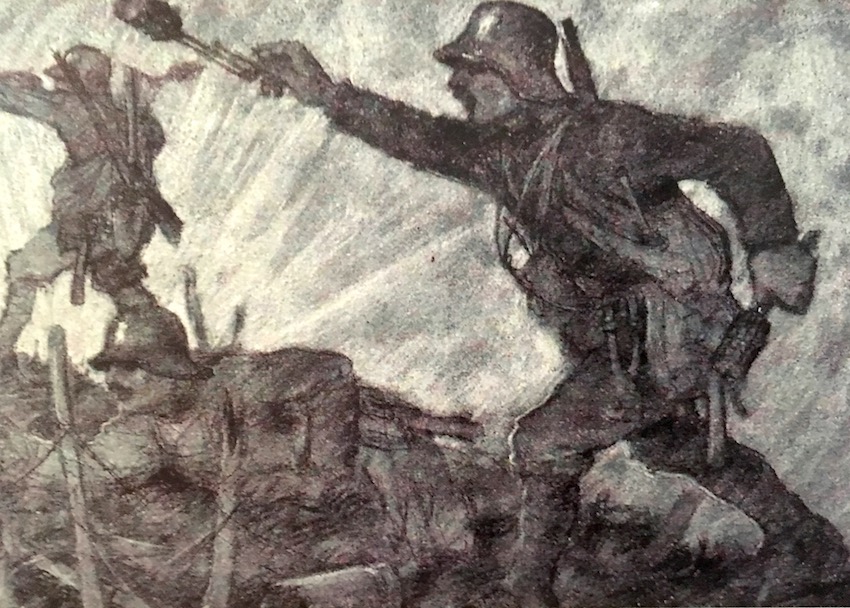 THE LIBERATION OF TRIESTE FROM THE ITALIAN ASSAULT

“Men do not count more than machines, but instead, that the better machine controlled by a better man – the commander – can discount the blue of ‘big battalions’. Weapons and training count far more than mere numbers”.

It is the centennial of the breaking of Caporetto-Kobarid. This certainly is one of the most famous battles of the First World War. It is such a relevant episode of the war to become, especially in Italy, a synonym of defeat, fall, and fleeing from the enemy as the very State falls apart. This is a deceptive interpretation of what truly happened one hundred years ago there, at the foot of those Julian Alps considered impenetrable, and therefore safe.

Because that is also a confrontation between different societies and cultures: the Germanic Austro-Hungarian on one side, the Mediterranean-Italian on the other. Mitteleuropa and Prussia against the young Italian State born from the bloody race to national unification forced by the Savoia in the name of the interests of other States.

And entering World War I should be the crowning of this forced unity, which meant the dissolution of kingdoms in order to create a monarchic State with colonialist aims born from the imitation of the word aspects of the by then decaying expansionist policies of the main European powers, a last “independence” war against the enemy of centuries: Austria-Hungary.

But Italy, who attacked Austria and declared war to it on May 23td, 1915, was a former ally, now sided with the Entente (United Kingdom, France, Russia) after disowning the alliance with Germany and with Austria in order to gain the maximum territorial compensation at the expenses of its to former allies.

The decision to enter the war in the hour of maximum weakness of Austria, exhausted after ten months of hard struggles on the eastern front, where Russian troops broke through occupying Galicia – Galizien and reaching the borders of Hungary, confirmed the infamy of a betrayal that, from that moment, would be forever upon Italy. A reflection of the Italian policy aiming at cynical opportunism, in spite of any agreement and of the very principle of loyalty and that, on the other side, would repeat itself also during the Second World War.

On the terrestrial front with Italy, Austria-Hungary’s defense line extended for about 600 km from the Alps to the Adriatic sea, and it took advantage of the characteristics of the filed, as well as resisting to the continuing attacks of the Italian army, no less than 11 in two year and a half, especially on the front of the Isonzo. The capture of Gorizia and of part of the Bainsizza plateau were the only outcomes of battles that dud cost Italy hundreds of thousand of casualties. Instead, the main goals of those attacks remained far out of reach: Trieste, first port of the Empire, and Laibach – Ljubljana.

However, even the defenders, who had to face the attacks of enemies much superior in number and in means, suffered many casualties: each battle on the Isonzofront would devour 50,000 to 100,000 men. Losses very hard to restore, considering the lacks of forces of an army forced to fight on three fronts (Eastern Europe, the Balkans, Italy), and the effects of the naval block forced on the Central Powers, which became more and more unbearable.

Trieste had suffered very much the first two years and a half of the war with Italy, being practically under siege, and the front got closer and closer, one battle after another: in summer 1917 the front run near the fortified lines of mountain Hermada, just 20 km from the city. Two years and a half of bombings, carried out by both planes and ships, which had already caused dozens of victims, together with the naval block, had brought what used to be one of the greatest ports in Europe on its knees.

Trieste had lost about 100,000 from the beginning of the war and in 1917 its enemies lived in fear of the then very likely final Italian attack that could lead to the occupation of the city. The firm defense of Boroevic’s defense of the Isonzo Armee stopped also the last and most ferocious of Italian attacks, the 11th battle that broke on the walls of the Hermada defense line.

However, this time the 5th Austro-Hungarian army had almost collapsed: therefore, it was necessary sending the traitorous enemy back to its initial positions, behind the Isonzo, to allow the reconsolidating of the Imperial and Royal Army in view of a new attack on the southern front to be delivered in spring 1918, also thanks to Russia’s retreat.

It was necessary taking time. At the same time, the German allies would do the same on the western front: 1918 would be the decisive year. And so it was, even if the plans of the Central Powers had not taken the United State’s decision to join the war into account, and that proved decisive on the main front, that with France.

However, to hit Italy hard, Austro-Hungarian forces alone were not enough, thus Emperor Karl’s request to his German ally to provide him German divisions for a join attack.

In September, when the 11th Battle of the Isonzo had not ended yet, the Deputy Chief of Staff to the German Second Army, Ludendorff, consenting to the requests of Austria, entrusted Generalleutnant Otto von Below to prepare a relief offensive on the central front of the Isonzo, offering 7 German divisions. Of course it was well-trained, special troops, including also mountain troops like the famous Bavarian Alpenkorps where served then young lieutenant Erwin Rommel.

The arangement of the attack was entrusted to General Krafft von Dellmensingen who, after careful inspections of the Isonzofront, established that the best place for the breakthrough was the Tolmino-Caporetto sector, which was perfect for the strategy.

This is how the 14th Austrian-German army, consisting in 15 divisions (7 German ones, 8 Austro-Hungarians) was established. It consisted in picked troops and trained to fight on the mountains: next to the German Alpenkorps, were deployed the Bosnian regiments, the Kaiserjäger, and the Schützen. Military elites for a specialistic attack like the one in preparation.

On the morning of 24 October1917, after a brief bombing focose on the main defense points, Austrian-German troops attacked, overwhelming Italian defense lines and occupied Caporetto advancing for Km during the first day of battle alone.

The breakthrough allowed to move round the Italian defenses cutting the connection between the 2nd and the 3rd Italian Army. For their decisive breakthrough, the Austrian-German troops used the well experimented strategy they had used a few months before fighting on the Karst plateau: siding the Sturmtruppen, assault squads made of few, but well-trained men, with portable machine guns, who would create a leverage in enemy lines, spreading panic.

At the end of the first day, the battle was essentially won. Austrian-German troops did then spread in the flats, surrounding the strongholds still defended by the Italians, on the mountains, which would fall in the following days. The order of general retreat (while the divisions were already escaping) was launched by Generalissimo Cadorna as early as on October 28th: first they retreated on the Tagliamento and, after the Bosnians of the 55th Austro-Hungarian division had crossed it building the first bridgehead, on November the 2nd, backed to the Piave.

The retreat did soon turn into an escape and the whole 2nd Italian Army ceased to exist as a fighting body. At least 400,000 men were taken prisoner in the hardest defeat ever suffered by the Italian army. However, the outcome of this attack surprised its very offenders, who could not exploit to the maximum what could have been the deadly blow to get Italy out of the war.

Indeed, the forces destined to this attack were too limited to advance more than 20-30 km. Later, the extension of supply lines as well as the weakness of communication lines made it difficult granting supplies to the advancing troops, who ended up lacking food and ammunition.

Caporetto could have been a total victory if Italian retreat were cut before reaching river Tagliamento, which exhausted Italian troops could use to reach their defense lines near the Piave and to re-organize themselves. But, of course, such a manoeuvre to surround and cut the retreat of the Italian would have taken ten more divisions held back as reserves: but there were no such divisions.

Another cause of the impossibility to take full advantage of the Italian fall that must now be under evaluated (except for the disputes between German and Austrian-Hungarian commanders about who should have the “honour” to cut the retreat of the Italians, which ultimately was not cut) is the condition of the troops involved in the attack: soldiers often on the edge of starvation, who aimed primarily at the food of the enemy (this dependent on the lack of primary resources and food caused by the suffocating naval block of the Entente against the Central Powers).

According to Liddel Hart: “The well—filled supply depots of the Italian army were too great of a temptation to the under-nourished enemy, the desire to eat quenched the desire to pursue, and sudden congestion of the stomach accelerated the congestion of the advance. It is significant that even a German division commander, General Lecquis, could exult more at the capture of two r three chickens apiece by his men than of many prisoners, as regarded the possession of few pigs ‘as the height of human felicity’.”

And this situation would repeat itself even more clearly after the battle of the Piave, the last assault of the Double Monarchy, in June 1918.