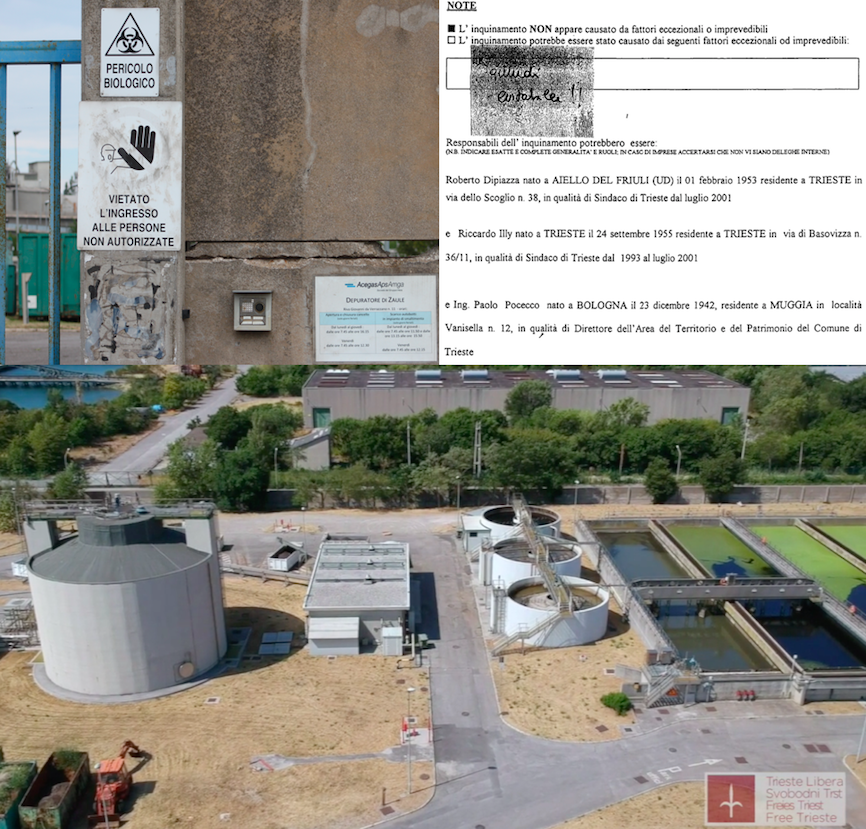 “Scholar Jörg Ott, an eminent Scientist of international fame and tenured Professor of Marine Biology of the University of Vienna, involved in long-time studies of the North Adriatic Sea, questioned the sewage treatment plant of Servola as early as it entered into service, considering it ineffective and dangerous, since underwater discharge at such depth and that far away from the shore does not allow the biodegradation of organic remains, resulting in the destruction the seabed”.

(The dangerousness of the Servola sewage treatment plant – STP for the whole Gulf of Trieste according to professor Jörg Ott – from book Tracks of Legality – how Italian mafias and corruptions pollute the Free Territory of Trieste: LINK).

This story is about dirty business. A fraud at the expenses of public health and of the environment. A fraud that was hidden in the name of superior interests of State. It is the story of the management of waste in Trieste since about 50 years. Or, to be more precise, since the Italian Government was entrusted with the responsibility to administer this territory. Because Trieste, with its international Free Port, after WWII became an independent State, which must be administered under a specific provisional regime until the full implementation of its Permanent Statute.

So it is a provisional administration the one entrusted by the Governments of the United States and of the United Kingdom to the Italian Government: a special trusteeship mandate over a third State, the Free Territory of Trieste, and of course this mandate should be carried out in the interest of our State. But things went very differently: instead, the administered present-day Free Territory of Trieste is treated as a colony to exploit, in particular since its outright annexation would constitute a breach of the 1947 Treaty of Peace and of the very Italian laws (LINK).

Since 1954, Trieste is almost a lawless land, where all possible illegal operations consolidated. And the management of waste is part of this picture. Waste disposed by local public administration in association with the Italian Mafia which, hiding behind the anachronistic and ferocious Italian nationalism of the border area, turned the temporary civil administration in an illegal simulation of the sovereignty of the Italian State.

In Trieste, this (dirty) turnover developed for decades and also in relation to this uncontrolled system of disposal of waste. Also, a certainly important part of this business took care of the management of sewage treatment, which is a rewarding sector. The control of the local, nationalistic Camorra over the Trieste STPs lead to building new sub-standarded plants, affected by huge flaws and inadequate designs, including the lack of whole sectors needed to treat black waters, resulting in the dump of non-purified sewage in the sea: technically it was still “sewage sludge”. Filtered through unsuitable STPs which, on the other side, coasted dozens of millions of Euro.

The solution? Continuing, expensive, and useless maintenance and updates as long as the STPs were active, and when it was not enough, they were rebuilt (like with the new Servola STP, after a complaint to the European Authority, certainly not out of the good heart of the local authorities: LINK). Rather than waste waters, those STPs absorbed a great flow of public cash, and dumped it into the pockets of those who, in the past decades, managed this remunerative business worth at least EUR 200 millions.

How about liabilities? There is none, despite the malfunctioning of those STPs causing what is no less than an international environmental disaster in the narrow Gulf of Trieste shared by four States (Italy, the Free Territory, Slovenia, and Croatia). But no liabilities does not mean no liable people, only, those responsible for it were never found or committed for trial, because any investigation of the judiciary that would affect this extended illegal system of disposal of waste lead to no results.

And it is exactly thanks to this “impunity” granted by the authority that this corrupted system of power could consolidate itself in the Free Territory of Trieste harming its economy and its environment. The environmental, sanitary, and social price of this serious pollution was therefore placed on the shoulders of the citizens. The reconstruction of the main STP of Trieste alone, the one of Servola, costs about EUR 52.5 millions. And this burden should also include the very serious damages caused to the ecosystem of Northern Adriatic, damaged by this pollution disguised as an efficient network of industrial and civil waste water purification system.

In the reports sent to the Prosecution Office of the Republic by the ARPA (Agenzia Regionale Protezione Ambiente – Regional Agency for Environmental Protection, see image above), the names of the people who are primarily responsible for this pollution are written clearly: among them, Riccardo Illy and Roberto Dipiazza, the two Mayors of Trieste in office from 1993 to 2001. But, as mentioned, in the end, the silence of investigations dropped in the name of the State covered this investigation: no liability for public administrators, everything (pollution, expenditure on the maintenance and reconstruction of the STPs and damages – considering also the EU’s infringement proceedings) were (once again) put on the shoulders of unaware citizens.

To the point that, currently, the leader of the Council of the Municipality of Trieste is no less than Roberto Dipiazza, one of those investigated in the case of Trieste’s “ghost” STPs. A warranty on the continuity of power needed to prevent the liabilities of a system of power that lives in the shadow of Italian mafias from being exposed.

But the citizens of the Free Territory of Trieste can no longer accept to suffer this misgovernanment in silence: if reclaiming polluted territories is an obligation, punishing those responsible of its contamination is a duty. One day, in the Courts of the Free Territory of Trieste there won’t be prescription for those who committed crimes against the environment and, therefore, against humanity.