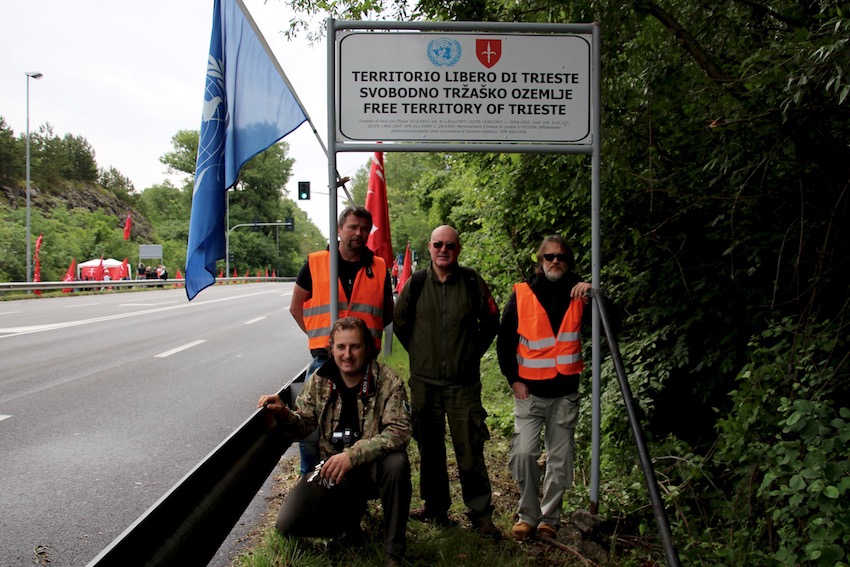 CLEARED FROM THE CHARGES OF PUBLIC PROSECUTOR FREZZA: THE FACT DOES NOT CONSTITUTE A CRIME

On Wednesday, September 20th, at 6.30 PM ended with an acquittal the trial “of the signs” initiated by the Italian State Police against me for refusing to remove the temporary border signs placed at the border crossing of the Free Territory of Trieste with Italy during the demonstrations of the Free Trieste Movement: the fact does not constitute a crime.

The episode refers to the time between March and May. The Free Trieste Movement, after requesting the Commissioner of the Government to restore the correct road signs to mark the borders of State of the Free Territory of Trieste, launched a campaign to raise awareness on this subject holding demonstration on the border with Italy, at San Giovanni di Duino – Štivan and Medeazza – Medja Vas.

During the demonstrations the signs were displayed, marking the border of State. It is signs alike to those used before by the first British-US administering Government between 1947 and 1954, and then completely omitted by the new Italian Government, sub-entrusted with the temporary civil administration of the present-day Free Territory of Trieste.

The Police that attended the demonstrations had soon started to question the presence of the signs with pretentious excuses, the truth was, they were really bothered by those signs. According to them, they constituted a breach of the traffic code. The real reason was another one: it was inconvenient that someone else was raising this much attention on a situation that is that delicate and compromising for the administering Italian authorities. Because the duty to ensure respect of the borders falls on the Italian Government.

The explanations given to the police were vain: they had to take action, making the unwanted signs disappear. Orders from above, apparently. Maybe nice advice from the very Prefect and Commissioner of the Government, who barely stands this revolution of legality that is exposing her misconducts, for which she has already been reported by Free Trieste: LINK.

So, we did often have to face with the fortitude of legality to the arrogance and aggressiveness of those who were abusing of their powers in breach of the very laws they had to enforce.

But we never surrendered. And when the police removed the signs, and seized them, we placed new ones, with no fear. And we did even request them be returned to us, and we received them back: LINK.

Then it was time for criminal complaint, resulting in a decreto penale (criminal decree of conviction, a preliminary measure without a trial) that I impugned, therefore being committed for trial.

And this is how we ended up before Court. A Court before which witnessed also Annapaola Porzio, the Commissioner of the Government, no less. Her declarations were shy, revealing a representative of the administering Italian Government that simply wants to escape her responsibilities.

Instead, I had no reason to be shy: I did state once again the legitimacy of all of my actions. So I was tried by the prosecution and explained that during our demonstrations we do nothing more than exercising our rights of citizens of the Free Territory of Trieste, defending legality itself.

At the end, it was the very prosecution to request my acquittal: there is “no case to answer”. Because refusing to obey to an illegitimate order cannot be considered a crime.