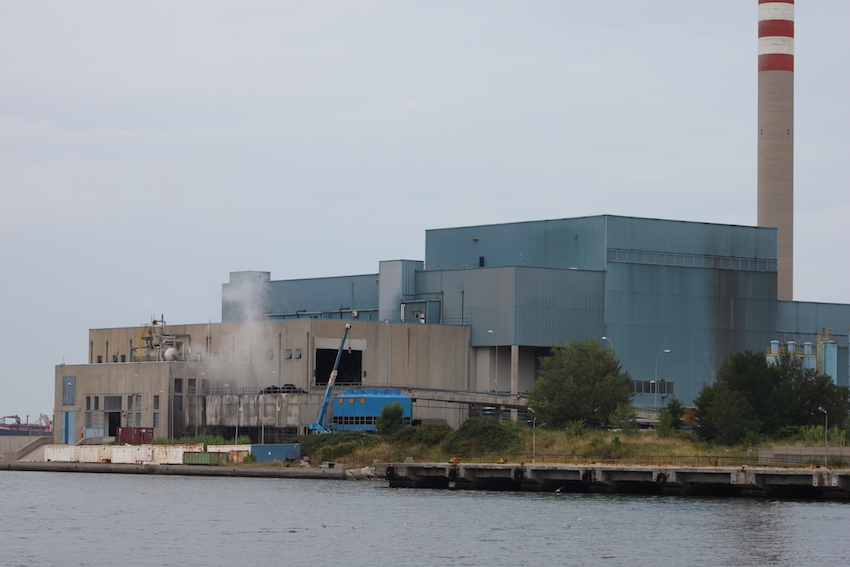 ONE CUBIC KILOMETER OF GASSEOUS POLLUTANTS PER YEAR, 80,000 TONNAGES OF BOTTOMAND FLY ASHES ENDING UP IN LANDFILLS: THE PRICE OF THE DISPOSAL OF ITALIAN WASTE IN THE INCINERAION PLANT OF TRIESTE.

Whenever we are told that incineration plants are the best way to dispose waste, we’d better open our eyes and gather some information. The truth is, incineration plant are highly pollutant facilities, which do not solve the issue of pollution, actually, they amplify it. The truth is, such plants are only good to fuel economic trades at the expenses of the environment and of public health.

An incineration plant makes it possible reducing by 10% to 20% the volume of initial waste, and to reduce its weight by 30 to 50. Waste cannot be destroyed, therefore it returns in the environment under the shape of much more toxic waste. Each tonnage of waste disposed produced 5.000-6.000 m3 of gas that must be filtered with electric filters or filters made with artificial tissues (which, however, don’t last long).

However, only part of the ashes, coarse dust, is trapped by the filters. The finest dust are released in the atmosphere by the chimney of the incineration plant, falling in a range of dozens of kilometers. The clouds of gas released in the atmosphere contain acids (Hydrochloric acid, hydrofluoric acid, sulphur dioxide), nitrogen oxides, heavy metals (lead, cadmium, chromium, nickel, mercury, zinc), halogenated hydrocarbon (dioxins and furans).

It is a deadly mixture of pollutants that is released in the atmosphere and falls on the ground polluting all terrestrial and maritime environments. And then the very slag of the incineration, the final and most hazardous product, representing about 50% of the entering waste, must be disposed in special landfills hundreds of kilometers away from the incineration plant (because nobody wants to have such hazardous waste in their territory). It is expensive landfills, that must be controlled and abandoned after a certain time of use. And the land, contaminated with dioxin, must be remediated.

The incineration plant of Trieste produces about 1 cubic billion of cubic meters of gaseous pollutants that are released in the atmosphere, as well as about 50.000 to 80.000 tonnages of slag, which is disposed in special waste disposal sites. One cubic kilometer of gaseous pollutants from the incineration plant weights on Trieste’s atmosphere. Howeverm in nature, nothing is created nor destroyed: but everything is transformed. And when it comes to the burnt-incinerated waste, the transformation is very negative, because the final product is much more poisonous than the initial one.

In ten years, the incineration plant of Trieste produced about 10 cubic billion of cubic meters of gaseous pollutants. And it produced about 500.000 to 800.000 tonnages of ashes (slag), that was thrown in landfills. Waste cannot be cancelled: but it can be transformed, creating new, much more deadly pollution.

The incineration plant of Trieste, the only facility of this kind in the Free Territory Trieste, is used to dispose Italian waste: 60% of the waste incinerated here is from Italy. And the effects of this pollution that damages very seriously the health of the citizens of Trieste and to those of the bordering littoral of Slovenia, adding their effects to the very serious effects of environmental pollution that Italy has dumped in Trieste before. The very incineration plant is built on one of the landfills that were used, between 1970 and 1990, to dump without security measures, right into the sea, creating a maritime landfill, the ashes produced by Italian landfills, like the one in Lecce (S.A.S.P.I.).

Unfortunately, Trieste continues being conquered land for the Italian mafias of waste thanks to its corrupted administering authorities.

Some useful videos (in Italian) about pollution caused by fine particles and their effects on human health: