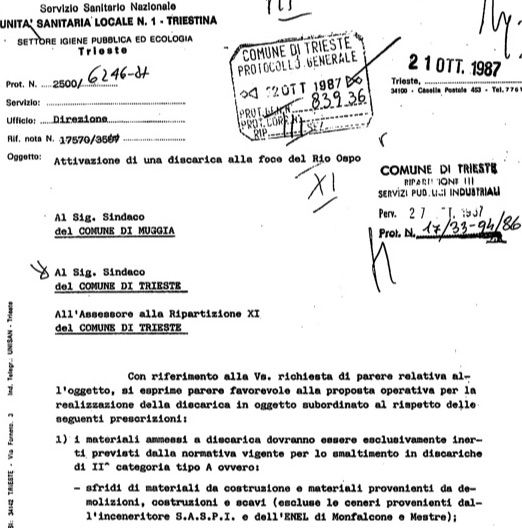 The denial of the Local Health Service of Trieste to dumping the incinerator slag from outside Trieste in the final part of the Noghere landfill (Muggia).  The ashes from Apulia and Veneto were disposed regardless to that in the middle of the bathing site of Barcola, and on the Karst.

One of the most common things that happen when questioning public authorities about the state of pollution in the Free Territory of Trieste is their embarrassed silence followed by answers that usually under evaluate the actual problem.

The embarrassment of the authorities is easy to understand: it is not easy hiding a dramatic truth made of illegal landfills that cover about 30-50% of the surface of this little European State (212 Km2) entrusted to the Italian Government under temporary administration since 5 October 1954.

It is a disastrous administration protected, right thanks to the connivance of local authorities, by a simulation of the re-establishment of the former Italian sovereignty that is as illegal as it is harmful, for the purpose of allowing the Free Territory of Trieste and its international Free Port are used by this local “nationalistic Camorra” and by other, similar Italian criminal organization for their own business, including, indeed, the most illegal types.

Which includes the illegal disposal of waste: it was easy making disappear in Trieste and in its territory (as documented in this investigation by Greenaction Transnational: LINK) things that would not be accepted even in the Italian regions under the most strict control of organized crime.

For decades, Trieste and its Free Port were the junction of those traffics under suspect of connections with the Mafias: hazardous waste, special waste, and even military waste, from South to North of the nearby Italian Republic, were sorted in the Free Port of Trieste, and were often disposed in the huge maritime landfills built with constant embanking (even in bathing sites), and then in the high landfills of the Noghere and of Zaule, up to the Karst highlands, where caves and dolinas were used for the same purpose. We are talking about a devastating environmental disaster, which I have denounced in my investigative book “Tracks of Legaly – how Italian mafias and corruption pollute the Free Territory of Trieste” (presentation of the book, in Italian: LINK). But, of course, according to those liable for this disaster, the less one talks about it, the better.

In the huge landfills of Trieste, the scars of this use as foreign dumping site of State are well evident: the massive dioxin contamination, for example, is the symptom of the disposal of ashes from waste incineration plants. Ashes that were not just from the only incineration plant of the city, but also from Italy.

In 1987, during the authorization process for the extension of the Noghere landfill near Muggia, the Local Health Service explained that, considering their level of toxicity, the ashes from the S.A.S.P.I. incineration plant of Lecce (Apulia) and from the ENEL thermoelectric power plants in Monfalcone (near Gorizia) and Mestre (Veneto) could not be disposed there.

Both thermoelectric power plants were considered sources of lots of pollution due to both emissions and slag, while the Lecce incineration plant S.A.S.P.I. was not only a serious cause of pollution, but had a very shady management, and it was suspected that it was involved with the Mafia. Did it end like this?

Obviously not: those dangerous plant could dispose their production waste freely and without controls anyways (we are talking about ashes and heavy oil) in other landfills, “kindly” provided by the Italian public authorities in the Free Territory of Trieste.

Dozens of thousand tonnages of the worst industrial waste from all three plants were dumped in the embankment of Barcola, in the landfill of Via Errera, under the Noghere valley, in other coastal landfills obtained by embanking the sea in the port of Trieste, but also in the landfills for inert materials obtained filling many dolinas of Trieste’s Karst.

The harmfulness of the former incineration plant S.A.S.P.I. and the environmental damages the plant has caused in Apulia was stated once again in a recent address to the Italian Parliament presented by the Movimento 5 Stelle, which requests the remediation of the contaminated land.

Curious enough, in Trieste, the city sacrificed to Italian pollution of State, all political parties, including the Movimento 5 Stelle, prefer forgetting to request an assessment of the environmental damage caused by the illegal disposal of waste brought here also by the former S.A.S.P.I. incineration plant of Lecce. Maybe they think the citizens of Trieste have less rights because they are regarded as citizens of an Italian “colony”.

And, for instance, thanks to those administrators who lend themselves to the simulation of Italian sovereignty in exchange of impunity and protection for their own business, Trieste continues to receive, to date, waste that comes from the Italian regions that are under the most strict control of the Mafias.

Recently, the Free Trieste Movement has requested urgent clarifications to local public administrations to inform the citizens about the quality of the waste that is burnt in the only local incineration plant, and information about their regions of origin. But no answer was received yet/

The very Commission for the Environment of the Municipality of Trieste, which with its investigative and inspective powers, should investigate about the environmental disaster unleashed on the present-day Free Territory of Trieste stays absolutely silence. The majority of its members (8 out of 15) is not from Trieste, and the Chairman is from Apulia.

This pact of silence reminds us, once again, that the era of mafias in Trieste has not ended yet. 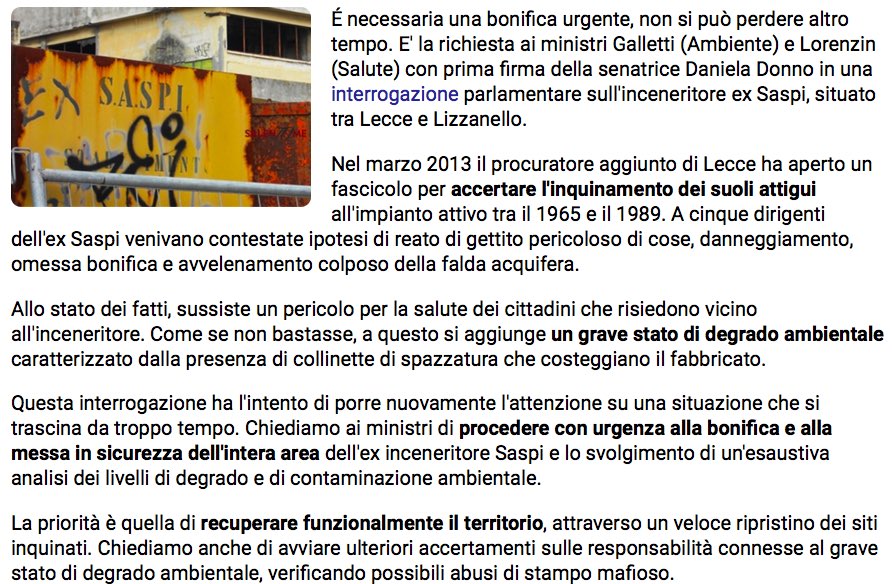