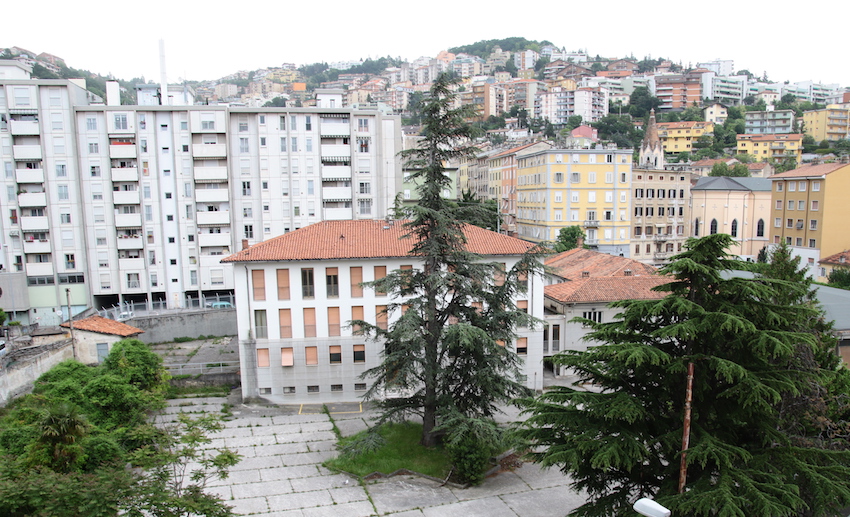 Former station of the Traffic Police in Roiano: this is one of the public assets of the Free Territory of Trieste.

They want to force the underselling of all public properties of the Free Territory of Trieste, making it seem like they belong to the Italian State. This, in short, is the operation that goes on since a long time in Trieste, and in the past months it has became faster. After the attempted and failed (although they don’t admit it) attempt to remove from property of State part of the Free Port of Trieste (they call it the Old Port, while the correct name would be Northern Free Port) they try to do the same whenever they can.

And so, projects ant proposals to (under)sell public properties worth billions of Euro follow one another. And the wannabe “real estate agents” this time are the State Property Office of the Italian State on one side, which either simulates or goes as far as claiming to be the legitimate owner of all public assets in Trieste, and the other side, the Municipality of Trieste itself, which, being occupied by Italian authorities (the Mayor and the whole City Council are imposed with the administrative elections of the bordering State, namely the Italian Republic), and is indeed liable for this simulation of sovereignty accepting the transfer of those assets, and taking part in that, as if it ere legitimate actions of the Italian State.

Almost the “perfect” fraud, if it weren’t that without a legitimate title of ownership, the transfer of those assets is null and void, and can be impugned nearly always. Also, the fact that the assets in question are not Properties of State of Italy is obvious: it is established with the 1947 Treaty of Peace that (at article 21) establishes the Free Territory of Trieste.

Pursuant to Article 1 of Annex X of the Treaty of Peace, ratified and implemented in the Italian legal system with Italian Law 811/1947, with the Legislative Decree of the Provisional Head of State 1430/1947 and with Italian Law 3054/1952, all public properties formerly owned by the Italian State were legally transferred becoming State-owned assets of the Free Territory of Trieste – Territorio Libero di Trieste, temporarily entrusted since 1954 to the Italian Government under a special trusteeship mandate, and over which the Italian State, the Italian Republic, has no rights.

This legal status if unchanged and unchangeable, since Italy (and even less the Municipality of Trieste acting as local representative of the Italian State) has the power to unilaterally amend the Treaty of Peace and, therefore, the very Italian legal system, for that would also violate the principles of the Italian Constitution.

However, regardless to this legal status, the wannabe real estate agents who act in breach of the law of the Italian Republic (which is their own State) are not willing to give up. And they try, by all means, to get around the obstacle looking for the weakest points to break through the dense line of the International legal order implemented in the very Italian legislation.

Also, it is important keeping in mind that behind those people, namely public authorities and officers, hides the wide network of Italian corruption: a galaxy of connections between the State and big to small mafias, which is among the main causes of the economic collapse of the Belpaese, which could prosper also in Trieste, undisturbed, for reasons of State (it is also thanks to this corruption that Italy simulates its sovereignty over the FTT).

A good example of how they “get around” the rule of law legality is the project to “recover” the area of the former Traffic Police Station. It is a big building, in the district of Roiano, not far away from the Central Train Station and the Northern Free Port. How is it possible disguising a huge, illegal real estate operation as a public interest operation? Making it believe to be working for the sake of the citizens.

Instead of a police station, they talk about a park, a wood in the middle of the city, some underground car parks, a kindergarten, a leisure infrastructure, that’s it: people are happy, the works can go on.

On the other side, this change requires demolishing all existing structures (walls, buildings) and also felling the “old” trees because, according to municipal projects, they are no longer useful (they must be diseased, ring more than 70 years old…). This is the future that awaits a spruce and some deodar cedars: does it make any sense creating a park planting new, small trees instead of the big trees that are already there? Obviously not, but this is all about business, so about money, the more useless works are there, the better the turnover. And the “progress” of urban speculations, usually made of sub-contracts awarded to Italian construction companies instead to the companies of the Free Territory, cannot stop.

However, the real masterpiece was done by forcing the police out of its station. An eviction to the police? It is not so easy… however, it was done for real: building a new station at the expenses of the City, which receives the old station in exchange to “regenerate” the old building turning it into a square. All of this, under a programme agreement between the State Property Office of the Italian State and the Municipality of Trieste.

How did they make it seem to be the legitimate owners of the asset? Easy, “forgetting” to register the obligations established with the 1947 Treaty of Peace in the acts regarding public assets, specifically, registering them as assets of a generic State, without clarifying that this State is the Free Territory of Trieste. This is the trick they have always used to attempt taking from Trieste all of its public properties, including the Free Port.

However, probably for reasons of self-defense, when it comes to the former Traffic Police Station did not transfer to the City of Trieste the ownership of the area, reserving to remove it from public property at the end of the works. Question time: is it possible starting to work in an area on which there is not even the slightest ownership title, and even inviting lots of public money in the project? The Municipality of Trieste is positive about it. The law and the principles of good administration are not. But, in the meantime, EUR 10 million of public money has already been used for a project that is flawed with absolute illegitimacy.

The idea is to put the fait accompli before them. It might even work, if there weren’t oppositions. But what if someone protests? Maybe those public officers do not understand that this “little” illegitimate real estate operation, made only to fuel the notorious Triestine “cartel” of builders that, since years, can do as it wants, unpunished, thanks to Italian authorities (to find out more about that, I suggest reading my book “Tracks of Legality” because in chapter “The system of public works contracts” I explain how this Triestine cartel or builders and its branches work) is in breach of the 1947 and of the very legal order of the Italian Republic as well?