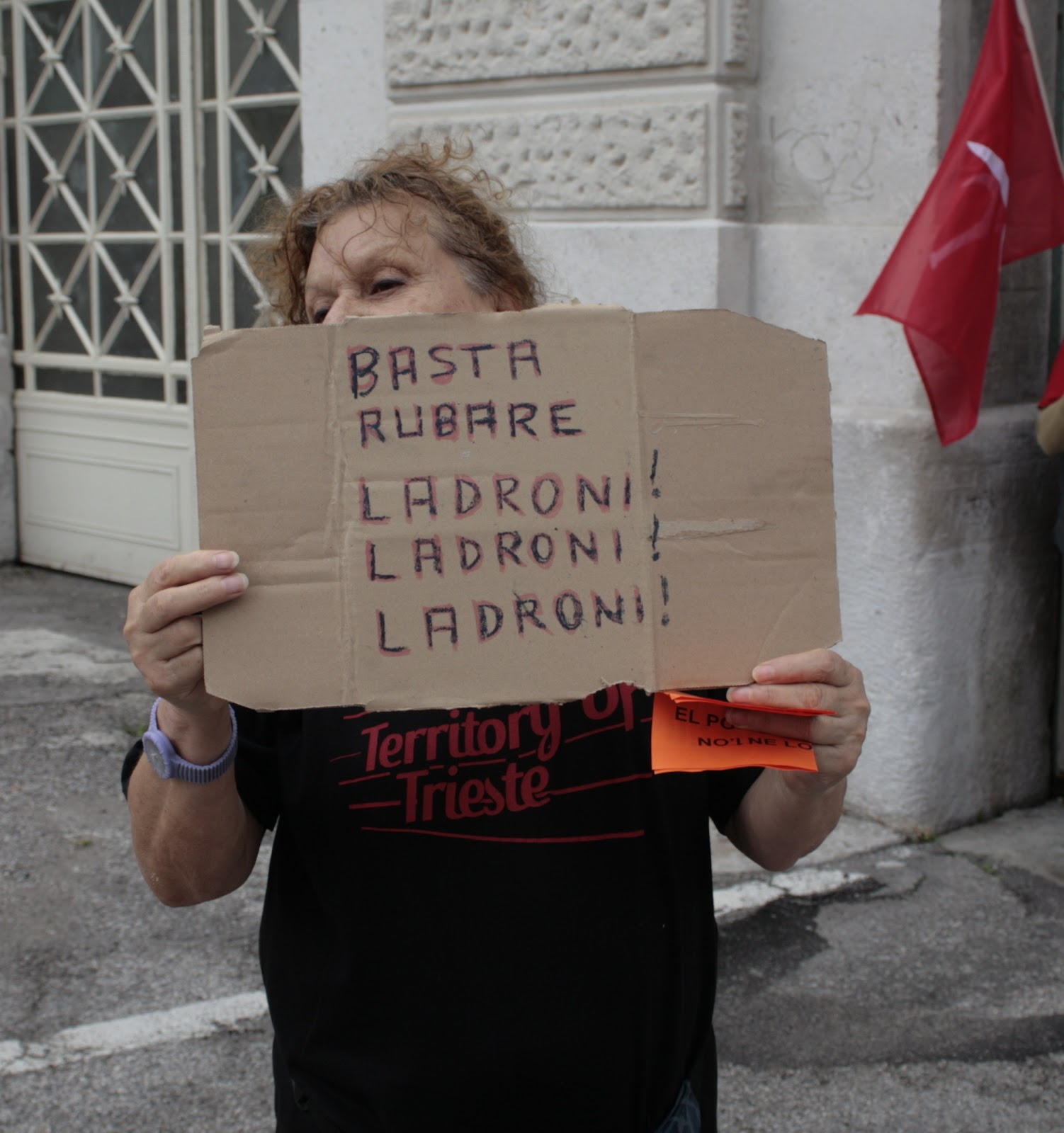 Every year, about EUR 1.5 billions are stolen to the Free Territory of Trieste

At the same time, Italian Courts, with politics-ridden judges, condemn the citizens of the FTT who claim their rights, including the right to fair taxation, granted under the 1947 Treaty of Peace.

Since 1947, pursuant to the Treaty of Peace with Italy, Trieste is the capital city of an independent, sovereign State, the Free Territory of Trieste, established under a provisional regime of Government that lasts to this day.

Since 1954, Italian corruptions, mafias, and nationalism are (mis)administering the Free Territory of Trieste, while the provisional, administering Italian authorities drain its economic resources with the old-fashioned, huge taxation of the bordering Italian Republic.

But Annex X of the 1947 Treaty of Peace rules that the Free Territory (and its citizens) be exempted from the payment of the Italian public debt. Italian taxes cannot be levied in the Free Territory of Trieste and its international Free Port: just like Switzerland, the FTT is a State with its own economy and taxation, and it does not belong to the EU.

Every year, hundreds of millions of Euro are taken from Trieste by Italian tax authorities (one example is the taxes on gasoline: LINK).

Not to mention the huge profits that the Italian State plunders from the international Free Port of Trieste, which the Treaty of Peace establishes as a State Corporation of the Free Territory of Trieste. At least 1.5 billions Euro is sent off to Rome. All at the expenses of the international community, which cannot exercise its wight to use the most strategic port in the Mediterranean.

A loss of revenue with devastating effects on the economy of the Free Territory of Trieste.

Since 2011, Trieste has lost more than 10,000 jobs. More than 50,00 in the past 40 years. Misery spreads inexorably, and it slowly turns into desperation for those who are denied their very future. This is the slow, inexorable decline that the Italian corruptions sentenced for their historical enemy: Trieste, after its “redemption”.

In Trieste, more than 3,000 families lose their incomes, and they live on the “certain” charity of the downgraded social contribution: some couple hundred Euro, which are not even paid regularly, without knowing for how long. One month after another, the tragedy repeats. Many line in front of soup kitchens. Almost like during a war.

The people who bear poverty with dignity would rather look for food in trashcans than undergo the humiliating controls of the insensitive public authorities in charge of granting meagre subsidies.

But to do so, they must be faster than the trucks of the efficient refuse collection of the City, tasked with collecting, day by day, thousand of tonnages of waste to the “listed” incineration plant: the more waste in burns, the most the former municipal undertaking produces money for Italy. This “waste” is often expired food or leftovers; it is the target of desperate people, whose only miserable meals come, day by day, by digging in waste.

This poverty is artificial.

It derives from the ongoing predation that, one year after another, Italy carries out with the tacit consent of the temporary civil administering Government of the Free Territory of Trieste.

A fiscal predation that does even go against Italian laws, despite even judgments of the Italian Court of Cassation on this matter (I did publish one in this post, about pensions in the FTT: LINK).

The administering Italian authorities seem to have forgotten the source of their authority: the 1954 Memorandum of Understanding regarding the Free Territory of Trieste, an additional instrument of the Treaty of Peace. So, the people of Trieste are suffocated by illegitimate taxation, collected in the name of a bordering State that deprives them of their properties, driving them into misery. And, if they claim their rights, they are punished by a justice system loyal to local establishment that simulates Italian sovereignty for its own gains.

To understand how similar special Italian Courts work in the FTT like, it is enough reading the grounds with which, back in 2013, lawyer Sergio Orzan from Gorizia, lawyer of the ill-famed Equitalia, requests the Court to reject the exception of the lack of jurisdiction of Italian judges in one of the appeals of the citizens of the Free Territory (see translation at the end of the post).

The Tax Commission of Trieste did go as far as to sanctioning the appellant by ordering them to pay  EUR 2,500 for “vexatious litigation” claiming the “pretentious character” of the exception of jurisdiction. Apparently, the Italian judges in Trieste don’t like being reminded that by denying the FTT they are trampling on both international and Italian law, the law of the State they claim to be loyal to, as they hide behind a façade of nationalism as ferocious as anachronistic.

An “Iron Curtain” that granted them impunity during the Cold War, or during the dissolutive crisis of Yugoslavia, but rather worn to our in our days… how long will it still last?

Translation of the abstract:

1) AS FOR THE ALLEGED absolute nullity and voidness due to the lack of jurisdiction of the State of  Italy in zone A of the free territory of Trieste.

Both the cities/towns of Trieste Staranzano and Gorizia, and the provinces of Trieste and Gorizia are part of the Italian State. As such they underly Italian jurisdiction. The deductions and considerations and conclusions of the appellant on this matter are absolutely ungrounded and inadmissible, pretentious and captious; and they shall be rejected. On the other side, the counterpart in person, by appealing to authorities of the Justice/Jurisdiction of Italy, and through Italian legal officers when it comes to the notification, does implicitly recognize that those authorities hold an actual jurisdictional power. In the specific case it is clear that the jurisdiction of the Italian judge was approved implicitly and – nevertheless – there is no foreign judge in the “Free Territory of Trieste”. 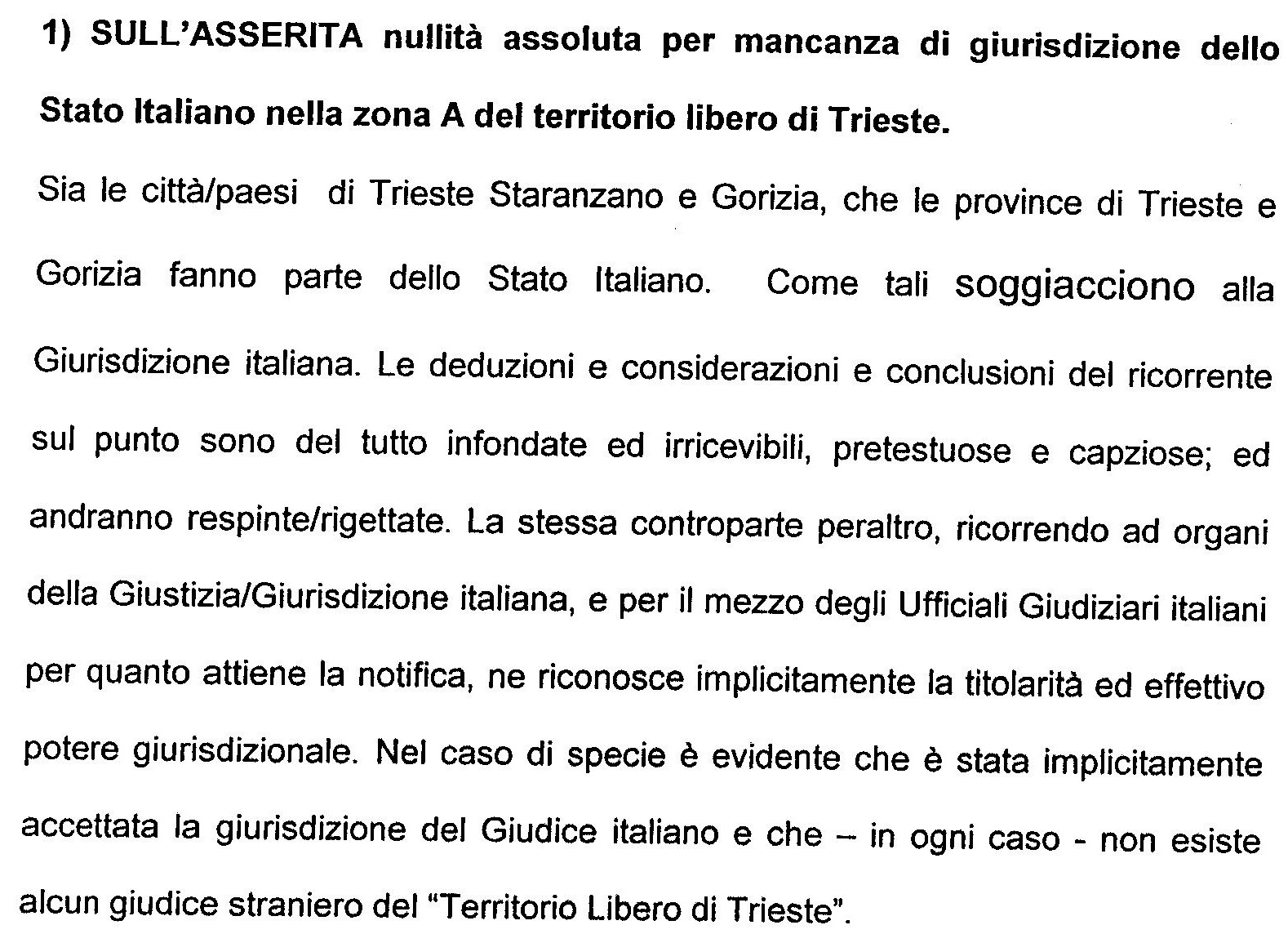