There is a very serious aspect of the environmental pollution, actually the poisoning, of the Free Territory of Trieste, and it was hidden together with lots of waste in this little tact of land by its criminal administering authorities.

It is a top-secret topic, because it revolves on an outright war action committed by Italian authorities, shielded behind the Italian temporary civil government: having used the Free Territory of Trieste and its international Free Port as the place to store and dispose part of the enormous Italian arsenal of chemical and biological weapon inherited after two World Wars, I wrote about this topic here: LINK

The storage of the drums filled with chemical and biological substances could only takes place in areas that grant maximum security, namely areas where local authorities had no power. Similar areas existed, and usually were within the Free Port of Trieste and in its areas under direct military authority (which indeed were created also in the international Port, taking advantage of Italy’s role in the NATO LINK).

The transport of the drums should take place mainly by sea, exploiting the Port of Trieste as logistics base for such traffics. From the Free Port, part of this ‘burning” material would then be redistributed on the whole territory: in military depots (for example, those in the Montedoro hills) the drums to store, in landfills those that had to disappear forever.

For this purpose verve the huge landfills opened by Italy in the present-day Free Territory of Trieste, from the Karst to the sea. Landfills in the bowels of the Karst, where hundreds of caves were “sacrificed” for reasons of State, while maritime landfills appeared in the Gulf of Trieste, landfills everywhere, hidden, or actually, “camouflaged”.

Because on top of those deadly areas, colluded local authorities allowed the construction of industrial zones, malls, bathing resorts. Exposing even more directly the people to the effects of pollution and to all other substances dumped in the environment LINK.

At the same time, underwater landfills, made of chemical weapons, played a key role in devastating the ecosystem of the Gulf of Trieste, extending their severe consequences on bordering and neighbour States (Slovenia and Croatia) LINK.

Consequences which mean degenerative diseases, which affect undefended people, as happens in the town of Trebiciano – Trebče LINK. The increasing rate of cancer in Trieste can be explained also in those terms: the exposition of the people to often deadly pollutants, largely unknown to the present day.

But it is not easy investighino this dangerous pollution, because the Italian authorities responsible for it, who control the Free Territory of Trieste, have no interest in revealing such an inconvenient truth.

This is how in a Trieste devastated by this environmental disaster, all public authorities, obsequious to the “superior” orders of those who have approved this crime of State, avoid facing an environmental question that means also settling scores with Italian authorities in the Free Territory of Trieste.

Deaths per 1000 inhabitants in each Province: Trieste has one of the highest death rates.

There are many cancers and respiratory diseases. 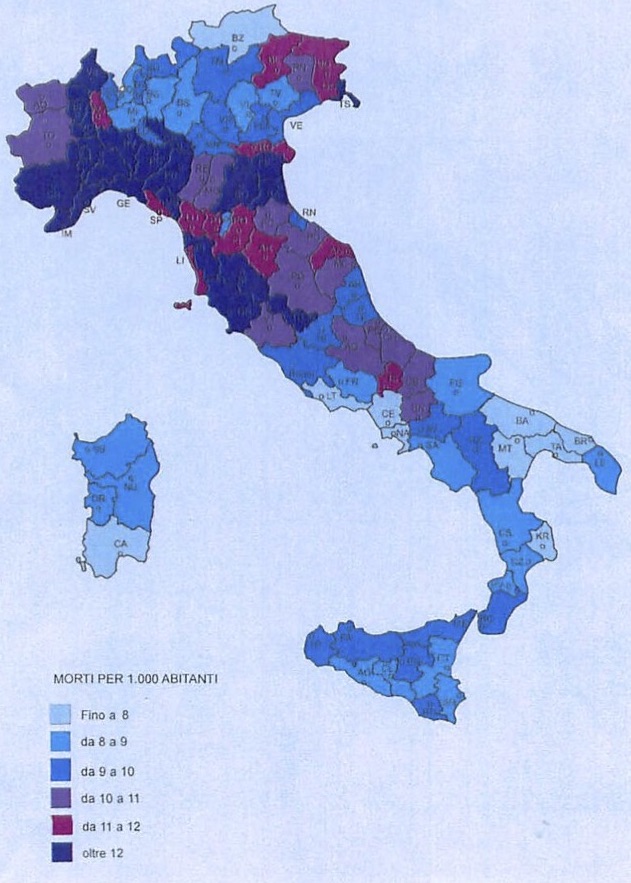