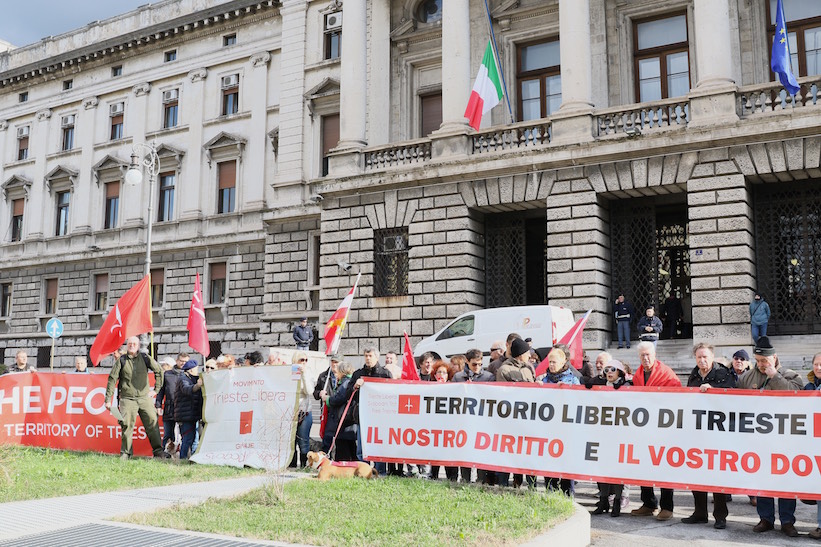 On March 10th, another trial against me was open. This time it is the trials deriving from the investigations that were open against the Free Trieste Movement on complaint of people that were expelled or have left it. It is the people we consider traitors of out cause and who, of course, are functional to the “attrition” strategy enacted by the Italian judiciary which here, in the Free Territory of Trieste, acts simulating the non-existing sovereignty of the Italian Republic, in breach of the 1947 Treaty of Peace and of international agreements.

This strategy serves to protect that corrupted system of Government forced on Trieste for reasons of State, a system that we are the only ones to be efficaciously fighting back.

The liberation of Trieste that we stand for, which consists in the re-establishment of the temporary civil administration established with the 1954 Memorandum of Understanding of London would be a critical hit for this system of Government made of pseudo-masonic mafias, which enjoys both strong roots in the criminal organizations of Southern Italy and, as for Trieste, enjoys wide impunity (just think about the enormous environmental disaster, which in Trieste was committed under the full control of Italian authorities, including the judiciary).

This new trial against me follows a complaint of Alessandro Gombac (also known as Giombi), expelled from Free Trieste in 2014, when he and others attempted, with a golpe, to seize control of the organization to run for the Italian municipal elections that are illegally held in Trieste (which, instead, Free Trieste was denouncing since as early as 2013).

Now Gombac, with others that were expelled at that time, claims to represent a non-government organization (the “Triest NGO”) that seemingly supports the right to citizenship of the Free Territory with the support of organization UNPO (closely related to the Italian Radical Party) before the UN in Geneva. Also, the Triest NGO claims to have strong ties with the Russian Federation, including its President, Putin: they talk as if they ruled the world.

However, strange enough, while claiming to support the right to citizenship of the FTT (also in former Zone B, in a way that closely resembles the claims of Italian nationalists over the lands lost in 1947, as I wrote in a previous post: LINK) before the UN in Geneva, they do not deny Italian jurisdiction over the Free Territory, therefore recognizing the sovereignty of the Italian Republic over the whole FTT and over its Free Port.

It really is strange, because, contrarily to them, whenever we are before Court, we the members of Free Trieste, who stand firmly for legality and for the rights of the Free Territory of Trieste, raised exceptions of jurisdiction, reminding the judge in charge of the trial that the jurisdiction of the Italian Republic cannot be exercised here, in the present-day Free Territory: the only existing jurisdiction here is that of the FTT itself, and Italian judges are legitimate only as long as they act in accordance with and on behalf of the temporary civil administration entrusted not to the State, but to the Government of Italy.

It is a matter of coherence and seriousness: we are not clowns in the pay of the downgraded Italian politics: we are proud citizens of the Free Territory of Trieste and we are not afraid to exercise out rights in our own State.

And we have no reason to go begging for the recognition of a citizenship that we do already have by virtue of the law: we do declare it before Court ourselves. And so, once again, while the complainant and his lawyer, both representatives of this “odd” Triest NGO that seemingly defends the rights of the citizens of the FTT in Geneva but not in Trieste, associate themselves with the Italian court for it to punish a citizen of the FTT (!), it is me to remind everyone that we are actually in the Court of the Free Territory of Trieste, that I am a citizens of the Free Territory, and the judge can legitimately act only if he recognizes the jurisdiction of the FTT.