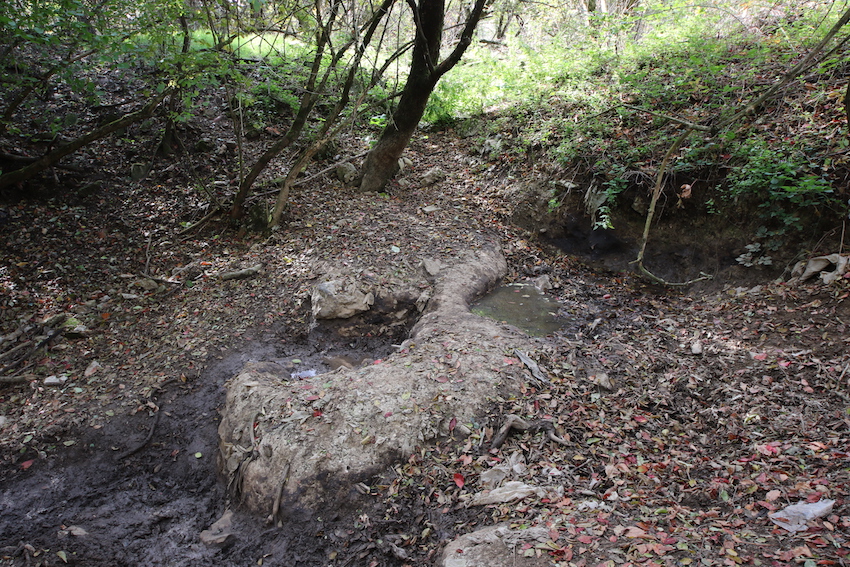 Polluted Dolina in the former dumping site of Trebiciano, top of the “square” of the dumping sites system of Trieste’s Karst (Photo: Roberto Giurastante)

With a Ministerial Decree dated 17 December 1971 (D.M. 17.12.1971, no number) Italy recognized the great environmental significance of Trieste’s Karst. This was the first actual form of protection which, even if by the wrong means had to be granted to a territory that is world famous also for its spectacular hypogeal environments.

However, this Decree – issued by the Italian Ministries of Education and of Tourism – could have been legally enforced only if properly extended to the Free Territory of Trieste by the Italian Government, sub-entrusted, to date, with the temporary administration of this State, established by virtue of the 1947 Peace Treaty (its legal situation being unchanged), because the area mentioned in the Ministerial act is not in Italy, but in Trieste.

Reads the Ministerial Decree: “Recognizing that the above mentioned areas have a remarkable public interest because they create a series of natural frameworks of significant beauty. The same areas display not only a very beautiful surface, covered in woods and lawns and then in a world of rock, including also many viewpoints that are accessible to people, and which grant a beautiful sight of the Karst plateau”.

The “above mentioned” areas included the villages of Trebiciano, Padriciano, Gropada, Basovizza; what today we know to have become a square of “shame”: the very area of the Karst that was turned into an illegal, open-air dumping site as part of an extended operation for the disposal of all kinds of waste, including industrial and military waste. Yes, “very” hazardous waste.

The highest hopes of the two Italian were nip in the bud by the very temporary civil administering Italian Government, for that had already decided to use, and was actually using, the Free Territory of Trieste as Italy’s own dumping site of State: a very useful dumping site of State to make the thorny waste of Italian mafias disappear.

And it is right in this square, which by now we can consider as one only, huge landfill, the scars of the hidden natural disaster are very visible, and they consist in many caves that were turned into horrendous, upsetting lakes of hydrocarbons.

As witness of how precious this now devastated world heritage side used to be, there is no less than this very Italian Ministerial Decree, in force, but never really enforced.

About the landfill of Trebiciano, from this blog: Where the Timavo flows.

Follows a translation of Italian Ministerial Decree of 17 December 1971:

“”Declaration of significant public interests of highlands of the Municipality of Trieste.

THE MINISTRY OF EDUCATION

MINISTRY OF TOURISM AND CULTURE

In view of the directions approved with Royal Decree No. 1357 of 3 June 1940, to enforce the previously mentioned law;

In view of the documents;

Considering that the Provincial Council of Trieste for the protection of Things of Natural Beauty, during its February 13th, 1969 meeting, has included in the list of localities to protect pursuant to article 2 of the above mentioned law, three areas of Municipality of Trieste, including also the villages of Trebiciano, Patrician, Gropada and Basovizza; […]”.

Left: Italian version of the Decree.