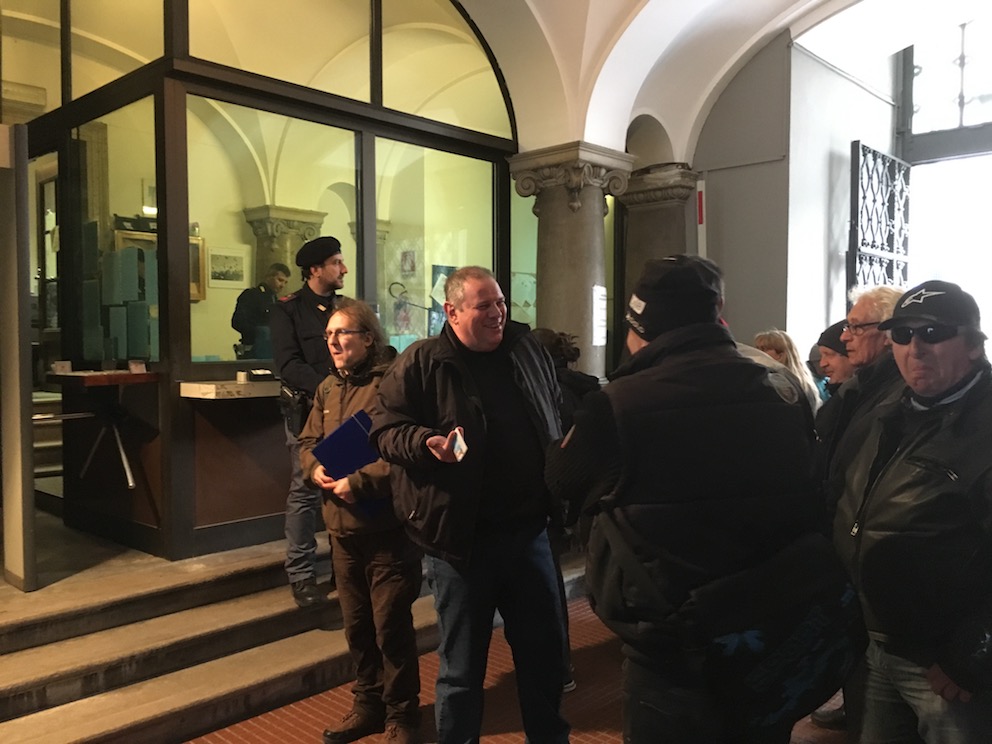 Monday 30 January: the Police controls the entrance of the Courthouse of Trieste before the hearing during which citizens of the Free Territory of Trieste are under trial for demonstrating peacefully in defence of the International Free Port of Trieste.

On this January 30th took place a new hearing of the reckless trial initiated by Italian judicial authorities against some of the peaceful participants to a demonstration in defence of the Northern Free Port of  Trieste. I wrote about this trial before on my blog, one hearing after another:

This hearing concluded a demanding week, with five trials to members of the Free Trieste Movement. Trials which, individually but also globally, show the state the judicial aggression lead by certain political and institutional circles of a Country (Italy), afraid to lose control over Trieste and its international Free Port (indeed no longer under its sovereignty since nearly 70 years). All trials had a positive outcome thanks to the strong legal defences of Free Trieste and of its lawyer, Edoardo Longo.

Among the five, it is worth mentioning the acquittal of journalist Paolo G. Parovel, one of the hears of the FTM, at the end of the trial initiated by multinational company Gas Natural with a complaint for alleged defamation; the company is the same that is interested in building a LNG terminal in the “forbidden” International Free Port of the Free Territory of Trieste. Parovel is defending himself in more trials for being the only journalist who actively defended the Northern Free Port of Trieste from illegitimate housing speculation attempted by provisional Italian authorities.

This hearing was just like the previous, from the beginning to the end. The only questioning of Italian jurisdiction was that raised by members of the Free Trieste Movement, the others adhered to the defence chosen by their lawyers.

As hey had previously adhered to the Italian “system” since, betraying the cause of the Free Territory, they supported – by actively partecipati – the latest illegitimate Italian elections, summoned by authorities and under laws of the Republic of Italy, therefore summoned in Trieste in breach of the Treaty of Peace. Once again, we’d way. But this time with this “funny” parade of fake supporters of the independence the only wanted to get a position of power to give up on the ideals of a cause that, to them, was a mere instrument to gain some visibility.

Their defences barely existed, at least when it comes to the cause of the FTT, actually, planned carefully to not bother Italian un-justice, as any person who, so par, participated to the hearings of this rather abnormal trial, ordered by a deputy prosecutor of the Republic (Federico Frezza) who, on the other side, was never at the hearings.

The Courthouse is obviously under strict control, there are many policemen to guard the entrance, but also in the Courtroom: as if the citizens of Trieste who believe in legality were dangerous terrorists. But, once again, intimidating pressing or not, the hime of the truth begins: it is the discussion in the merit.

And this only between us and the judge. During this hearing, testify the witnesses for the Free Trieste. The other defendants, those of the “Italian elections” are there, passively watching whatever happens. Their future depends on just the powerful defence of the same people they regard as their “enemies”. You can read that on their faces. Two of them were already found guilty, their position was carved out for “loopholes” in order to commit them for a separate trial in which they were basically undefended.

The witnesses of Free Trieste silence everybody. Confirming that the trial is nothing but the effect of sophisticating the truth. And that, to get there, the Public Prosecutor had no hesitation to make fundamental evidences disappear, evidences that would have made this “impossible” trial to History absolutely impossible: because what they are putting into question here is the very validity of the 1947 Treaty of Peace with Italy. And Italian magistrates are making themselves responsible of acts that subvert the very international order. But also the very Constitution of the Italian Republic: an attempt to go back in Fascism, back to the era many of them long for – in vain.

I do directly express a statement to the Court. I do it every single time, requesting respect for our rights of citizens of the Free Territory of Trieste. This time, since the judge has left out his decision on the exceptions of jurisdiction that we presented so far, on behalf of all defendants who belong to the Free Trieste Movement, I declare the direct exercise of our own right to citizenship, of jurisdiction, and of defense (recorded here, in Italian: LINK translation coming soon).

What does it mean? It means that if the auge denies the verification of jurisdiction during the whole trial, the defendants represented by Free Trieste must raise the exception of nullity and voidness of the whole trial, impugning the final decision of the Court before the United Nations and before all Signatory States of the Treaty of Peace.

We took one more step ahead for the rights of the Free Territory of Trieste.