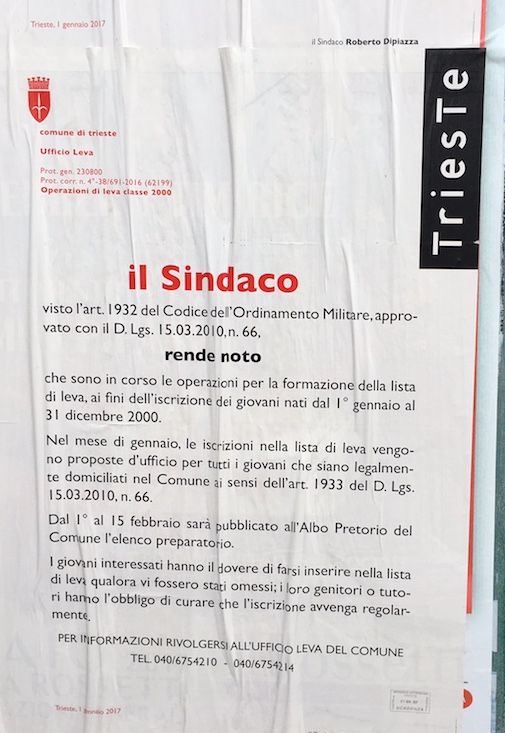 Mayor Dipiazza’s communication about the local Conscription Office and forced conscription of all male citizens of Trieste who were born in year 2000. Read it in English: LINK

Well, they try to do it, because the truth is that by doing so, Italian authorities are violating the Treaty of Peace with Italy of 10 February 1947 and all Italian laws that ratify and execute it, as well as their Government’s international mandate of temporary administration. Which means the whole legal order of Italy, starting from its very Constitution.

Because the citizenship de jure of the Free Territory of Trieste must be attributed pursuant and by virtue of Annexes VI (art. 6), VII (art. 2, paragraph 4) of the same Treaty of Peace, implemented in the Italian legal system, also derogating from national law, for the Treaty is a superior source of law.

This action against the fundamental rights of the citizens of the Free Territory of Trieste includes the obligation to include all Triestines in conscription lists as soon as they reach adulthood. This is like “entering” the Armed Forces of the Italian State: a conscription that goes against the law, subject to the Italian Military Code.

I wrote before about the forced conscription of Triestines in the Armed Forces of Italy, in post “RESISTING MILITARY SERVICE” which attracted wide interest. I described an unbearable situation of denial of a folk’s own identity by the mean of systematic repression. Because a citizen of the Free Territory of Trieste, for refusing to serve as a soldier of the Italian Armed Forces, for refusing to pronounce an “impossible” oath of loyalty, would have been labeled as deserter and imprisoned in a military prison.

The recruitment was a consequence of double deception. First of all, the “recruits” were not informed that conscription had been extended to Trieste with a decree of the General Commissioner of the Government (Decree No. 73 of 7 October 1958), which means with an administrative act of the Free Territory. The second deceit was to hide this situation using a request to serve as a volunteer, which was actually obtained filling a blank paper that the “recruit” had to sign as a “list of belongings” or with other excuses.

International indifference and other, superiori interests (the so-called “Cold War”) allowed this crime to continue for decades, at the expenses of the citizens of a State in which the international laws that should have protected them were actually turned against them. A true paradox, which caused also irremediable damages to dozens of thousand of people, whose only crime was to be the inconvenient citizens of a State that according to Italy had to disappear.