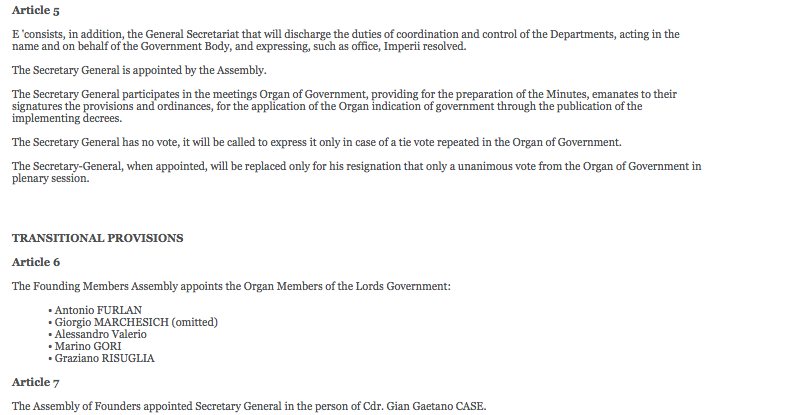 It is certain that things are changing in the Free Territory of Trieste. Everybody expects something to happen, that in 2017 there will finally be the first forms of international recognition, to confirm the unchanged legal status of Trieste and of its international Free Port. There is an atmosphere of unique expectations and hopes, here in Trieste.

So far, everybody knows that it is impossible denying the state of things. After 5 years of legal battles, the citizens of Trieste who openly declare themselves citizens of the Free Territory and refuse to recognize the simulation of Italian sovereignty over their State are constantly increasing.

Even those who do not openly take sides it waiting for the end of what many regard as the Italian occupation. It is a unique atmosphere, one should feel it first hand. It is as if people were getting ready to see this era ending, an era that consisted in the long decadence, permanent agony of Trieste, to finally prepare for the raise, on the wings of a new independent State that are legally her own since 1947, returning to the ancient splendors of a city-port, the maritime capital of Mitteleuropa, the same way it used to be with the Austian-Hungarian empire.

But the people of Trieste are not alone waiting for that moment. Italy, which like many other bordering States would receive undoubtable economic advantages for the re-establishmet of the rights of the Free Territory of Trieste, the dilemma revolves on leaving a territory on which an artificial, patriotic sacrality was built..

Because many identify Trieste with the ending point of a difficult national unity. Nationalistic myths and propaganda, obviously in contrast with the rights and the freedoms of the people of Trieste and the development of the International Free Port of Trieste. A port outside the suffocating and hegemonic control of Italy, and therefore regarded as a dangerous enemy by the Italian nationalistic mafia-like circles of State.

This is how, facing the risk that its Government loses the special trusteeship over this important international territory bordering with it, Italy (which, again, has no sovereignty over it) tries to reposition itself, to maintain that under its own control, possibly thanks to some “pleasing” Government. This is why it is necessary that, on the international level, the supporters of the Free Territory of Trieste are portrayed in a bad light, even causing ridiculous accidents.

One of those accidents is the recent, farcical establishment of a pretentious and self-declared “government” of the Free Territory of Trieste lead by a former Italian soldier and fixer and by a former Italian policeman (one is from Campania, the other is from Sicily) who, ludicrously, claim to be citizens de sure of the Free Territory and involved in their farce other small groups of pseudo-supporters of the independence who were already compromise for participating, failing, to the illegally summoned Italian administrative elections in Trieste.

Such initiatives cause laughter, maybe, but they should not be underestimated because they damage the appropriate battle for the rights of the Free Territory of Trieste that the majority of its people are actually supporting, for their only purpose it to satisfy the protagonism of small groups and irresponsible individuals who are either status-seekers of naive, and have never done anything serious of good for the Free Territory.