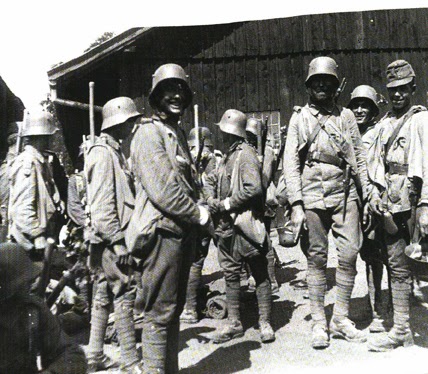 World War I was a great tragedy: in was a clash between States, but also between their different civilizations. It is when a new nationalisms emerged: it was based on the concept of race, and it would become the base for the genocidal hell of World War II.

The old European civilization, embodied by the Mitteleuropa of the Austrian-Hungarian double crown was overwhelmed by the great conflict. The first multiethnic State of Europe was the first victim of this new world order made of capitalist profits and of the denial of all fundamental human principles.

A centuries-old Empire, much more democratic than most States of the old and “new Europe”,  defended its folks at the cost of enormous sacrifices, leaving indelible tracks. More than 1,200,000 fell for Austria-Hungary during the Great War. Fallen who represented the Empire’s 13 folks, all of whom defended their land together. They defended a common flag.

Their opponents had a hard time understanding this loyalty to the Empire: to them, that Empire was oppressing the people they wanted to free. Those longing for the Imperial Army’s quick defeat could barely understand this sense of honor to one’s uniform.

It was a miscomprehension, the fruit of propagandas spread by the regimes that portrayed Austria-Hungary as an authoritarian State. Instead, its 13 folks were united by the respect of their mutual identities, languages and faiths: Christians, Jews and Muslims lived and fought together. Nothing like this would be seen again in the “new Europe”.

The sense of honor for the uniform of the army of this multiethnic empire in which Austrians, Hungarians, Bohemians, Polish, Ruthenians, Rumanians, Slovenians, Croatians, Serbs, Bosnians, Italians, Czechs, Slovaks, stood together is well represented by an Italian office in his memoir. He fought near Trient (May – June 1916), the so-called “Strafexpedition” or Battle of the Plateaux, and Austrian-Hungarian counterattack on the Italians.

“The soldiers searched the backpacks of the dead enemies. They found some small bags of soil. These were the backpack of Poles, who had brought part of their homeland with them.

Land of their oppressed fatherland, and they were fighting for the oppressor, dying along with their desperate dreams of freedom, to prevent us from giving freedom to another fatherland, to free the soil on which we were fighting.

Strange contrasts, the same as when the Bohemian cadet that we captured one day before, wounded, answered to my interrogatory about his feeling and the feelings of his Country towards the Austrian Empire, with a grieved smile, pointing at his uniform: please, don’t ask me this kind of things; I was true to my duty and that’s enough.

In the graves, on the bodies of each dead Pole, we spread the handful of holy land”.