THE RECENT COMMUNICATION OF THE INPS TO TRIESTINE PENSIONERS: INAPPLICABILITY OF THE ITALIAN LAWS ON TAXATION IN TRIESTE BECAUSE IT IS A STATE OUTSIDE THE EU

“Pursuant Law 161/2014, the Decree of date 21 September 2015, is inapplicable for the petitioner since the Country of residence in the general date of the Institute is not part of the European Union Member States nor it is a State party to the Agreement on the European Economic Area “

The Treaty of Peace with Italy of 10 February 1947 establishes for the Free Territory of Trieste its own taxation and fiscal administration (Annexes VI and VII) and not burdened with the fiscal impositions and by the abnormal public debt of the State of Italy (Annex X, article 5) or any other State.

Annex X article 8 of the Treaty of Peace grants to civil and military citizens of the of the Free Territory of Trieste the payment of their pensions by the State of Italy. The pensions payed must obviously comply with the laws in force in the Free Territory of Trieste, therefore, under article 5 of Annex X, they cannot be taxed by the State of Italy, since that would constitute a payment of its public debt.

In order to have legal force in the Free Territory of Trieste, all Italian laws must be adapted and extended to it, since they cannot be enforced as they are because that would constitute an illegitimate superimposition of the legal order of another State to the one that already exists, which is granted by both the Peace Treaty and the international community.

The obligation to ensure which laws can have legal force in the Free Territory of Trieste is due to the Government (not the State) of Italy, in its role of provisional civil trustee on behalf of the Governments of the U.S.A. and of the U.K. under the Memorandum of Understanding of London of 5 October 1954, and on behalf of the United Nations Security Council under article 21 of the Peace Treaty.

The extension of the laws that have legal force for the Free Territory of Trieste must take place with a suitable legal measure (usually a decree, and always in compliance with the Peace Treaty) of the General Commissar of Government appointed by the Italian Government; without this procedure, all laws or normative acts are proven to have no legal efficacy in the Free Territory of Trieste, towards its citizens, residents and the international community.

The question was made clear by the Italian Supreme Court of Cassation itself with judgment No.323 of 26 February 1965 concerning the inadmissibility of the extraordinary Italian income tax to Italian citizens residing in Trieste. For instance, the Court clarifies that “…the law establishing the tax in question, has not been extended to the Free Territory of Trieste, neither by the allied military government not by the current Commissar of the Government” and, therefore: “…it is clear that the tax concerned does not apply to the properties themselves for being located in a certain territory, but for their whole and indivisible belonging to a certain subject, with the consequence that this tax cannot apply to those who are not subject to it by law… consequently,  due to the lack of the extension of this legislative measure to the free territory of Trieste, the tax obligation did not arise in respect to that”.

To this effect, there is also the recent communication of the INPS in January 2016 to the pensioners who reside in Trieste, with which the Italian social security body informs about the inapplicability of the Decree of date 21 September 2015 which cannot even be extended to the territory of Trieste, since the “is not part of the European Union Member States nor it is a State party to the Agreement on the European Economic Area”.

The Decree of 21 September 2015 revolves on the enforcement of the Consolidated Law on Income Taxes as provided with Decree No. 917 of the President of the Republic of Italy on 22 December 1986. But Italian income taxes cannot be enforced towards the citizens of another State, as the Free Territory of Trieste is – as well as not being even associated with the EU.

The present-day Free Territory of Trieste, as denounced by the Free Trieste Movement in its petition, presented to the European Parliament on 15 June 2015, is in facts a State that does not belong to the EU, entrusted under a provisional mandate and international representation of the Government of a Member-State, Italy.

Due to this, the provisions of the Treaties establishing the EU can only apply to the Free Territory of Trieste by activating the special norm of article 355 No. 3 TFEU (also 227 n. 4 TEEC, and 229 TEC) regarding «to the European territories for whose external relations a Member State is responsible» («ai Territori europei di cui uno Stato membro ha assunto la rappresentanza nei rapporti con l’estero // aux territoires européens dont un État membre assume les relations extérieures»), which means without titles of sovereignty, but consequently to special cases of international law.

The ceasing of Italian sovereignty over Trieste and its territory has been confirmed on 23 October 2015 with act S/2015/809 of the United Nations Security Council, which confirms also the obligation of the Italian Government to grant the legal system of the Free Territory of Trieste and the rights of its citizens.

This is why the pensions payed in the Free Territory of Trieste to citizens and residents of the State of Italy must be relieved from all Italian taxes, as long as the provisional administration does not define the right taxes of the Free Territory of Trieste, because such tax cannot be levied. Translated into practice, this means a minimum 25% increment of the monthly earning for each of the nearly 90,000 pensioners in Trieste. With retroactive effects due to the illegal taxes they had to pay through the past years.

This is only some of the “side” effects of the actual enforcement of the Peace Treaty and the establishment of the rule of law in theFree Territory of Trieste, to both of which Italy tries to escape, going as far as to have its institutional representatives threat to suspend the payment of pensions to all citizens who call for compliance with the laws of a State that is recognized and protected by the UN: mafia-like threatens against international legality. 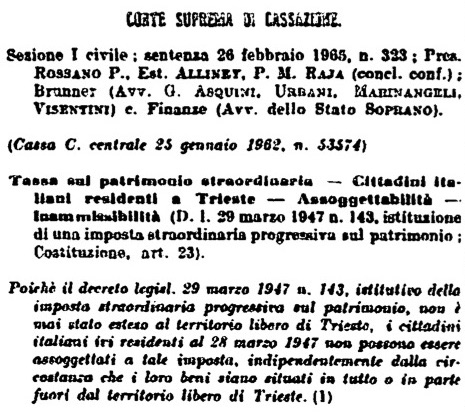 Judgment of the Italian Supreme Court of Cassation No. 323 of 26 February 1965: the laws of the Republic of Italy are null and void is not extende to it by an act of the provisional trust Government.