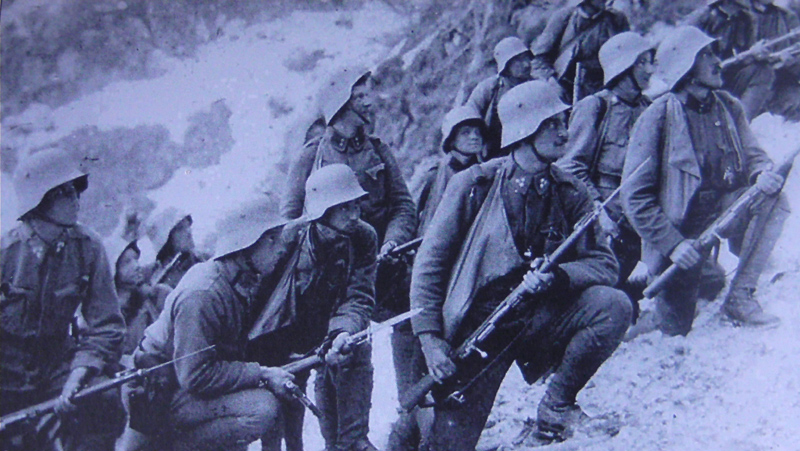 27 October 1918: Mount Pertica is the defensive bulwark at the Mount Grappa frontline. Italians and Austrians have fought for the 1,549-meters heigh mountain more than for any other and, after the Caporetto-Kobarid breach, the frontline is firm on the Piave. In 1918, the Austrians conquer and loss the Pertica over and over again during the year: this time it is in Italian hands.

The war is ending. The Austrian-Hungarian double monarchy is falling apart, assaulted by many nationalisms. The glorious Empire that wrote the history of Europe, the unique tolerant State above nationality, is imploding; the totalitarian ideologies emerging from the terrible massacre that is war are overwhelming it. And the victorious Austrian-Hungarian armies, never defeated on the battlefield, are dissolving quickly.

The situation on the Italian front is worsening. The divisions, disbanded, are retreating. Czechs, Slovaks, Hungarians, Slovenes, Polish, Ukrainians, Ruthenians, Serbs, and Croats, all want to return home, in the new Nations that are rising from the ashes of the Empire.

But there are still divisions standing firm, holding the frontline without giving up, to the end.

The glorious 7th Infantry Regiment Khevenhüller is one of them. It is an undefeated Regiment, one of the most decorated of the Austro-Hungarian army, and it is ready to fight, alone, its last battle: the attack to Mount Pertica.

The Italians call them “Diavoli bruni” (the Brown Devils).

They are brave mountain troops from Carinthia, they won on the S. Michele, on the Julian Alps, at Caporetto, and in the previous battles on Mount Grappa itself. However, at this point the Regiment is an empty shell of the proud Regiment that left Klagenfurt in July 1914, surrounded by cheering residents, off to the Russian front.

As the war is in its last days, the Regiment is reduced to 1/3 of its original forces. Little more than a thousand man. They are a few veterans of many previous battles, together with the reserves of the territorial troops and the boys. The backbone of what used to be one of the élite units of the Imperial-Royal army are youth, 17 to 18 years old, side by side with men in their forties.

An attack to the Italians would be vain: no other troops can support it. After conquering the peak of the Pertica, the Khevenhüller have no way to keep it. But orders are not to be questioned: the Pertica must be conquered!

It is important showing, once again, for the last time, the valor of Austrian soldiers. And so, to the assault!

After marching two hours in the night to approachhe target, at 5AM the Regiment is in the ready to attack. Three battalions attack at the very same time, the Austrian artillery covers them.

The assault troops precede the battalions: they myst  get rid of the Italian machine gun pits. The fire of Austrian artillery covers their advance, one step after another. Even excessively. Short fire causes the first victims among the Austrians. The Italians, taken by surprise, organize the defense. Machine guns crackle in the night, fusilier fire intensifies. But the human tide of the Khevenhüller is inexorable.

One after another, Italian machine gun posts are silenced.

At 6.15AM, the three battalions of the 7th Regiment break through Italian trenches and, after fierce hand-to-hand combats, they capture the peak of the Pertica. But after conquering it with such an harsh fight, they must defend it: the Italians counterattack.

The Khevenhüller repel the first Italian wave using the heavy machine-guns brought they have brought on the peak. However, without reinforcements, running out of ammunitions, the men of the 7th Regiment must draw back. At 10.30AM the Italian Alpini take the Pertica once again.

On 27 October, 1918, on Mount Pertica, the 7th Regiment Khevenhüller loses 862 men and 35 officers: two-thirds of its remaining forces. The indomitable soldiers who, instead of retreating, fought to death for the honor of their flag have written the last, glorious page of the Imperial-Royal army of Austria-Hungary.

One thought on “THE LAST BATTLE OF THE “BROWN DEVILS””