August 27th, 1917, morning, eastern frontier of the Bainsizza – Banjščica plateau. After breaking through the first line of the Austrian defenses, Italian troops attack altitude 830. It is an important peak, conquering it would mean destroying the new, arrear line of defense of the Austro-Hungarian 24th Corps which, on a 22-kilometers frontline, is only defended by 52 battalions.

There is only one Austrian company that can face the attack: it is the 4th Company of the 6th Bosnian Jäger Battalion. The “Bosniaken” counterattack, soon they are under the fire of artillery and the mortars, they suffer severe losses, but they keep advancing against the overwhelming Italian troops who are seizing altitude 830.

The commander of the company falls, struck to death, and so it is Corporal (Unterjäger) Rustan Kapetanović, platoon commander, who has to take his place, leading the final assault of the “Bosniaken” against the Italians. The battle becomes a hand-to-hand struggle, but the action of the Jäger is unstoppable, and it overwhelms Italian troops, who beat a retreat.

Altitude 830 is once again in Austrian hands. The second defense line of the Bainsizza – Banjščica resists, and it won’t fall again before the end of the war.

But the war ends also for 21-years-old Corporal Kapetanović. Hit by the shrapnel of Italian grenades during the final stages of the battle, he will lose vision in both eyes.

For his indomitable courage, he will receive the Golden Military Merit Medal (Militär-Verdienstmedaille), the highest military decoration for Austrian volunteer soldiers. 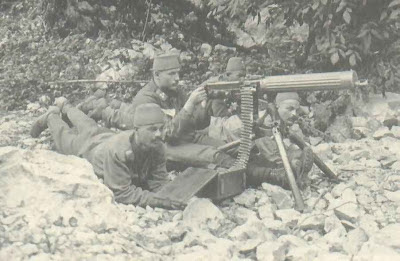