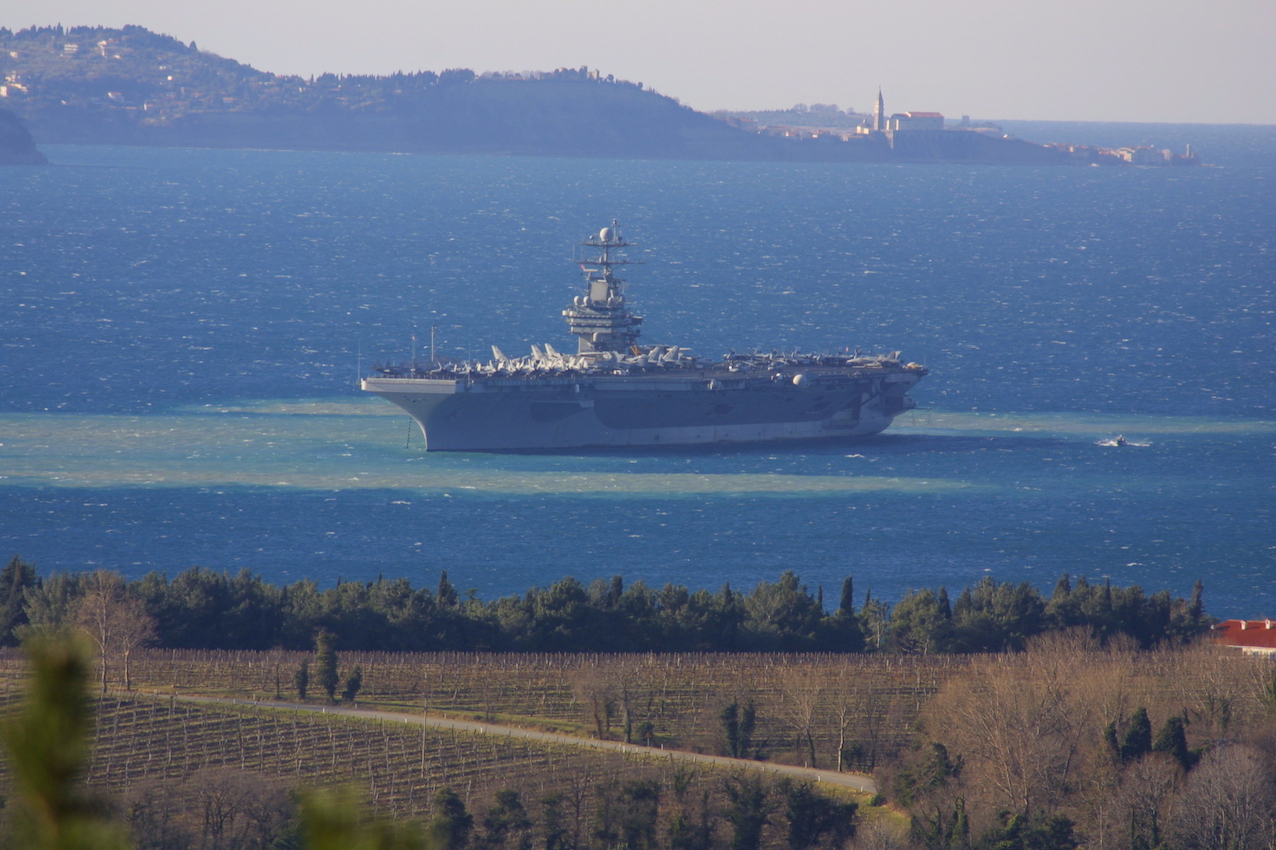 There are many elements in the ongoing, illegal simulation of Italian sovereignty over Trieste. Indeed, the provisional Italian authorities of the present-day Free Territory of Trieste are desperately defending it.

One of the most interesting aspects is the title of Italian armed forces (or armed forces in general) to act in a State “demilitarised and neutral”. So rules Annex VI, art. 3 of the 1947 Treaty of Peace with Italy.

“No armed forces, except upon direction of the Security Council, shall be allowed in the Free Territory“

Annex VI establishes in the “demilitarised and neutral” Free Territory an international Free Port. It is the only one in the world. It can only exist as a State corporation of the Free Territory, and it is managed by an International Commission that unites representatives from more than 20 States.

This means the Treaty created a new economic haven for the freights, enterprises and governments of all States. However, this port hosts not only the Italian Military Navy: it is also registered as NATO nuclear port.

At first glance the two things seem irremediable contradictions (and the decision of the administering Italian authorities to extend Italian military service in Trieste doesn’t help their case).

The only way to understand this complex situation is in the laws.

Under Resolution S/RES/16 (1947), the UN Security Council is the international guarantor of the Free Territory’s integrity and independence, as repeated by the Treaty of Peace itself (art. 21).

Why this clause? Easy: after Trieste became independent, on September 15th, 1947 (when the Treaty came into force) the Allied armed forces in the area established its first provisional Government. The present-day Free Territory’s first Government was the British-US A.M.G. F.T.T. (Allied Military Government Free Territory of Trieste). In other words, troops of the British and U.S. Governments.

The A.M.G. F.T.T. received a special trusteeship mandate, which was to last until the UNSC would appoint a Governor for the Free Territory of Trieste.

However, the tensions of the Cold War prevented the appointment of the Governor of the Free Territory of Trieste within the short terms expected under the Treaty of Peace.

The A.M.G. F.T.T. administered Trieste from 1947 to 1954. During this administration, the city was rebuilt, and its port played a key role in the supply of Central Europe, especially in the transport of US aid for European Reconstruction (Marshall Plan).

Everything changed in 1954, when the Governments of the United States and of the United Kingdom sub-entrusted the present-day FTT to the Italian Government’s temporary civil administration.

Since 1954, the Italian Government is also the temporary civil government of the Free Territory of Trieste. This authority is exercised through a Commissioner in the Region, established with the same Italian law that established Autonomous Region Friuli Venezia Giulia (art. 70).

The ultimate evidence of this is that Italian Constitutional Law 1/1963 is in force in the Free Territory of Trieste. It is by virtue of its publication on the Official Bulletin of the General Commissioner of the Italian Governor for the Territory of Trieste No. 7 of March 11th, 1963.

This is the law. Buried under decades of nationalistic propaganda and violations. Free Trieste is now working hard to re-establish the rule of law.

But let us go back to the armed forces in the Free Territory of Trieste.

The mandate entrusted to the Governments of the United Kingdom and of the United States included both civil administration (again, sub-entrusted to the Italian Government in 1954), and the military defense of the new State and of its international Free Port. This makes sense, not only because of the tensions of the Cold War, but because of the notorious attempts of certain Italian circles to annex the whole FTT with a military coup (LINK).

And this is one of the reasons why Trieste’s military defense had to be sub-entrusted to an international organization without conflicts of interest: the North Atlantic Treaty Organization. This is why the international Free Port of the Free Territory of Trieste is also a nuclear military port. It follows that when they are in Trieste, Italian armed forces are not representing the Republic of Italy, they represent NATO.

But for decades the Italian administering authorities have hidden those details. Not really out of fear for the people of Trieste, rather, out of fear that some of the signatories of the Treaty of Peace that does no belong to NATO (maybe Russia or China, both UNSC permanent members…) ask why NATO is in Trieste. The proper answers of the United States and of the United Kingdom would probably dispel the propagandas about Trieste’s legal status (who are as well permanent members of the Security Council).

Such a “scandal” would have destroyed all lies about the “return of Trieste to Italy” which are important not really for sentimental reasons, but for economic purposes. Not only the international Free Port of Trieste is a competitor of Italian Ports, but if the citizens of Trieste were to find out that their civil, economic, and political rights were trampled on for decades, they might seek justice…

And this is why the status of the nuclear Port of Trieste was only discovered in 2003, after I presented specific complaints o the European Commission. I denounced the lack of the External Emergency Plan – E.E.P. of the nuclear port of Trieste (I have told this story in detail in investigative book “Tracks of Legality – how Italian mafias and corruptions pollute the Free Territory of Trieste”).

Until now the Prefect (and Commissioner of the Government) in Trieste refused to release the document. Despite it being fundamental to face a radiologic emergency. The reason is simple: the nuclear Port of Trieste has no E.E.P.

Because the very drafting of an E.E.P. would have given raise to inconvenient questions about the international Free Port of Trieste (which, again, is a corporation of State of the Free Territory of Trieste) and could have revealed the common source of the mandates of the Italian Government and of the NATO. This is why the non-existent E.E.P. was “classified” and thus unavailable to the citizens, depriving them of the means to face a nuclear emergency.

But facing an infringement procedure before the European Union, Italy had to give up. The E.E.P. of the nuclear Port of Trieste exists and is publish, even is with many limitats.

This happened in 2007. For the first time, document that were classifies under “secret” became of public domain, and someone started asking inconvenient questions about the international status of the Free Port of Trieste.

This was an important first step. The following steps were opposing to Spanish multinational company’s LNG terminal in the Free Port of Trieste (LINK) to the legal actions preventing the illegal attempt to urbanize its northern sector (LINK). And it still is the cornerstone of the actions to re-establish the rule of law in Trieste and in its unique port.

The present-day Free Territory of Trieste cannot be a land of legality as long as its international Port continues to be hostage of certain States and is classified as a military nuclear port.

Links to understand the radiological emergency in the Free Territory of Trieste (from Greenaction Transnational):