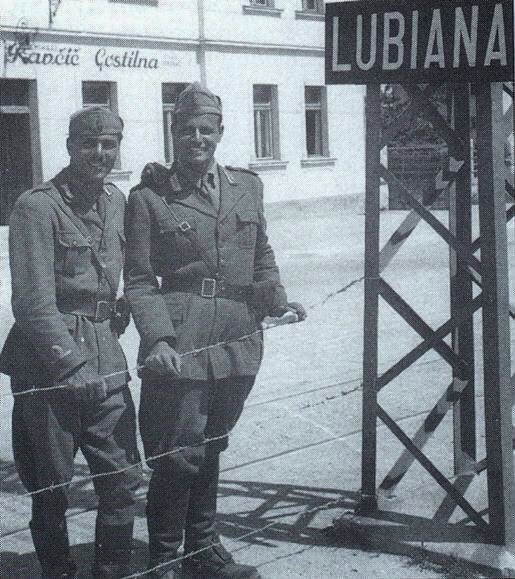 Italian officers have themselves photographed near the barbed wire with which occupying Italian authorities had circled the Capital City of Slovenia, Ljubljana, transforming it in a huge prison camp. Thousand of people were reporter in the many Italian concentration camps: Rab and Gonars, Visco or Monigo, Renicci and many more. Thousand of civilians, Slovene and Croatia, especially children, women and elderly die, their only crime was not to be Italians. In the camp of Rab, the average death rate was superior to that of the Nazi’s concentration camp of Buchenwald.

FOR GOD’S GRACE AND WILL OF THE NATION

KING OF ITALY AND ALBANIA

Considering an action urgent and necessary;

Hear the Council of Ministers;

Upon request of the DUCE del Fascismo, Head of the Government;

We decree and declare:

The Slovene territories, whose borders are marked as in the annexed map, signed by the DUCE , Head of the Government, upon Our order, constitute an integral part of the Kingdom of Italy and constitute the Province of Lubiana.

With Royal Decrees, upon request of the DUCE del Fascismo, Head of the Government, Minister of Internal Affairs, the regulation of the Province of Lubiana shall be established since, as that area has a completely Slovene population, it will have an autonomous regulation in regard to the ethnic characteristics of the population, the geographic position of that territory and to the special local needs.

The functions of government shall be exercized by an Alto Commissario (High Commissioner), appointed with a Royal Decree upon proposal of the DUCE del Fascismo, Head of the Government, Minister of Internal Affairs.

The Alto Commissario shall be assisted by a Consulta (Council) consisting in 14 representatives chosen between the producing categories of the Slovenian population.

Military service won’t be mandatory for the Slovene population of the Province of Lubiana.

All official acts shall be written in both languages.

The Government of the King is allowed to publish in the Territory of the Province of Lubiana the statute and the other laws of the Kingdom and to issue the regulation needed to rule it with the laws which are in force there as well as with the regulations that shall be established under Article 2.

This decree comes int force on the day it is published in the Gazzetta Ufficiale del Regno and it shall be presented to the Assemblee legislative (Legislative Assemblies) to be converted in law.

The DUCE del Fascismo, Head of the Government, is authorized to present the pertinent draft of the law.

We order that this Decree, upon receiving the seal of the State, is collected in the Raccolta ufficiale delle leggi e dei decreti del Regno d’Italia (Official Collection of the laws and decrees of the Kingdom of Italy), sent to whoever has the duty to observe and enforce it.

This is the text of the Italian law with which Ljubljana was annexed to Italy. And, with it, the southern part of Slovenia. It happened on May 3rd, after the assault of the Axis Powers which, in 12 days, had occupied the Kingdom of Yugoslavia.

The Italian military occupation of the “new province” was very tough. Italian troops committed atrocious war crimes against the Slovene population. The city of Ljubljana became an openair concentration camp.

The very cruelty of the occupants played a role in increasing the partisan’s struggle for freedom against the hated fascists. With shootings and mass deportations, the two and one half year of Italian occupation represented one of the darkest chapters in the history of the Slovene folk.

A nightmare that ended only with the war itself, with the defeat of the Axis Powers. World War II costed to small Slovenia 60,000 casualties on a total population of 1,600,000 people.

Slovenia did finally gain the longed independence in 19511, about fifty years after and only at the dissolution of the Federal Republic of Yugoslava.

Yet, to Italy, the Provincia di Lubiana remained part of the State until 2009, when the constitution of the annexed Territory was finally cancelled.

A true specialization in the violation of international treaties, it makes Italy a rather extraordinary country. Besides the province of Ljubljana, the Treaty of Peace of 1947 did also rule, due to the establishment of a new independent State, the Free Territory of Trieste, the end of the province of Trieste as a legal entity of the State of Italy. But, once again, Italy preferred forgetting international obligations. This is how, in Trieste, Italy simulates a sovereignty that does not legally exist, and it extends it over the international Free Port.

Two non-existing provinces under the thumb of Italian occupants and a territory yet to become free: the “Free Territory of Trieste.

As for the primates of anti-fascist resistance in Europe, Slovenes to also have the temporal one. Because, in facts, they had to start it in the 1920s and 1930s, in the bordering regions of the Austrian-Hungarian Empire which were ethnically Slovene, Croatian or mixed (about 850,000 people) that the Kingdom of Italy had annexed as it had expanded in the East with World War I:  the Kras, Istria, Fiume-Rijeka and Dalmatia, where it subjected these three groups, and then also Jews in 1938, to racial genocides and to increasing violence, namely said “bonifica etnica” against “razze inferiori” (Ethnic clean-up of inferior races).