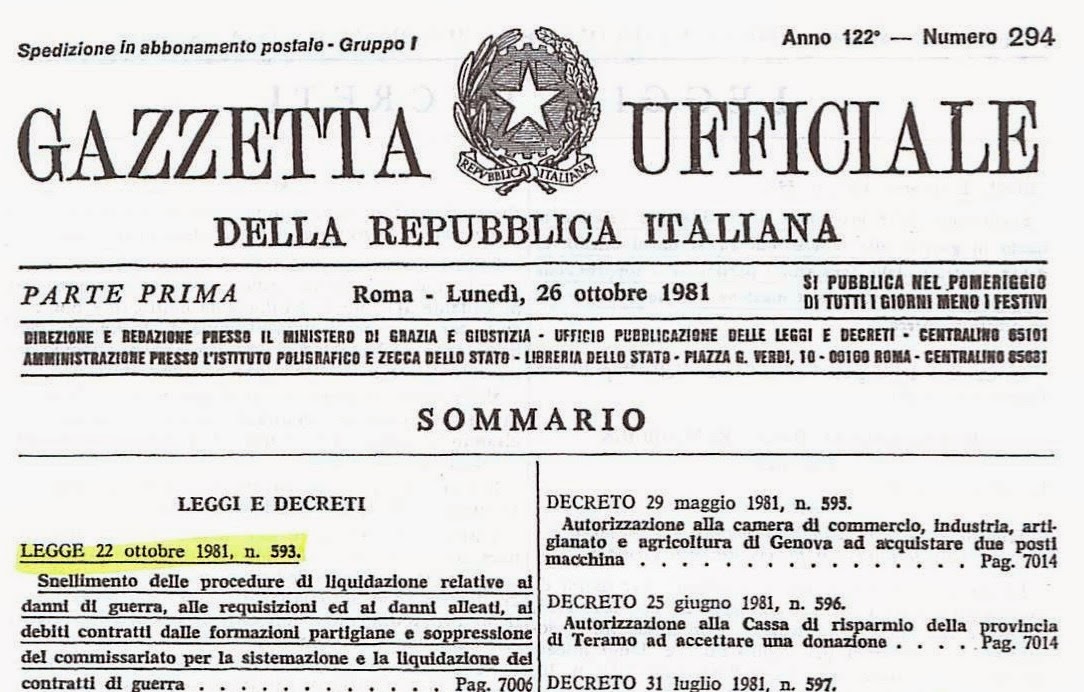 Official Gazette No. 294, October 26th, 1981. Italian Law No. 593 of October 22nd, 1981 is mentioned in the following article as it is relevant for the question of the Free Territory of Trieste.

Italy recognizes the Free Territory of Trieste. The Italian Government accepted to become its temporary civil administering Government under the 1954 Memorandum of Understanding of London.

Even before that, under the 1947 Treaty of Peace with the Allied and Associated Powers, Italy committed to compensate loss and damage sustained during WWII (Part VII, art. 7).

As for the public and private properties within the Free Territory, compensations are established under Law 955 of September 29th, 1967, and under Law 593 of October 22, 1981. Both laws are in force.

What is even more interesting, is that those laws confirm that, contrarily to popular propaganda, the Free Territory and its administration exist even after the establishment of Region Friuli Venezia Giulia and after the bilateral political treaty “of Osimo”.

One more evidence that the simulation of Italian sovereignty over the present-day Free Territory and its international Free Port conflicts with Italian laws. Laws that all Italian citizens must respect, including public officers.

Law 955 of 29 September 1967, establishes (art. 16) the criteria to compensate war damages occurred in the Free Territory of Trieste and in other areas that are no longer under Italian sovereignty.

One more evidence that under international treaties Trieste is no longer part of Italy.

And it is also an evidence that the inclusion of the municipalities of then “Zone A” of the Free Territory in Region Friuli Venezia Giulia wasn’t an annexation (which would have violated even Italian laws), rather, it was a simple administrative measure (see art. 70 of Italian Constitutional Law 1 of 1963).

Law 593 of 22 October 1981 is about speeding up of the procedures to compensate war damage. Art. 9 deals with damages to private houses.

This law came into force four years after Italy ratified the Treaty “of Osimo”. A bilateral agreement that confirms (art. 7) the 1954 MoU and so Trieste’s temporary civil administration.

Indeed, the MoU is an executive instrument of the Treaty of Peace. Its part regarding the present-day Free Territory of Trieste is in full force. The mandate over former zone B expired with the dissolution of the Yugoslav Government. That area’s inhabitants self-determinated becoming part of the new independent sovereign Republics of Slovenia and of Croatia, recognized by the United Nations and by the International Community.

In view of Italy’s own laws, which fully recognize the Free Territory of Trieste, how can the local nationalistic lobby explain the Italian Government, and the International community, that it is simulating Italian sovereignty over Trieste… against Italian law?

Follows the original text, from the Italian “gazzetta” ;

9 thoughts on “THE FREE TERRITORY OF TRIESTE AND WAR DAMAGES”