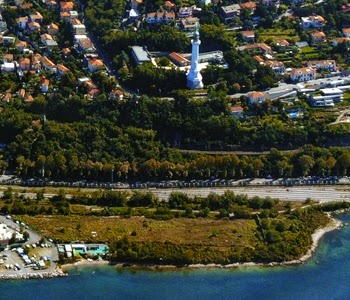 There is a hidden war, conduced against the Free Territory of Trieste, that keeps claiming new victims, day after day. It is the war against the environment of Trieste and or its Territory, used as State dumping site for decades. No one talks about it, because this enormous legacy is hard to bear. A crime against nature, raped for State reasons. A crime against a harmless population, forced to bear the pollution caused by the State of Italy and to pay its consequences.

Digging in the dumping sites disseminated in this small strip of land in Northern Adriatic, buried under the enormous mass of the waste of the mafias, there still are the many evidences of this armed aggression against the occupied Country: the Free Territory of Trieste, assigned under trusteeship administration to the Italian Government, that would hand it over to the State of Italy, which proceeded militarizing it. An annexation covered up by the International Community and conduced by weapons and deception, yet, not less cruel for the conquered folk, deprived to its own rights.

Currently, environmental pollution is seriously hampering the open game for the restoration of the legal status of the present-day FTT. Because it is here, in this place administered by Italy that are concentrated the majority of the dumping sites that collect toxic and hazardous waste, the product of international trafficking. Dumping sites running from the Plateau of the Kras to the sea, with the direct involvement of the Free Port of Trieste. This is now a serious problem for international diplomacy.

As a matter of fact, the seashore of the present-day Free Territory is covered with marine and submarine dumping sites that extend from the Northern Free Port to the current border with Slovenia. This means about 30 Kilometers of high-rate pollution. A mostly unknown pollution. Just to make it clear, all kind of things ended up here, from sludges to bottom and fly ashes, to asbestos to radioactive waste, to Explosive Remnants of War, bombs and others, including chemical weapons. Bus these dumping sites, and the free zones of the Port of Trieste, were also convenient deposits for the weapons needed for special operations of the Italian services (and not only for them) during the Cold War. A Cold War that here in Trieste has never ended.

The problem is furthermore complicated because these dumping sites lay within an international territory, namely the Free Port of Trieste, which is outside the jurisdiction of any State. So was established with the Treaty of Peace of 1947, in force, and with Resolution S/RES/1947 of the UNSC. Even if it is very easily attributing the responsibility of that to the Italian Government, which has departed from the mandate of trusteeship administration, allowing to a Third Country such as the Republic of Italy to mangle the environment of the Free Territory, the solution is much less easy to find. The Italian Government should sue the State o Italy or respond of the damages that has caused in person. An institutional conflict without solution. The only actual possibility to solve it would be the remediation of the environment dictated by the United Nations and the Signatory States of the Treaty of Peace of Paris. And, to do so, it is necessary restoring the legal system in force as for the Free Port of Trieste, appointing its administrators as envisioned by the Treaty of Peace. Without it, no law could be enforced within the Port of Trieste and no decision could be taken. Unless someone wants to do it with illegal acts, the way the Italian State did it to this day.

The journey in the system of dumping sites of the Free Territory is an immersion in the history of this injured land, raped to the core of its right to exist, but also in the actual validity of international agreements following WWII. And that is useful to understand that the solution to this new and old international conflict cannot but involve the respect of legality, meaning the international treaties that on which the present world order is grounded.

When it comes to marine dumping sites, that of Barcola certainly falls among the most interesting, is right on the northern edge of the Free Port of Trieste, (under the Faro della Vittoria) marking its border. Behind it there is another huge dumping site, then turned to the Pinewood of Barcola, which happens ot be the main seaside resort of Trieste. This is another characteristic of the innovative system created by Italy in this occupied territory, which has nothing better than other zones – from Campania to Somalia – under control of organised, Mafia-like criminality: tourist resorts above dumping sites of poison. It’s almost useless adding that Trieste is on top of European statistics when it comes to the number of tumoral illnesses affecting its population. 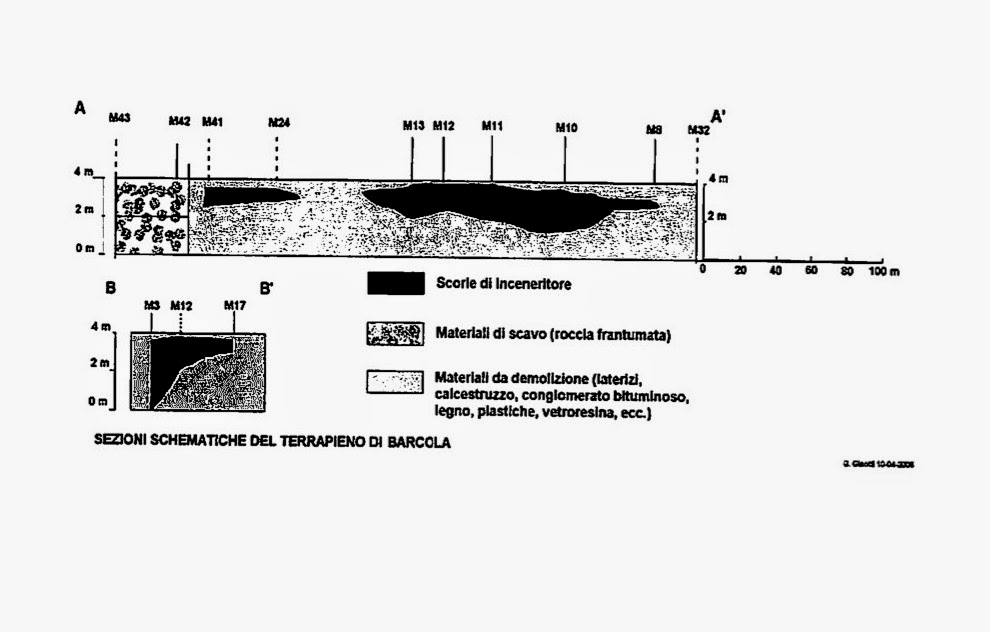 The dumping site of Barcola is within the Northern Free Port, often called “Old Port” and it marks the border with the bathing waters of Barcola. From 1966 to 1989 it was used as uncontrolled dumping site of the Municipality up to covering a surface of about 70.000 m2 storing a volume of waste over 550.000 m3. The dump of waste by the sea took place without safely seals (something it shares with all marine dumping sites in Trieste) which resulted in a leaking of waste involving not only the basing of the port nor only the Gulf of Trieste. A rough planimetry showing the realisation of the embankment of Bacola

The dumping site of Barcola has been useful, during its long life, to maintain an institutionalized system to dispose waste, its strongholds being the Triestine Kras, with its hundreds of doline, pits, and caves, as well as the huge dumping sites realized in the valley of torrents Rosandra and Ospo. Expanding in the sea was probably the last phase of this operation of military depredation of the territory. Barcola was kind of relief valve of the production of uncontrolled waste that, from anywhere, were dumped in the present-day Free Territory of Trieste. With the silent disinterest of the United Nations, the let Italy do what it wanted in order not to bother other balances and precarious interests.

Due to its strategic position, the embankment/dumping site of Barcola was under the control of the Comando Militare Italiano del Nord Est as well as a military airbase that maintained a permeant station over there.

The possibility for an ulterior enlargement of the dumping site, that should have occupied three times more space vanished by the beginning of the 1990s, when storm clouds started approaching to the environmental disaster of Trieste. The adoption of the legislation of the European Union had made by then impossible continuing a criminal action like the one that had been going on in Trieste, undisturbed, for thirty years. 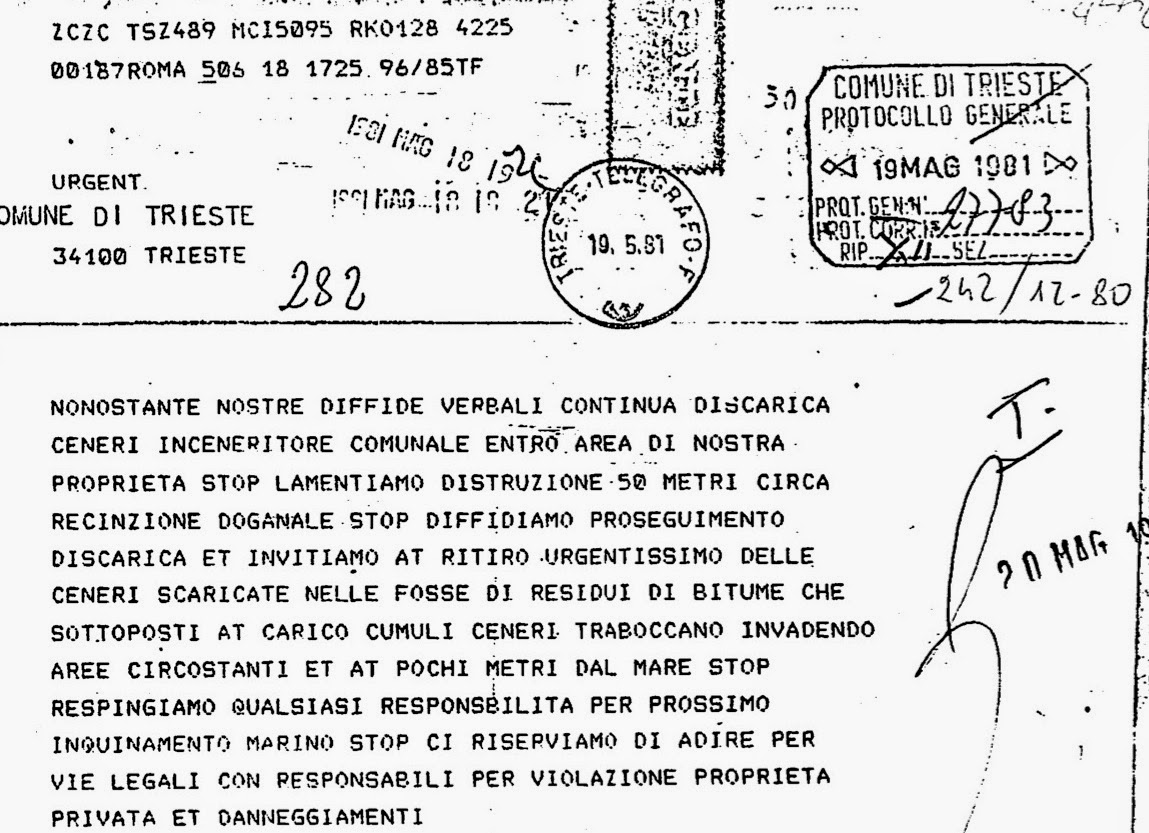 “Despite our verbal warnings, the dumping of ashes from the incineration plant continues…”

As for the realization epochal environmental disaster, the key role was that of many public companies, which had granted its fulfillment: IRI, Italsider, Italposte, and more. But the one who ordered it was always the same: the State of Italy. Where public companies could not take action, there it was time to directly address organized criminality: long before than in the Terra dei fuochi Italian mafias had practiced in the “Free” territory of Trieste.