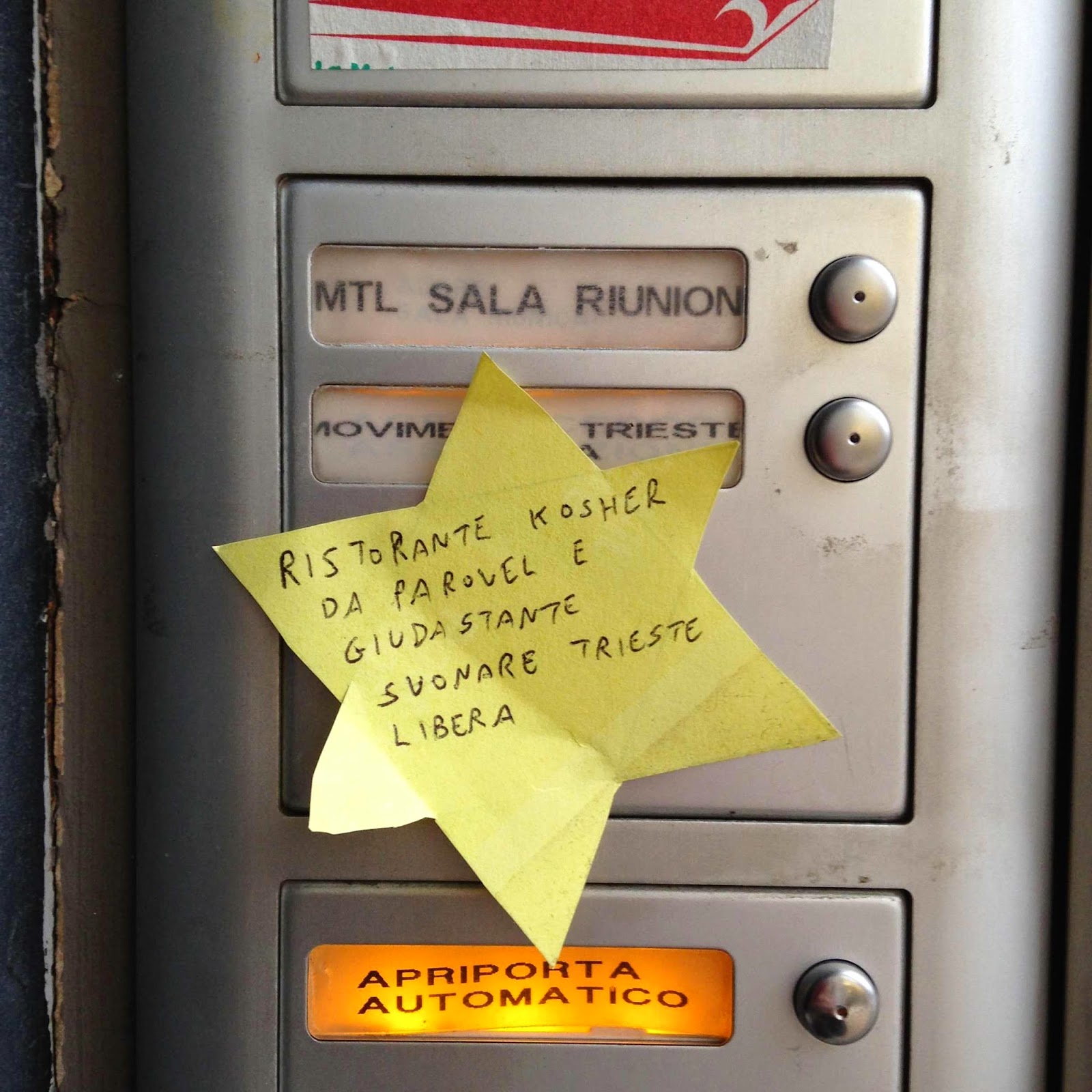 A FASCIST AGGRESSION AGAINST THE LEADERS OF THE FREE TRIESTE MOVEMENT IS TOLLERED BY THE ITALIAN GOVERNMENT, TEMPORARY ADMINISTRATOR OF ZONE A OF THE FREE TERRITORY OF TRIESTE.

We are used to be under siege. The Republic of Italy does not appreciate the acts of the Free Trieste Movement in defense of the citizens of the Free Territory of Trieste, an independent State established with the Treaty of Peace of 1947 at the end of that war Fascist Italy lost.

During three years of actions we had to cross many obstacles, but e were always sustained by the strength of our rights. We did always struggle and we did always defendo ourselves withe the arms of legality, which the State of Italy tramples on here, as it’s been decade since it has occupied – in violation of the Treaty of Peace – Zone A of the Free Territory of Trieste and its International Free Port.

The aggression has been triggered during this 2014, when the Free Trieste Movement has been seriously attacked with actions that caused a scission in the Movement itself. Yet, no matter what, we stood still and we keep resisting to all attempts to turn the only, popular pro-independence Movement of Trieste in a spare week of the rotten politics of Italian criminality.

The propaganda against us is implemented exploiting any media that the State of Italy can use. The main instrument of this aggression is the monopolistic newspaper “Il Piccolo” the press of the nationalistic legacy of Fascism since ever, forced to this territory be the “democratic” Republic of Masonic Mafias.

During the past months, after the creation of a separatist group namely said “Territorio Libero”, which declares the will to run for these elections the Republic of Italy forces in the Free Territory, recognizing, by doing so, its sovereignty, the attacks were intensified. A more and more violent propaganda that could even benefit of informatics and telematics media, broadcasting a defamatory campaign, especially against the writer, as President of Trieste Libera, and against journalist Paolo G. Parovel, director of the newspaper of our Movement (Trieste Libera News).

Since May of this year, we had denounced he dangerousness of the situation to the Public Authorities in charge of public safety and to the judicial authorities of the State of Italy, since we cannot defend ourselves and since there are no bodies properly appointed by the Italian Government.

The dangerousness of the situation depended on the fact that the aggressions, conduced more and more openly against us, coincided with the interests of the mafias that were violently infiltrating, even throughout the institutions, in the territory of Trieste in order to occupy, with obvious speculative operations, the Free Port to turn it into a touristic citadel.

A turnover of billions of Euro, to which we were the only real opposition, and this makes it easy to imagine the risks we were and are facing.

But the reaction of the State of Italy, put in front of such aggressions against us, has been hardly seen. So this campaign proceeded for months, inciting hatred against us. The Polizia Postale (Postal Police) as for what was developing on the front of social network Facebook, declared to have no means to contrast the public lynching.

And so, hundreds of outrages, offences, defamations, threats, could be broadcast through the net, without facing any opposition. Including death threats more and more alarming given what was going on. The denigration would then be repeated by the local media, to present the victims to public in a way that it would laugh them to scorn.

Personally, I have even been attacked for my medical conditions, as tendentious news was put in circulation in order to discredit me in front of public opinion. With no shame, by who, obviously, was aware that acting against me does not have consequences, considering the coverages granted to whoever does so, in spite of all laws. But then, again, to this point, we are no longer discussing legality. Because that is a very far away concept from what is happening not in Zone A of the Free Territory of Trieste.

The persecutors, to shout our mouths, did even require the expulsion from the ordine del giornalisti (professional association of journalists) of Paolo Parovel, director of out media.

And then, these environment of Fascist, Italian nationalism, acting unbothered with the support of the State of Italy, accused us to be supported and sponsored by the “hated” Zionists. This is one of the many accusations: “Tracks of legality in the FTM (Free Trieste Movement) thanks to Masonry and anti-Palestine Zionism it seems a good starting point for an alliance that can lead to positive results for the cause go the FTT…”.

This persecutory campaign kept going, uninterrupted and without causing any problem to whoever invented and conduced it, leading more and more serious threats to the security of the offended persons, portrayed as public target and undefended. This is how I have been called a traitor of the cause by the ones that had actually betrayed it, to the point I had to see my family name mangling in GIUDASTANTE.

An insult that has then been repeated in many of the viral attacks on the net. When it occurred that I had to denounce the appearing of this derogatory writing on the front wall of house to the local Procura della Repubblica (prosecutor’s office of the Republic), I could see with my own eyes, once again, the level of “interest” of Italian authorities: the writing is still there, after several months, as an advertise that (clearly) pleases these same authorities.

And so, the denigratory campaign became stronger and stronger, day by day, month after month, one wave after another of a ragefull assault, in the style of mafia and Fascism.

And newspaper Il Piccolo did not miss the occasion to rekindle any possible source of polemics agains who, here in Trieste, is standing for legality. So, even the fund-rising events, meaning dinners for the members of the Movement, have become something to laugh about. Obviously, with a racist aftertaste, Why? Our headquarter is in a historical building in which, back in early 1900, in the multiethnic Austrian-Hungarian Trieste, there was a kosher restaurant. The connection is soon made: the Free Trieste Movement, “funded” by Jews, continues the jewish tradition of kosher cooking. Much disliked to the environments of local powers, shaped in Fascist and ruling the city since decades.

Today, after the article of the local newspaper, we discovered a yellow Star of David attached  on the ringbelles at the entrano of our headquarter in Piazza della Borsa, they wrote something on it: “KOSHER RESTAURANT AT PAROVEL AND GIUDASTANTE RING TO TRIESTE LIBERA”.

Should we consider ourselves the chosen victims of the unopposed awakening of this anachronistic nationalism that smells like Mafia or do we have the right to defend ourselves? 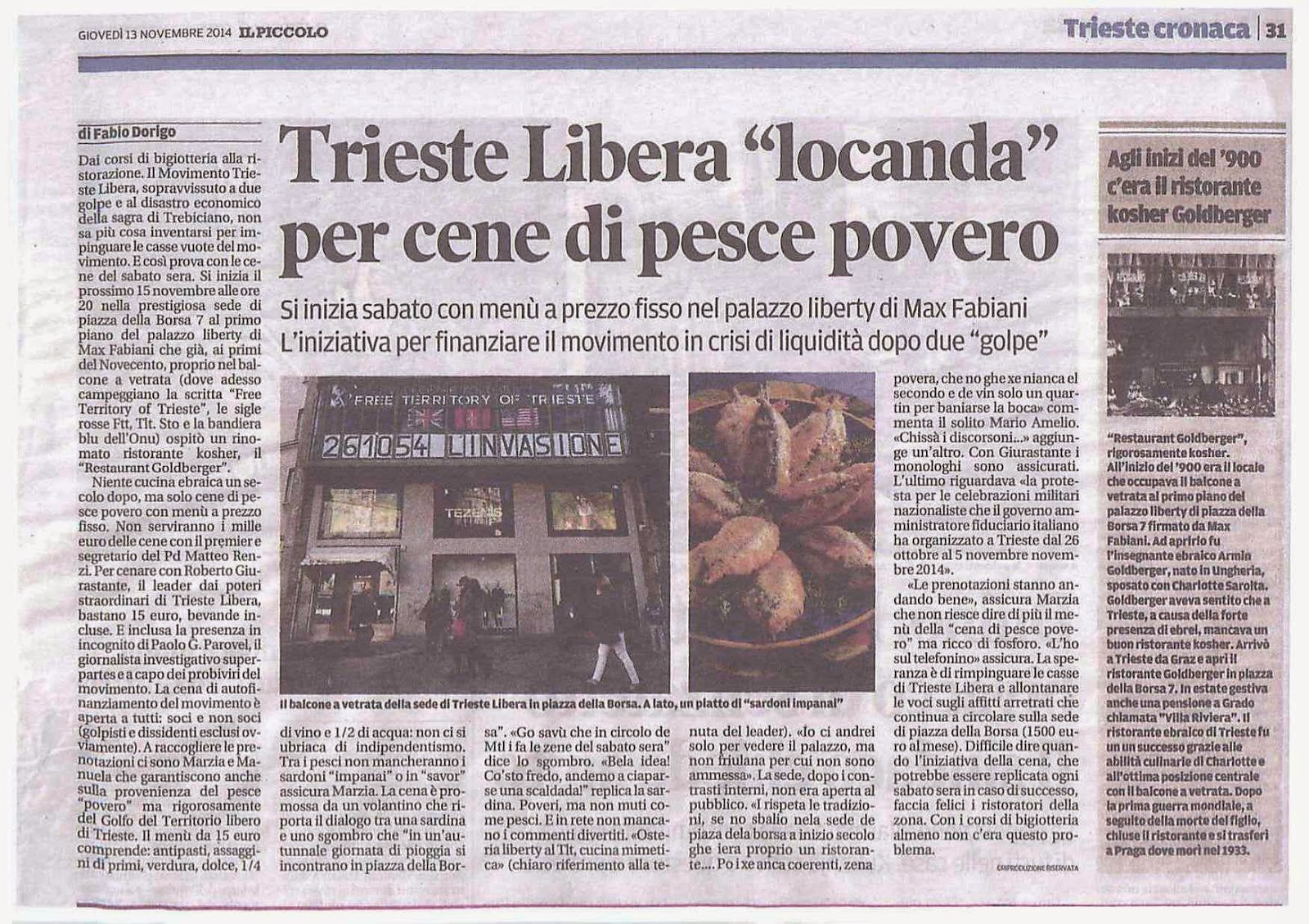 Translation of the article: Il_Piccolo

2 thoughts on “THE DIRTY, DANMED ANTI-SEMITES OF TRIESTE”