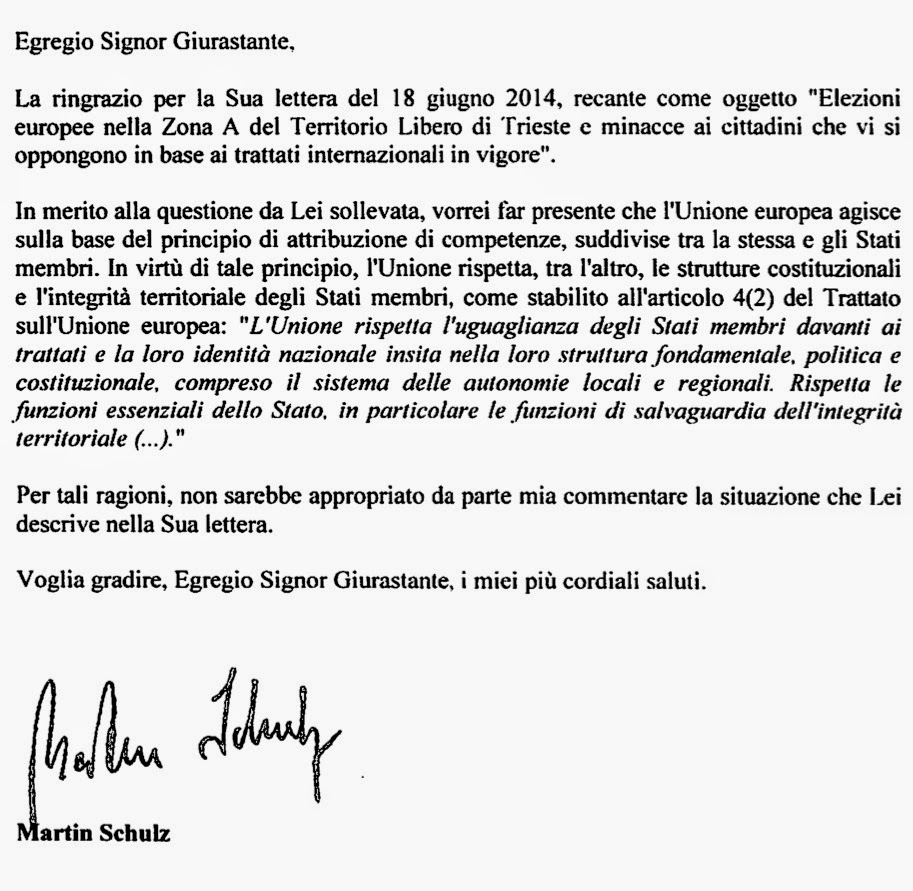 Original Italian version of the letter sent by Mr. Martin Schulz, President of the European Parliament, to Mr. Roberto Giurastante, President of the Free Trieste Movement. See translation at the bottom of the post.

TRIESTE AND THE ILLEGAL EUROPEAN ELECTIONS. MARTIN SCHULZ, PRESIDENT OF THE EU PARLIAMENT, ANSWERS FREE TRIESTE’S COMPLAINT.
Mr. Martin Schulz, President of the European Parliament, answers that “it would not be appropriate, on [his] side, commenting the situation You are describing in Your letter”.
This is the first answer of the EU’s representatives to Free Trieste’s complaint about the illegitimacy of EU elections in the present-day Free Territory of Trieste (former “Zone A”).
As President of the Free Trieste Movement, I denounced the latest European election [2014] and attached to my complaint 300 more documents. It is the forms, provided by the Movement, that Trieste’s people lodged at the polling stations, explaining why EU elections cannot take place in Trieste.
The EU authorities I addressed in my complaint are the European Commission and the President of the European Parliament.
Another document I attached is administrative judgment No. 530/13 by the the Regional Administrative Court for Friuli Venezia Giulia. That decision is one more evidence of the seriousness of the local Italian authorities to repress and silence Trieste’s citizens who dare claiming their rights established under the 1947 Treaty of Peace with Italy.
Indeed, the administrative Court rejected the appeal, accused the appellant (myself) of being “subversive” for daring to bringing the suit forward. According to the adminsitrative Court, my very legal action, supported ad adjuvandum by 56 more citizens, constitutes a threat to the Italian Republic’s national unity, hence the main appellant, Roberto Giurastante, should be prosecuted for the crimes against the State.
On the other side, the President of the EU Parliament is as uncertain as the EU appears. Indeed, since he cannot declare that Italy enjoys full sovereignty over Trieste, Mr. Schulz prefers avoiding to discuss the matter in the merit. Let us hope the European Commission does…
In the meantime, administrative judgment No. 530/13, after being impugned before the European Court of Human Rights, is to be brought to the attention of international authorities.
This judgment is going to be one of the evidences against the Italian authorities, because it shows their lack of compliance with the Italian Peace Treaty. Lack of compliance that goes beyond severe violations of civil rights. Indeed, the judgment claims that the international Free Port, a State Corporation of the Free Territory of Trieste, is instead under Italian sovereignty. If so, that Free Port does not exist, and this is indeed a damage for the whole International Community of States.

I thank you for Your letter of June 18th, 2014, whose subject is “European Elections in Zone A of the Free Territory of Trieste and threats to the citizens that oppose to that on the basis of international treaties, in force”.

As for the question You are rising, I would want to remind that the European Union acts in accordance with the principle of the distribution of competence, shared among itself and the Member States. In virtue of this principle, among others, the European Union respects the constitutional structures and territorial integrity of its Member States, as established with Article 4(2) of the Treaty on European Union “The Union shall respect the equality of Member States before the Treaties as well as their national identities, inherent in their fundamental structure political and constitutional, inclusive of regional and local self-government. It shall respect their essential State functions, including ensuring the territorial integrity of the State (…)”

For said reasons, it would not be appropriate, on my side, commenting the situation You are describing in Your letter.

2 thoughts on “A QUESTIONED VOTE”